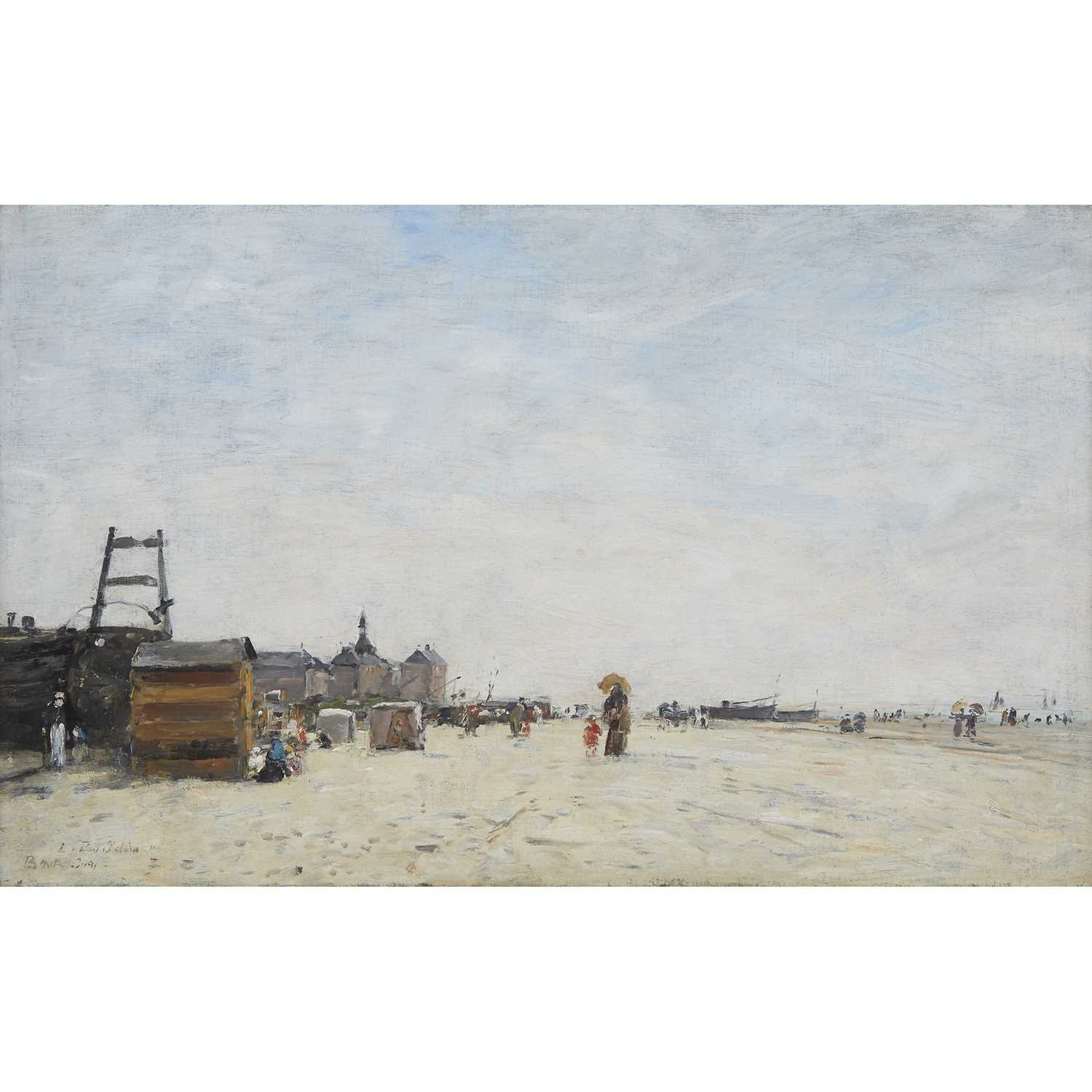 "By The Sea: Paintings by Eugène Boudin & His Fellow Impressionists," The Philadelphia Museum of Art, Philadelphia, Pennsylvania, July 1-September 1, 1991.

The son of a harbor captain, Boudin was born in Honfleur in 1824. While a young boy, the artist would accompany his father as a cabin boy on the steamboat ferry between Le Havre and his hometown. That Boudin would go on to capture the majesty of the sea so exquisitely and so extensively would only seem natural. However, he did not begin painting seriously until his early twenties, when the town of Le Havre awarded him with a three year scholarship, which prompted him to move to Paris and study there.
The Dutch painter Johan Jongkind (1819-1891) first encouraged Boudin to work outdoors, en plein air, a direct departure from the conventional, studio-based mode of the time, and a move that would foreshadow the Impressionist movement. Boudin created sketches, finely detailed pencil drawings, and watercolors at the seaside, and then returned to Paris to complete the full paintings in his studio in the winters. Boudin's skill at capturing the changing effects of light on the water and the sky are the hallmark of his work. The artist Jean-Baptiste-Camille Corot (1796-1875) once called him "le roi des ciels" (the king of the skies), and Boudin's submissions to the 1859 Paris Salon garnered praise from the poet Charles Baudelaire (1821-1867), who rhaposodized: "If you have had the leisure to acquaint yourself with these meteorological beauties, you will be able to verify, by memory, the exactness of Monsieur Boudin’s observations (...) all these depths, all these splendours, go to my head like an intoxicating liquor or like the eloquence of opium." ("Salon de 1859" in Curiosités Esthétiques, 1868, p. 334). The open and luminous quality of Boudin's works was a particular influence for the young Claude Monet (1840-1926), who met Boudin at age seventeen and worked alongside him. Under Boudin's tutelage, Monet moved away from caricature art, and began painting landscapes en plein air, learning to appreciate and capture the distinct effects of light that would define his style and later elevate him to prominence.
Boudin completed more than 120 paintings of Berck, the northern French seaside commune nestled between the English Channel and the tip of the river Authie. "La Plage de Berck" here depicts the wide, flat expanse of the beach, sand blending into sky in cool-hued colors. Several "Berckois" stroll along the beach, one lifts a parasol against the sun. The wide, confident brushstrokes in the screen of clouds are mimicked in the drawn trails in the sand. The scene is edged by buildings and boats, the water of the Channel only visible in the distance, speckled with people closer to the surf. Like most of Boudin's work, the present piece uses a linear perspective, approaching his subject straight on, perpendicular to the scene. In the mid-1800s, Berck became a destination for those convalescing from tuberculosis as the sea was believed to have curative powers for the sick. That, coupled with the ease of access with the newly expanded railway system, made Berck a popular enclave along the coast.