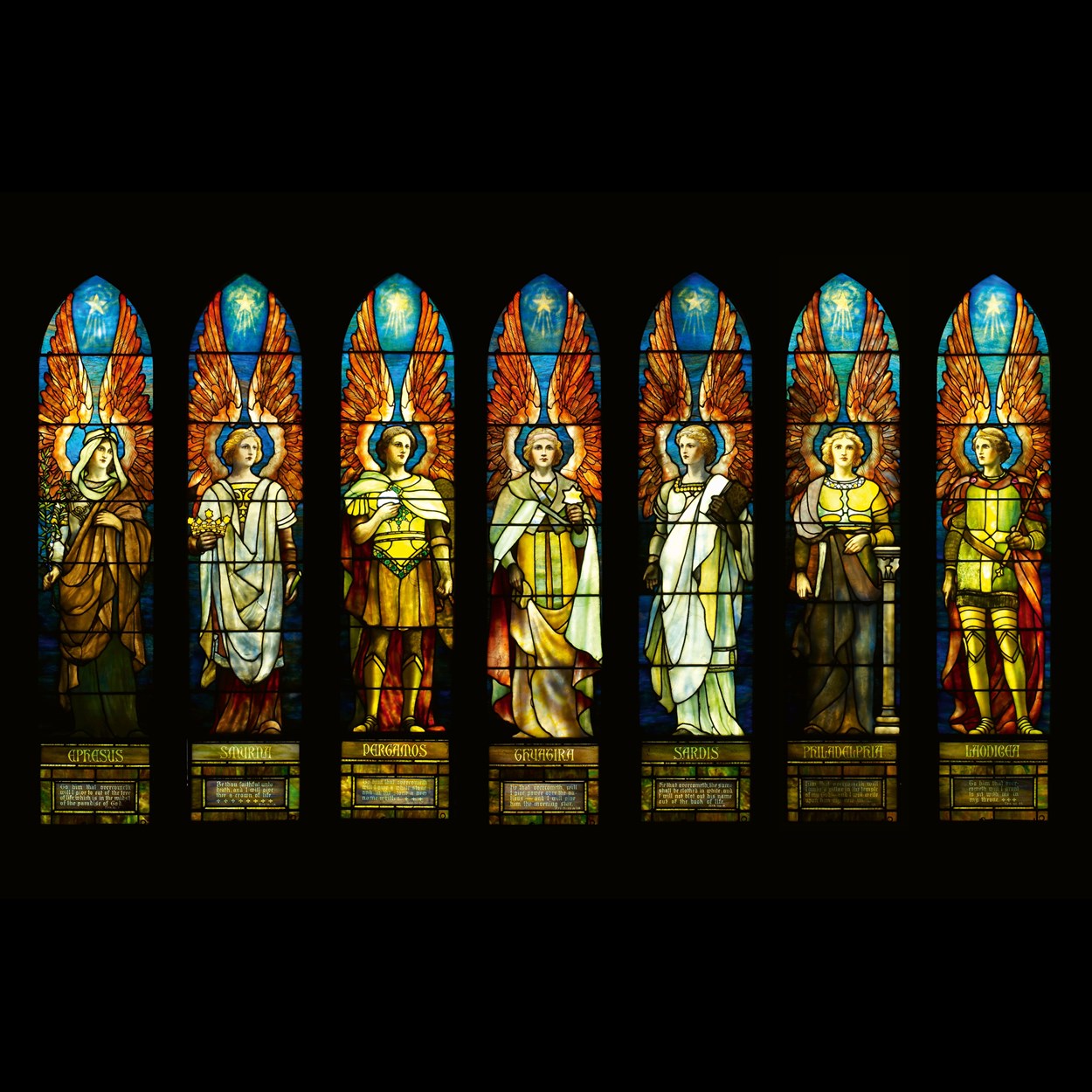 "FORGOTTEN BUT NOT GONE"

Encompassing a rare surviving set, Angels Representing Seven Churches is a series of seven life-size windows commissioned from Tiffany Studios in 1902 by the New Church Society in Glendale, Ohio for their "sister church," the Church of the New Jerusalem which was then under construction in Cincinnati's Walnut Hill neighborhood. The windows were gifted in the name of Charles and Mary Allen, who had been central to the Glendale church's founding. Once delivered and installed in the semi-circular apse behind the altar, the windows stood as prominent fixtures within the church for six decades, each representing one of the seven churches from the Bible's Book of Revelation, central to the Swedenborgian congregation's theology. Although the church was torn down in 1964 to make way for an interstate, the windows were saved from demolition. Stored in a series of local congregants' garages, the windows were eventually sold to the Swedenborgian Church at Temenos (now the Temenos Retreat Center) in southeastern Pennsylvania for a planned chapel. As years passed, the windows remained in a barn on the property, their history and journey a distant memory until 2001 when repairs to ceiling leaks in the barn precipitated their rediscovery and removal.

The windows were reviewed and assessed by noted restorer Arthur Femenella. Recognizing their beauty and historic significance, funds were raised to sensitively clean and stabilize the windows and prepare them for a traveling exhibition titled "In Company With Angels: Seven Rediscovered Tiffany Windows." The windows debuted with an exhibition at the Glencairn Museum in Bryn Athyn, Pennsylvania in January of 2007 and have since been exhibited at the Delaware Art Museum, Newcomb Art Gallery, Florida State University Museum of Fine Arts, Taft Museum of Art, Huntsville Museum of Art, Nevada Museum of Art, Springfield Museums (D'Amour Museum of Fine Art), University of Rochester Memorial Art Gallery, Urbana University, Montgomery Museum of Fine Arts, Historic Waco Foundation and Lee Lockwood Scottish Rite Library & Museum, Oshkosh Public Museum, Texas A&M University Forsyth Galleries, Munson-Williams-Proctor Arts Institute, and most recently at the Museum of Russian Icons in 2016.

Louis Comfort Tiffany (1848-1933), son of Charles Lewis Tiffany (1812-1902), began experimenting with glass in the 1870s, and by the 1890s his firm Tiffany Glass & Decorating Company - later renamed Tiffany Studios - was one of the most influential and widely-acclaimed designers of interiors and decorative arts, commissioned to produce interiors for public and civic projects as well as the homes of the Gilded Age's elite. Along with John La Farge (1835-1910), Tiffany created a "renaissance in stained glass." Working with patents for opalescent glass alongside colored, plated, textured, flashed, etched and enameled glass, artists at Tiffany's glass studio in Corona, Queens, New York, created masterworks of leaded glass windows, lighting, and free-blown vases and decorative objects.

New sources of wealth in America following the Civil War coupled with socio-religious factors saw the creation of new or refurbished religious edifices in the modern taste. A savvy self-promoter, Tiffany created a chapel interior of leaded glass windows, mosaic columns, and a magnificent chandelier at the 1893 World's Columbian Exposition in Chicago which garnered the firm unprecedented exposure, public accolades, and further ecclesiastical commissions. "Ecclesiastical figurative windows, the mainstay of the Tiffany firm's production," writes Alice Cooney Frelinghuysen, the Anthony W. and Lulu C. Wang Curator of American Decorative Arts at the Metropolitan Museum of Art, "presented an unparalleled opportunity to showcase the ingenuity of its depictions of drapery in lustrous colors and, more importantly, its rendering of folds with manipulated glass, not paint."

Presenting with a program of innovative techniques and thoughtful glass section, Angels Representing Seven Churches are respectively titled Ephesus, Smyrna, Pergamos, Thyatira, Sardis, Philadelphia, and Laodicea. Each window presents a centralized angel in a naturalistic contrapposto stance beneath a radiant star. The symmetrical wings of each assist in guiding one's eye north, as is so often intended with the vertical elements in religious architecture. Furthermore, when this rare series is viewed as a comprehensive group, the pronounced geometry of the wings is echoed between windows - additionally united by a related color palette of jewel-like tones of burnt sienna and ochre - further emphasizing the graphic and visual impact of the series. The glass panes are executed in richly saturated and expansive rainbow hues, ranging from deep ruby red in the wings, to vibrant yellows in the figures' drapery to aqua and cobalt blues in the evening sky. The windows expertly demonstrate Tiffany Studios' skill and innovation with "painting with glass" via the thoughtful design and pane selections, presenting with deep folds of drapery glass, acid-etched and painted facial features and the inclusion of cut-glass "jewels." Under the supervision of the English-born glass-maker Arthur J. Nash and head of Tiffany's ecclesiastical department Frederick Wilson, the Angel windows are of a figurative type favored by ecclesiastical patrons, often as memorial windows, gifted in the name and/or memory of a loved one. The seven Angels are depicted with a blend of human features and spiritual imagery, brought to life through the Tiffany Studios' artistry. Referenced in Tiffany's promotional literature in 1910, the windows showcase the best of the firm's production in leaded glass windows.