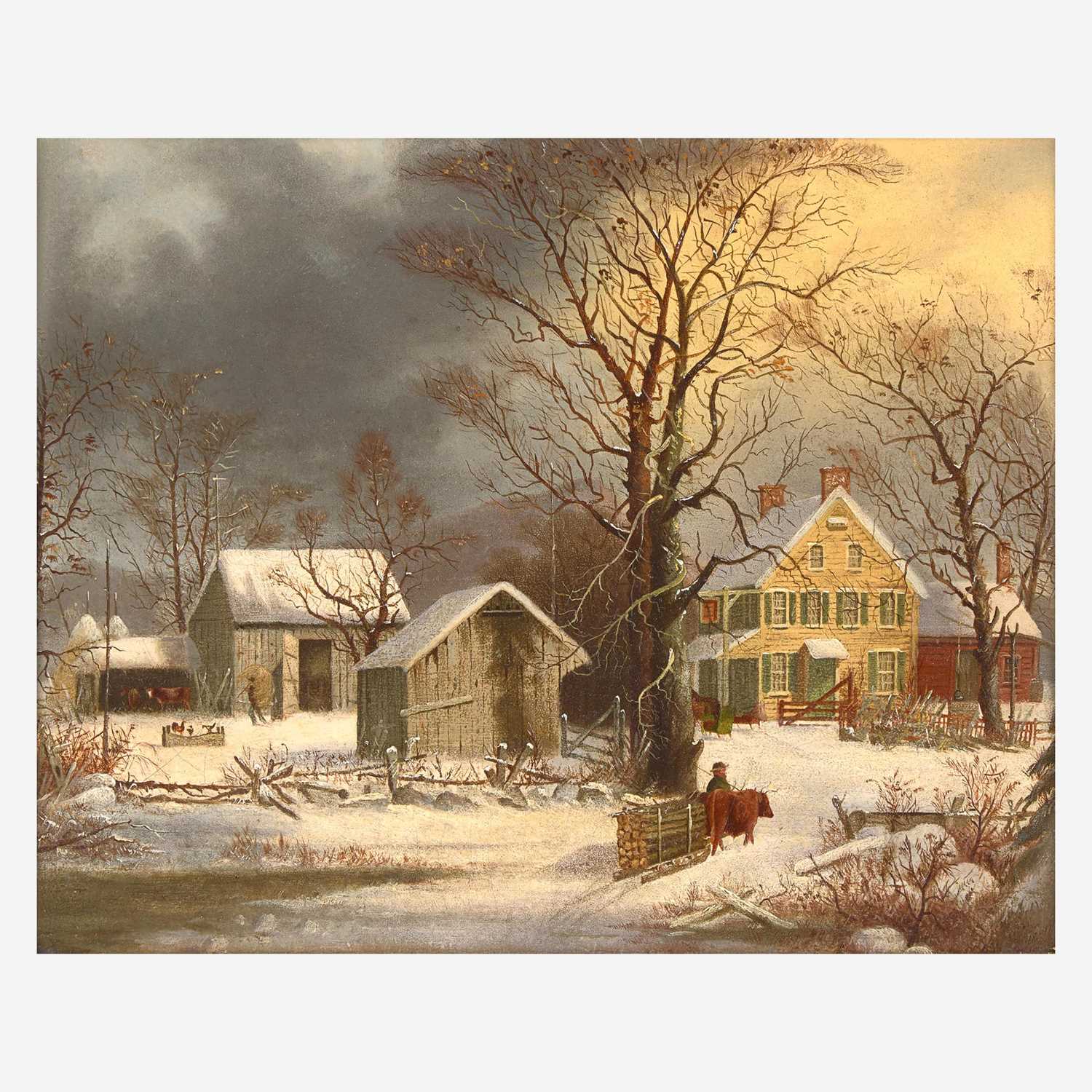 Winter in the Country, A Cold Morning is a well-known composition by George Henry Durrie, dating from the end of his career. Several other versions of this painting exist, each bearing the same title derived from a lithograph published by Currier and Ives in 1864. While the first version (now in a private Collection) dates from 1861, Durrie is known to have added details in each variant over the years. In 1862 for example, he repeated the original 1861 composition but replaced the man and dog on the road with an ox sledge and a man walking towards the inn (version now at the Shelburne Museum). This secon version added interest, and proved to be commercially succesful as it led to larger versions of the ox sledge alone. Durrie proceeded to paint the composition several times in this size between 1861 and 1863, and in smaller versions as well - some signed and some unsigned. In all of the versions Durrie produced (some on canvas, others on panel; some larger than others; some signed and others not), the artist kept the bright yellow house with green shutters, the gray barns and surrounding outbuildings, the smattering of chickens, and the towering bare tree, as exemplified in the present work. For another close version of this painting, see for example the version sold at Heritage Auctions, Dallas, on June 10, 2009, lot 77012.

According to Dr. Martha Hutson-Saxton, the present work was still in Durrie's studio at the time of his death in 1863. That would explain the lack of signature, but also the absence genre details the artist would have integrated into the composition such as figures standing in front of the cottage, smoke coming from the chimney, or white snow dusted throughout the landscape. By the same token, this also means the work was not touched by Durrie's brothers, who were known for finishing his woprk after his death. As Hutson-Saxton states it, the present work realies on "a major composition for the artist," and given the rarity of the artist's work, should still be considered a "treasure" today. Dating from the end of the artist's life, the painting also shows the height of his stylistic development at the time, and can be seen as one of his most telling contributions to native winter landscape painting.

We wish to thank Martha Hutson-Saxton for her kind assistance in cataloguing the present lot.