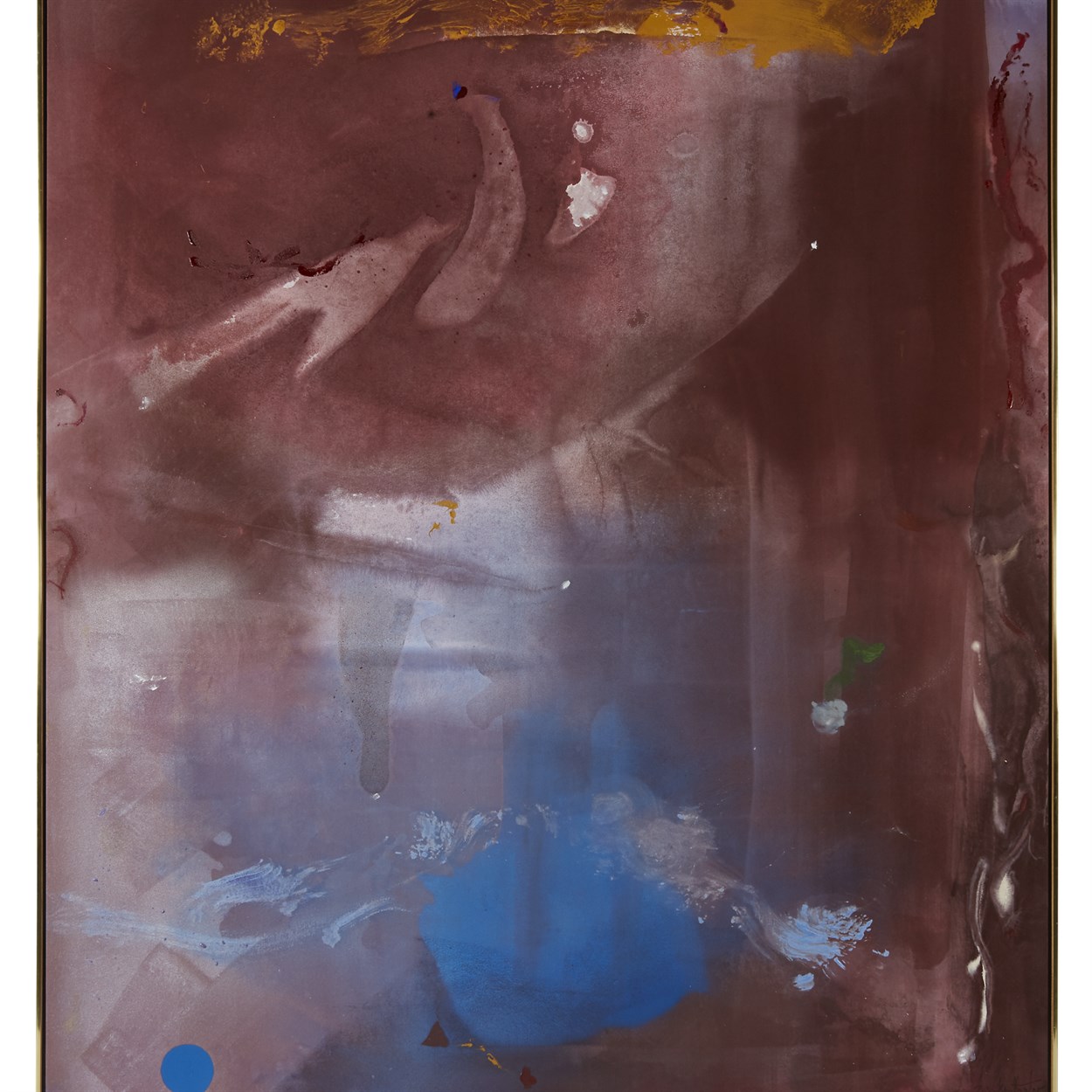 NOTE:
This lot is accompanied by a photocopy of the bill of sale from The Heath Gallery, Atlanta, Georgia.

NOTE:
This lot is accompanied by a photocopy of the bill of sale from The Heath Gallery, Atlanta, Georgia.

Painted in sweeping layers of ochre, umber, sienna, grey and azure blue, Cinquecento evokes the palette and grandeur of 16th Century Italian art referenced in its title. The artist's signature technique of staining an unprimed canvas with diluted paints is employed to dramatic effect here, with added translucent bands of white that glimmer and oscillate as sunlight might play across its surface, while darker greys and browns add depth, richness and dimension. Indeed, having studied Old Master painting under Paul Feeley at Benington College in her early years, Frankenthaler was surely very familiar with both the rich palettes and chiaroscuro technique (dramatic use of light and shadow) first employed by Renaissance masters Michelangelo, Raphael and Titian. And yet here, Frankenthaler, while referencing these giants of the 16th Century, also eschews their realism and narrative in favor of her loose abstraction.

Cinquecento also shows elements of the artist's employment of cubist-like structural elements that more and more become counterpoints to her stains in pictures of the mid-1980s onwards. Here, the gold band which is more painterly than stained across the top announces the composition's vertical boundary, while out of the shimmering sienna and play of white light at center emerge vertically undulating lines that gently announce and define the right side of the canvas. In a final, decidedly intentional punctuation mark, the solitary azure blue orb at bottom left serves as a pointed contrast to the organic fluidity that pervades the canvas.

The artist herself relished the exploration of simultaneously contrasting techniques and elements within a single picture: "My feeling [is] that a successful abstract painting plays with space on all different levels, different speeds, with different perspectives, and at the same time remains flat... For me the most beautiful pictures of any age have this ambiguity" (A. Rowley, Helen Frankenthaler, p. 46).

Born in New York City in 1928, Helen Frankenthaler came to be one of the most prominent female artists of the second half of the 20thcentury. She studied at Bennington College and was a student of famed artists Rufino Tamayo and Hans Hoffman, and went on to be a leading figure of New York’s Color Field painters; later in life, she settled in Darien, Connecticut, where she established ahome and studio.Frankenthaler’s abstract paintings and prints are very popular with Freeman’s buyers, given her prominent status as one of the premier female artists of the 20thcentury. Her acrylic on canvas Cinquecentoachieved a remarkable $598,000 in 2018, surpassing its pre-sale high estimate; Red Hotsold for $137,500 in 2019. Her highly decorative color woodcut and pochoir prints from Tales of Genjisold well above their estimates ($75,000 and $43,750, both in 2017). Frankenthaler’s distinctive paintings rendered in both acrylic and oil are in high market demand, and Freeman’s maintains a strong track record in their auction performance.Frankenthaler’s produced her iconic “soak-stain” paintings by pouring paint on unprimed canvas, often in a large format, producing what she called “a really good picture...as if it’s happened at once.” She is credited with helping to bridge the divide between two major art movements—Abstract Expressionism and Color Field painting—an accomplishment described by the artist Morris Louis as “a bridge from Pollock to what is possible.” Her style evolved from centered compositions to the use of more organic forms, then finally on to more symmetrical paintings. Frankenthaler was a prolific printmaker, sculptor, and ceramicist in addition to a masterful painter; her works have been featured in numerous major museum exhibitions at the Whitney Museum of American Art, the Museum of Modern Art, and the Jewish Museum, among others.