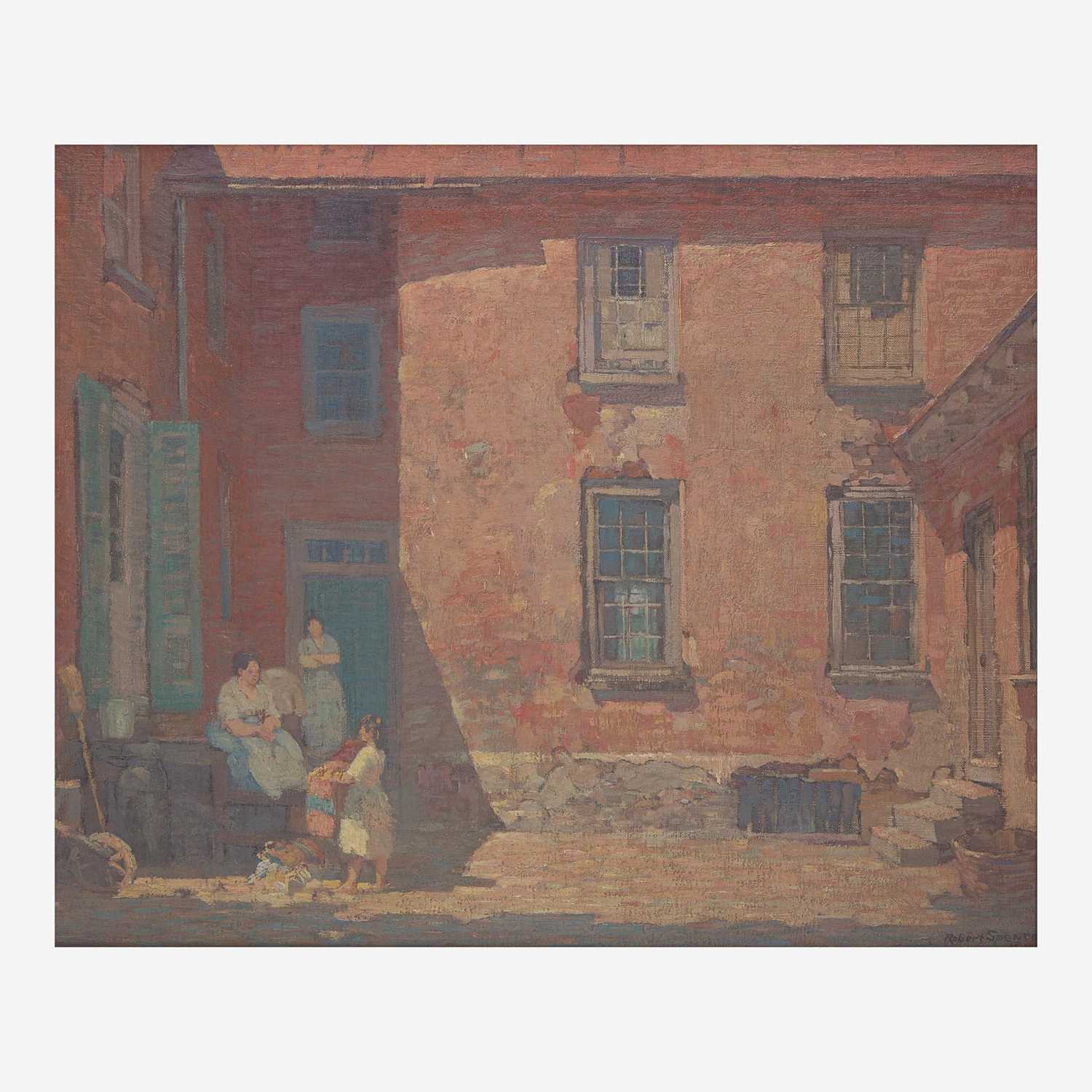 After spending most of the first decade of the 20th century in Bucks County, and along the Delaware River, Robert Spencer shifted his attention to other settings, New York City's docks and harbors for example, but also further away, in Europe, where he depicted their canals, bridges, towns and houses. Despite its very Italian theme, the present work was likely executed in America, near Bucks County, and before the artist's trip to Europe. It belongs to a series of several canvases (at least three) centered on an open courtyard at various hours of the day, from dawn to dusk, and featuring the daily activities of its inhabitants (see -with varying details- Courtyard at Dusk, 1913, from Fine Arts Museums of San Francisco, California; and The Courtyard, circa 1916 at the Memphis Brooks Museum of Art, Memphis, Tennessee). Courtyard at Noon is probably the quietest of the series, as it only features three figures (all women) in the titular courtyard. Gathered in a corner, they appear to enjoy a break from their chores, while the men are likely out working. Executed in a limited palette of salmon pinks, turquoise blues and grey, the work still is charged with the brightness of the midday sun, which conveys a relaxed, and cheerful atmosphere to the scene. The dappled brushwork has a strong impressionistic feel to it, which suggests the artist worked on the spot, quickly before the sun's course moved too quickly. It also echoes the palpable excitement of Spencer, who according to Brian H. Peterson "had fallen in love with a real place that he tried to depict realistically, even though he almost certainly changed elements of the scene to enhance its picturesqueness." Beyond Spencer's painstaking attention to detail in this canvas, the picture also charms by its evident appreciation for the poetry of a modest yet distinctive building, which witnesses the many lifes of the people who live there. True to the artist's education at the National Academy of Design, the painting also recalls the many courtyard scenes of 17th century Dutch painter Pieter de Hooch, from whom Spencer seems to have borrowed the vision of a domestic simplicity, and tranquility.