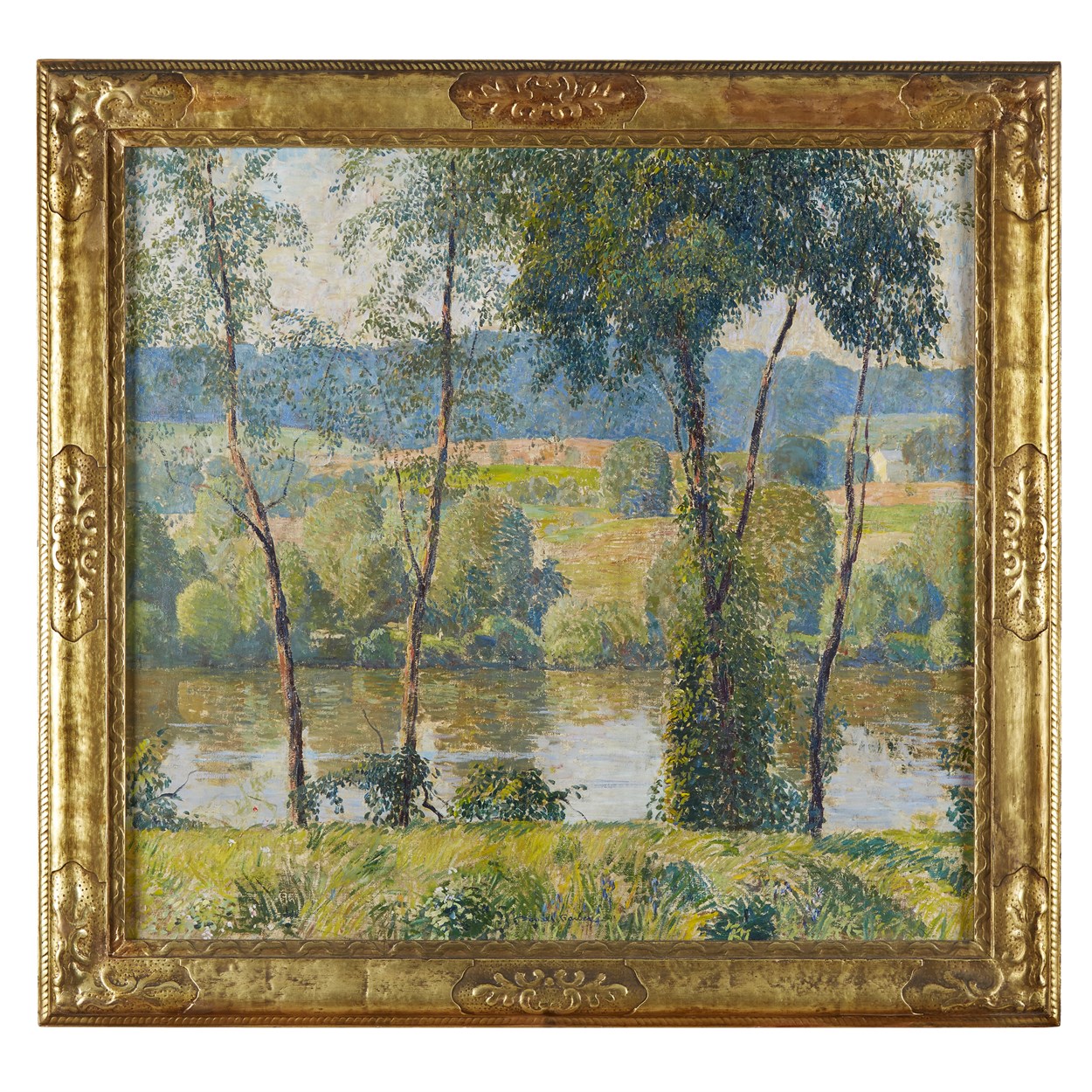 After two years studying abroad in Europe, Daniel Garber returned to the United States in 1907, and settled with his family in Bucks County - just thirty miles outside of Philadelphia. The artist had been introduced to the area in the early 1900s by the painter William Lathrop (then the leader of the New Hope School), and immediately felt enchanted by the region's bucolic atmosphere. The Garber farm house, located in Cuttalossa Glen and today known as "Cuttalossa," offered direct access to the nearby Delaware River Valley, which Garber explored in search of inspiration and scenic views. As Metropolitan Museum of Art Curator Sylvia Yount explains, "It was from his home base at Cuttalossa that Garber built his life - his career as a teacher, his reputation as a painter, and of course his work: vistas of quarries and forests along the Delaware; calm, transcendental domestic scenes with his family as subjects." Garber took great care of his property and turned it into his own idealized haven, tearing certain buildings down while allowing others to decay picturesquely until the property resembled the world he envisioned, a certain extension of himself. As the artist confessed to his cousin George, "to know me now you would have to know the place. Everyone knows it's half of me."
Unlike other fellow Bucks County artists such as Edward Redfield, Walter Schofield or Fern Coppedge, who often depicted the Pennsylvania landscape blanketed in the snow, Garber preferred to paint the more temperate seasons, especially spring and summer. The present painting is no exception. By The River depicts thin strands of water birches and young elm trees growing along the Delaware River's bank, with fresh rolling hills in the distance. The warm afternoon light, diffused through the newly green leaves, softly dapples on the surface of the golden river stream and contributes to the tranquility of the scene. Executed in June of 1929 from River Road, down toward Centre Bridge, By The River is reminiscent of Garber's decorative oils of the previous decade, in which the picture's foreground is occupied by heavily massed vertical groupings of trees, and often includes draping vines to create a lacy effect. Yet the canvas introduces an important stylistic change in the artist's career. It is marked by a new level of sophistication in his use of colors and light, and by a bold taste for highly structured compositions. As the artist confesses, "now I'm interested in the less obvious, the more suggestive and subtle things that gets me."
In By The River, Garber spreads the tree formations across the canvas in a rhythmic manner, and goes deeper into the picture plane than in his previous works. All connected to each other through their rich green foliage, the trees blend nicely in a hazy, dreamlike vision which is accentuated by the subtle hues in the background. Here, the artist renounces his typical browns and blacks to adopt a lighter palette of deep blues, intense oranges, and soft lavender pigments. Unlike the French impressionists who mixed their colors onto the canvas, Garber applies the paint in a very meticulous and intricate fashion, keeping each varisized brushstroke separate, each color intact. In the end, Garber achieves his "tapestry-like" effect - an addition of layers (or curtains, as he taught his students) running parallel to the picture plane, thus contributing to an illusion of depth and strong harmony.
Although Garber was trained to paint en plein-air and did not rely on the use of preparatory sketches, his landscapes are more than factual representations of his beloved Bucks County. However realistic and faithful they may be, his views mainly serve as a channel to communicate the beauty and serenity of a moment the artist informally witnessed. By The River invites the viewer to penetrate a privileged world depleted of its inhabitants, an earthly paradise disconnected from the crude reality. As an anonymous critic once said, "there is a serenity, and all's well with the world" in Garber's work. Such a statement could very well apply to the idyllic By The River, as it majestically translates into paint the longing memory of a warm sunny day. The artist must have taken some pride in this Edenic landscape, as he exhibited By The River only four months after its completion at the Carnegie Institute of Art, where the painting was directly bought by an eminent art collector from Pittsburgh.