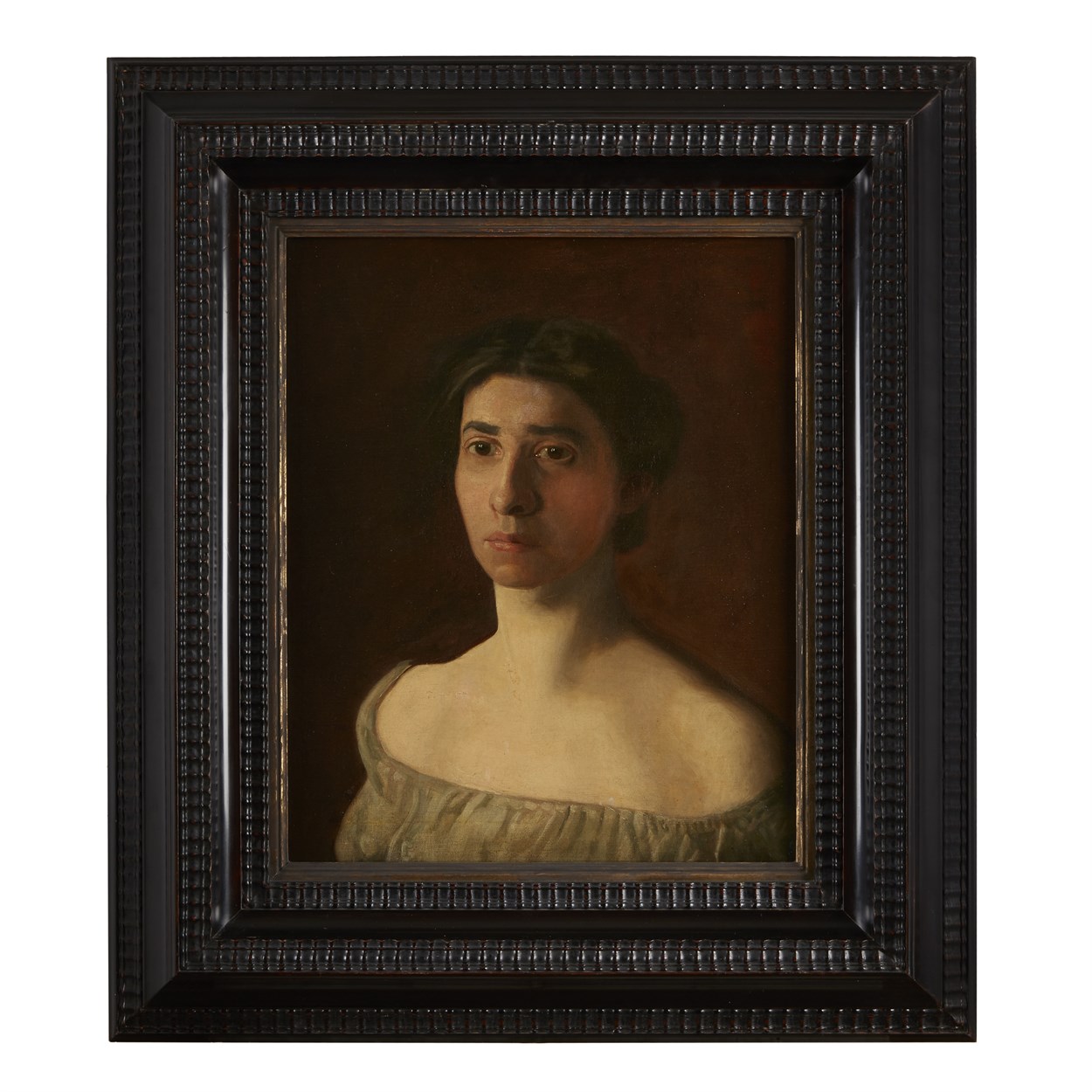 According to records, originally inscribed in sitter's brother's hand 'Elanor S.F. Pue by Thomas Eakins, 1908' verso, oil on canvas
In a Wilner frame.

According to records, originally inscribed in sitter's brother's hand 'Elanor S.F. Pue by Thomas Eakins, 1908' verso, oil on canvas
In a Wilner frame.

"One Hundred-Third Annual Exhibition of the Pennsylvania Academy of Fine Arts," Philadelphia, January 20-February 29, 1908 (exhibited as "Head of a Lady").

The present lot will be accompanied by three letters from the artist regarding arrangements for the painting of Miss Pue's portrait. Two of them are dated June 30, 1907 and August 3, 1907. The third letter (undated) reads: "My dear Miss Pue/On the 8th I meet the/National Academicians at their/annual banquet in New York./I want to make a/little painting of your head. Could/you come up tomorrow Tuesday/morning about 9 o'clock?/You might bring a dress/or two or short waist, that we may/fix a pose. I will give you the/study but you must lend it to me/if I want it for exhibition purposes./Yours truly/Thomas Eakins."

Born in Philadelphia in 1844, Thomas Eakins started his career in a very traditional way, first enrolling at the Pennsylvania Academy of the Fine Arts in 1862, and then training at the École des Beaux-Arts in Paris. Although he is now regarded as one of the greatest realist painters of the late 19th and early 20th century, his talent was not widely acknowledged until his death in 1916. Many critics of his time disapproved of his modern subjects and of his style, which they considered crude. In 1894, the artist himself bitterly noted he was honored by "misunderstanding, persecution and neglect." Eakins first began his career painting historical and genre subjects, including rowers and wrestlers. By the early 20th century, he turned to portraiture instead, fulfilling his interest in capturing the human figure. Eakins' portraits are deeply rooted in reality. Instead of depicting his sitters idealistically, he chose to work meticulously from life, emphasizing the realistic flesh and blood qualities of the individuals who posed for him. Eakins particularly enjoyed painting young ladies and was considered the "interpreter of women" by Lloyd Goodrich, his first biographer. He painted them objectively and was interested in accentuating their inner-life, and most importantly their inner-thoughts. With their melancholic air and dreamy, unfocused gaze, each model appears self-assured, with a unique personality.
Dated 1907, the Portrait of Miss Eleanor Pue is among the last portraits of young women Thomas Eakins painted in his career. Eakins met Miss Pue at a party when she was twenty years old. Taken with Eleanor's striking appearance, he stared at her the entire night and followed her throughout the room. He later sent her a letter asking if he could "make a little painting of [her] head." Pue was hesitant at first as she knew Eakins' scandalous reputation with women all too well, and was afraid he would make advances. She eventually accepted and posed for Eakins three or four mornings a week. Eakins had her wear a very low-necked gown, a trend that can be observed in other portraits of women he made after 1900. While she posed, he complimented her features, admired the bones of her shoulders and chest, and would poke at them with the handle of his brush and say "beautiful bones." Pue's mother is said to have cried when she discovered the finished portrait. Pue herself loathed it. When it was exhibited at the Pennsylvania Academy in 1908, her friends mocked her and nicknamed the portrait "The Goddess of Murder." According to 19th century standards of beauty, the portrait is not the least bit flattering. Eakins seemed to have fully recreated all of Miss Pue's physical imperfections, namely her small head, long nose and low forehead. While the sitter appears somewhat forlorn, the portrait simultaneously conveys a striking sense of vitality. The darkish tones of Pue's face contrast with the pallor of her neck and chest. This makes her stand out in a surreal way, almost like an apparition. Eakins specifically draws attention to the energy of her body beneath the clothes. The shoulders and the bosom are painted with a vigor and a gravity characteristic of Eakins' portraits at the turn of the century. Eakins' portraits were not intended to please the sitter; they were more important than artistic flattery. It was mainly an occasion for him to satisfy artistic needs and experiments. The strength and rawness of Miss Pue's portrait ultimately exemplifies the depth and revealing nature with which Eakins painted.