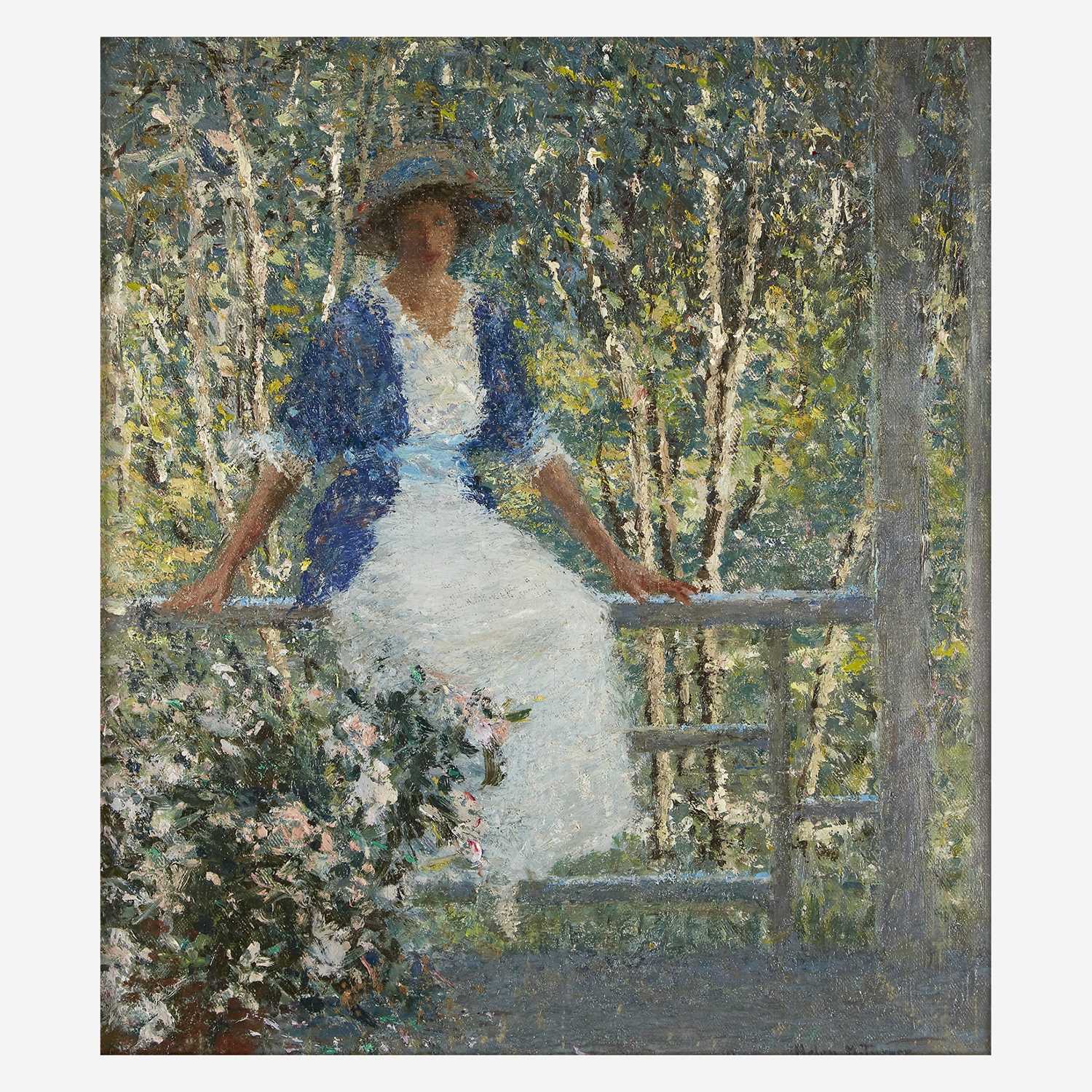 Although she was born in Kentucky in 1858, Helen Maria Turner spent most of her life in the state of Louisiana, and especially in New Orleans, where her family was well-connected. The great-granddaughter of John Pintard, founder of the New York Historical Society and the American Academy of Fine Arts, Turner did not start painting until she was twenty-two. Unlike most of her fellow women artists, she did not seek an education abroad. Instead, she focused on an intense, all-American curriculum, enrolling at Tulane University, the Artist's Association of New Orleans, the Art Students League in New York as well as the Women's Art School in Cooper Union, respectively.

Most of Turner's oeuvre is characterized by her broken, almost pointillist technique and her golden palette, as revealed by the present work, which depicts the young artist herself, sitting nonchalantly upon a porch-rail, and looking directly at the viewer. The work, which earned many celebratory comments when exhibited in 1914-1915, was painted at Cragsmoor, an artist's colony located in the Shawanguck Mountains of upstate New York that Charles C. Curran and his wife, Grace introduced to the artist. In an article entitled "Cragsmoor, an early American art colony," Barbara Buff describes the colony as a haven for artists seeking refuge from industrialization and a return to nature: "Farmers had been clearing the land so that by 1872, there were superb views of surrounding valleys and mountains in every direction. The light and the sky were wonderfully clear and changed often; the air was pure; and breezes blew almost constantly. These were the qualities that attracted artists to Cragsmoor. Throughout its history and even today, the place is also referred to simply as 'The Mountain.'" Turner spent almost all of her summers there from 1906 onwards, and after renting for some time, decided to build her own cottage, which she named Takusan.

At Crasgmoor, while many artists such as Curran, George Inness or William Beard painted open air vistas featuring the nearby forest or meadows, Turner did not venture further than the front of her cottage and rather than depicting the wilderness, she preferred to focus on her flowers and her garden, which the lush, grassy and textured background in the present painting hints at. The artist's front porch at Takusan specifically, was the setting for several of her most acclaimed paintings. Placing an elegant young woman on it, with a garden backdrop in fact became such a winning formula that Turner would go on to repeat in a number of her finest paintings from 1912 to 1923, starting with Summer, Tea Party (Tweed Museum of Art, University of Minnesota), and including Girl with Lantern (Greenville County Museum of Art, Greenville, South Carolina), Morning (Zigler Museum of Art, Jennings, Louisiana), The Flower Girl (The Detroit Institute of Arts, Detroit, Michigan), Lilies, Lanterns and Sunshine (The Chrysler Museum of Art, Norfolk, Virginia), as well as the present work, The End of my Porch.

In the painting, like John Singer Sargent, Curran and Frederick Carl Frieseke before her, Turner immortalizes the poetry of a solitary moment outdoors. She depicted herself in an elegant, light white dress, which perfectly captures the glittering effects of the summer light. The dress is marked by a dashing blue sash at the waist, the only bright color in the composition, which nicely echoes the horizontality of the sitter's hands as well as porch railing, and which subtly contrasts with the verticality of the backdrop, marked by the elegant branches of Turner's birch trees. The result is a perfectly harmonious arrangement of lines, captured in thick brushtrokes, which, when admired from afar, creates an immediate visual sensation of a dazzling summer day from the shade of a well-appreciated porch.

Turner's string of successes with her "woman on a porch" paintings directly led her to being elected a member of the National Academy of Design. Following her success, she shifted her focus to commissioned portrait paintings, and gradually abandoned her favored theme.