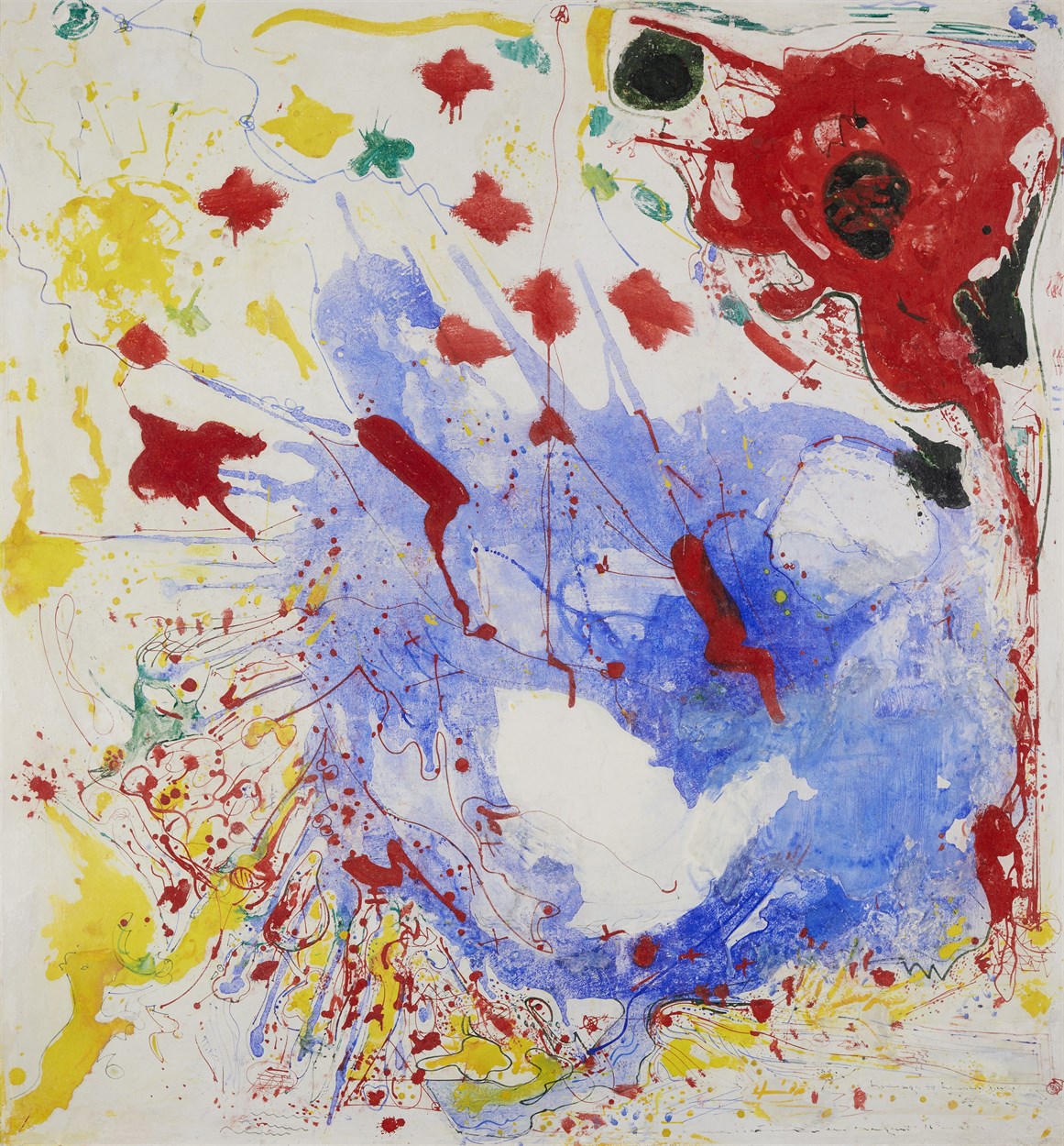 NOTE:
This painting has been requested for inclusion in the exhibition, Hans Hofmann: The Nature of Abstraction, which will take place at the University of California at Berkeley Art Museum and Pacific Film Archive from February 27 - July 21, 2019, curated by Lucinda Barnes.
It is also accompanied by a photocopy of the bill of sale from the André Emmerich Gallery, New York.

Composed of organic calligraphic forms, swirling colors, irregular pulsating shapes and explosive splashes of paint, Cataclysm was painted during a pivotal period of experimentation in Hans Hofmann's career, when he first began to explore abstraction. Until the mid-1940s, Hofmann's artwork focused on the same three subject matter- still lifes, interiors and landscapes. During this period, the artist began to abandon recognizable imagery and constructed compositions for open brushwork, free forms, drips and puddles. Indeed, critic Clement Greenberg points to Cataclysm as a groundbreaking composition in that it in fact pre-dates Jackson Pollock's later famous "drip," or more accurately "pour and spatter" method. Cataclysm, Greenberg wrote in 1961, was one of the "first I know of to state the dissatisfaction with the facile, 'handwritten' edges left by the brush, stick or knife which animates the most radical painting of the present. The open calligraphy and 'free' shapes that rule in Abstract Expressionism were foretold in many other pictures Hofmann did before 1948…"

Perhaps because of these new styles, Hofmann began to achieve recognition as an artist in his own right, after decades of devoting himself to teaching. An instrumental figure in this success was influential writer and dealer Howard Putzel, to whom the present painting is dedicated. Putzel, along with Jackson Pollock and Lee Krasner persuaded Peggy Guggenheim to grant Hofmann his first solo exhibition at her distinguished Art of this Century Gallery in 1944. Putzel was an early and passionate advocate for Hofmann and this new style of painting. In 1945, after opening Gallery 67, he organized the exhibition "A Problem for Critics," which included artists Pollock, Rothko and Hofmann in an attempt to explore and define what was later termed "Expressionism." Putzel also exhibited Hofmann's work in a one-man show in the spring of this same year. Tragically, Putzel died suddenly in August of 1945, in the days between the American bombings on Hiroshima and Nagasaki. The present painting, with its explosive splashes of pigment, was executed shortly thereafter. Cataclysm is both an homage to a dear friend and patron, and a poignant and heartfelt reaction to the disastrous political events that had just occurred.