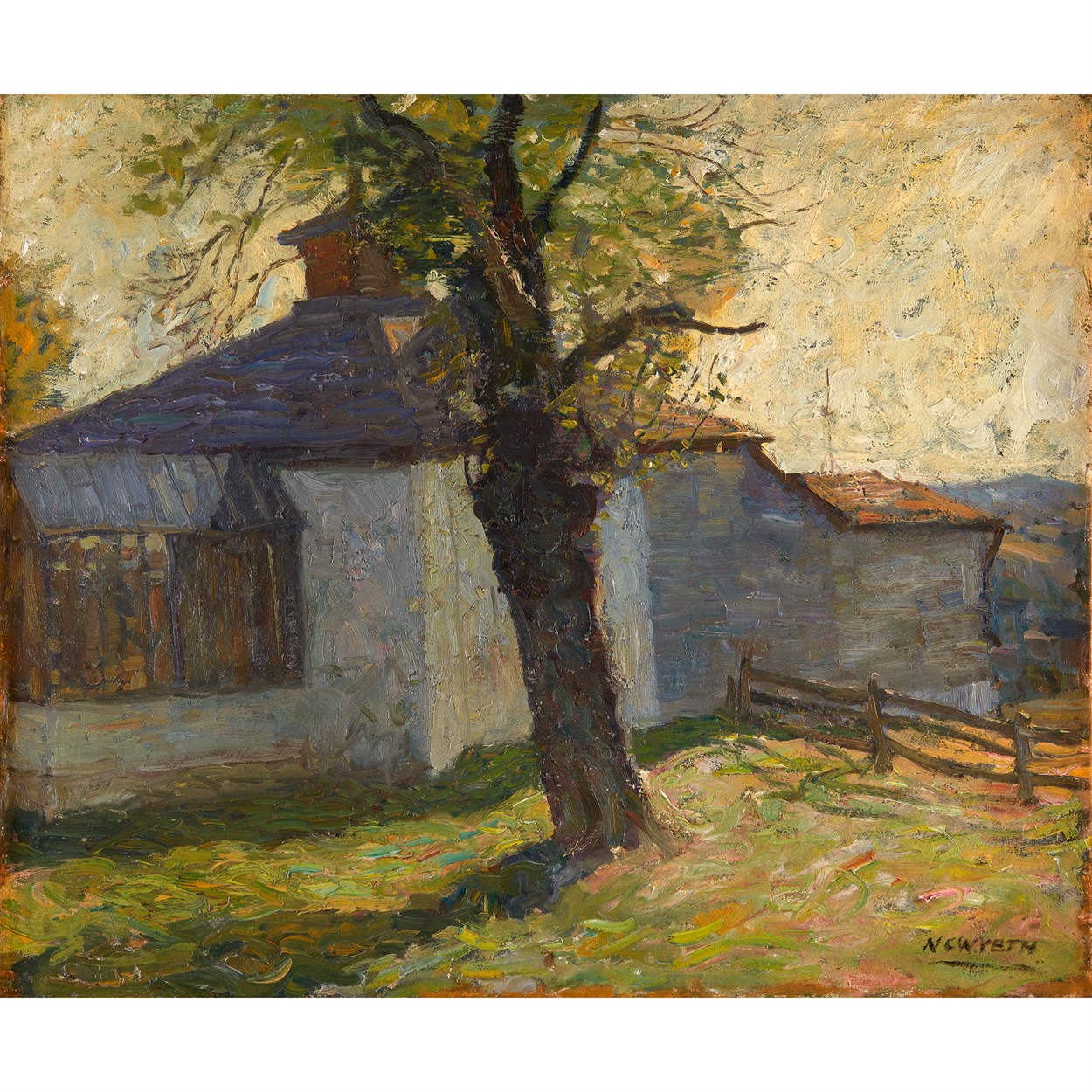 Signed 'NC WYETH' (underlined) bottom right; also inscribed 'N.C. WYETH STUDIO IN CHADDSFORD'WHERE HE PAINTED TREASURE IS.' on upper stretcher verso, and 'NEAR THE CHADDS FORD INN A FORMER BARN HE PUT IN STUDIO WINDOW CIRCA 1908' on bottom stretcher verso, oil on canvas
25 3/8 x 30 in. (64.5 x 76.2cm)
Executed circa 1908.

Signed 'NC WYETH' (underlined) bottom right; also inscribed 'N.C. WYETH STUDIO IN CHADDSFORD'WHERE HE PAINTED TREASURE IS.' on upper stretcher verso, and 'NEAR THE CHADDS FORD INN A FORMER BARN HE PUT IN STUDIO WINDOW CIRCA 1908' on bottom stretcher verso, oil on canvas
25 3/8 x 30 in. (64.5 x 76.2cm)
Executed circa 1908.

Note
Before devoting his career to Illustration art, and even during his earliest days as an illustrator, Newell Convers Wyeth had expressed a strong desire to become a landscape painter. In Delaware, his teacher Howard Pyle (1853-1911) encouraged him to explore this vein and devote part of his time to paint the surroundings. However, it is only when he and his wife Carolyn decided to permanently move from Wilmington to Chadds Ford in 1908, that N.C. Wyeth began seriously studying and painting the countryside. There, the artist freely rekindled his love for the beautiful and serene Brandywine River Valley; every recorded wooded hillside, stream, meadow, barn and farmhouse thus revealing a certain likening for landscape and rural themes in his independent, non-commissioned work. At the time indeed, the artist sought academy recognition (without much success) and ultimately blamed his commercial successes for preventing him from experiencing a more prestigious art career. In that regard, the landscapes Wyeth produced prior to 1910 reveal a taste for independence and recognition.
The present painting was executed in 1908, the same year the artist moved to Chadds Ford. The property which the Wyeth family rented just east of the village had two barns, one of which is depicted here, and which the artist converted as a studio. Soon the artist decided to do some renovation work on it: "the little barn (…) is now a carriage house - square and about 28' by 22'. So you see there will be little for me to do but to sink in a skylight, and besides it's a four-slope roof to a cupola and one roof is exactly north. The walls are 2-foot through and of stone." The studio was finalized in September 1908. Bursting with pride, the artist wrote: "My studio is completed for winter (except for a stove) and I consider it better in many respects to any one of the studios in town. The place is entirely sheathed on the inside, besides heavy papers underneath--a new floor over the old one and new heavy doors, that clamp practically air-tight, with windows in them. My working light is perfect, and it should be that my work hereafter improves to do justice to the surroundings." Years later, Wyeth would continue to improve and enlarge his studio, recording every new addition in a painting that would feature the not-so-little-barn either blanketed in the snow or sheltered by the leaves of the surrounding trees.