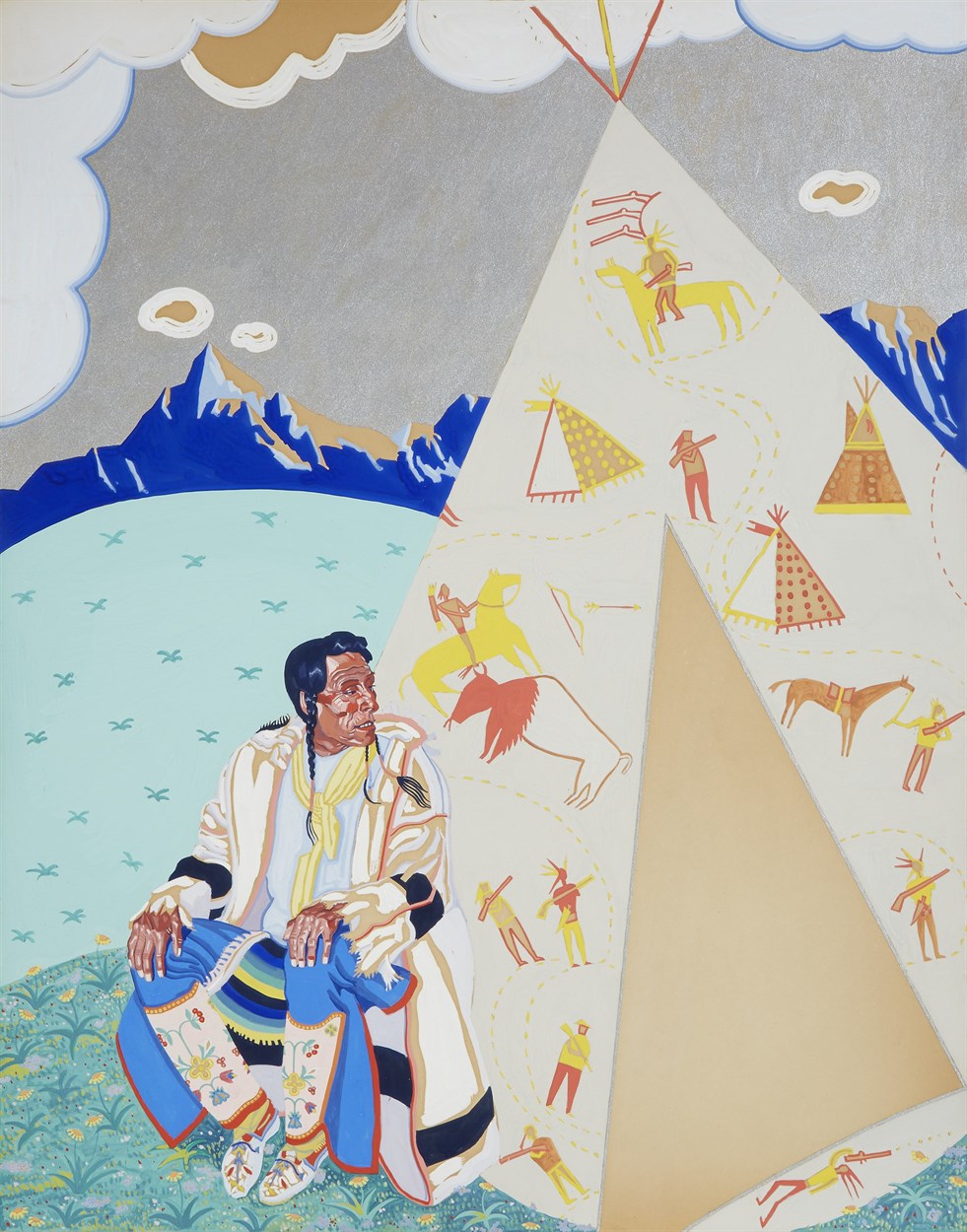 Each gouache on illustration board
(3)

The Artist.
Given by the above to Mr. Otto Baumgarten, New York, New York.
Acquired from the above by Mr. and Mrs. Oliver Rollinson.
By descent in the family.
Private Collection, North Carolina.

Each gouache on illustration board
(3)

The Artist.
Given by the above to Mr. Otto Baumgarten, New York, New York.
Acquired from the above by Mr. and Mrs. Oliver Rollinson.
By descent in the family.
Private Collection, North Carolina.

Winold Reiss was born in Karlsruhe, Germany and educated at the Royal Academy of Fine Art in Munich under Franz Stuck, as well as at the Kunstgewerbeschule under Julius Diez. In the early 20th century, much of Europe was quickly modernizing, and the dominant German artistic movement being taught was Jugendstil, or "youth style", considered the German equivalent of the French Art Nouveau. This style did not firmly delineate between fine art and design; it emphasized bold lines, bright colors, flat surfaces, and various design motifs integrated into works of fine art. Reiss adeptly melded this modernist sense of style and design into his skillfully rendered portraits of Native Americans, as seen in the present work. The artist possessed an affinity for Native American culture, particularly because of his close relationship with the members of the Blackfoot Reservation near Glacier National Park in Montana. Living alongside the Blackfoot from 1927-1928, he was given the Indian name of "Beaver Child" and honorably accepted into the tribe, an extremely rare accolade for a white man. According to Professor Jeffery C. Stewart, Reiss was intent on using his work to prove the monumental relevance and integral nature of the American Indian in American history as a whole, regardless of the rapidly industrializing and modernizing society. Unlike other artists of this time such as Seth Eastman and Charles Russell, who chose to depict Native Americans as a romantic vision of a past and disappearing nation, Reiss resisted this inclination and instead chose to insert his sitters into Jugendstil-inspired environs.
Reiss originally created these works as studies for a mosaic mural slated to be installed in the Chrysler Building in New York City, rendering this triptych in full color and fine detail. Similarly, his studies for other commissions, such as the mosaic which came to fruition and is in the Cincinnati Union Terminal, were executed as closely to the finished product as possible, so the client could actively visualize them as they would look when complete. Unfortunately, the stock market crash of 1929 caused the Chrysler commission to be cancelled due to financial constraints, and the mosaic was never completed. Nevertheless, each sitter is identifiable and each of them was depicted more than once by Reiss throughout his career. In 1927 Reiss painted another portrait of Chief Buffalo Hide, who is represented in the left panel. Only photographs remain of this portrait, which shows clear gridlines on the canvas, suggesting that Reiss intended to transfer the smaller image into a larger format for the mosaic mural. The two figures in the middle panel, Bob Riding Horse and Chief Shot Both Sides, are rendered in the present studies in exactly the same way as they are in two other oil paintings executed in Glacier National Park in 1928. These two paintings are illustrated in Jeffery Stewart's book Winold Reiss: An Illustrated Checklist of His Portraits (Washington D.C.: Smithsonian, 1990) on pages 84 and 87. Similarly, another version of the portrait of Mike Little Dog (also known as Emetagna, seen in the right-hand panel) is documented in photographs of an oil portrait that has remained unlocated. Interestingly, Reiss completed an actual mosaic of Mike Little Dog which exists in the collection of the Wolfsonian Foundation in Miami, Florida.
These works are of substantial historical significance, exhibiting Reiss's overlapping position as both fine artist and portraitist with his role as a modernist interior designer. Created during the late 1920s, they are the first located examples of Reiss's Native American portrait studies for commercial design projects. Other projects include murals in several restaurants in New York City, Chicago's Apollo Theatre and the South Sea Island Ballroom in Hotel Sherman (both 1921), the Woolaroc Museum in Oklahoma (1946) and the Santa Fe Railroad Ticket office in Kansas City, Missouri (1951).