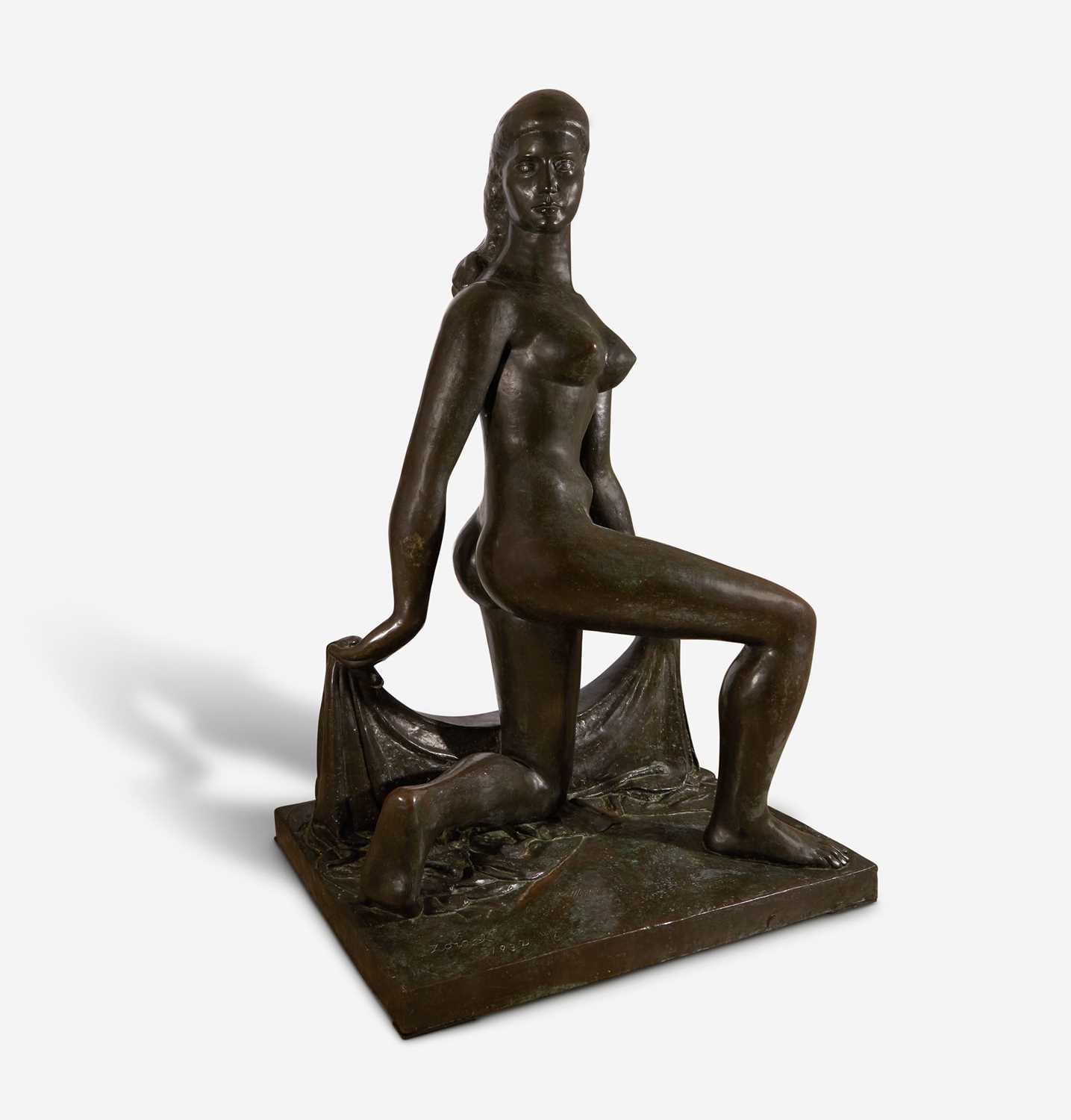 The Artist.
A gift from the above circa 1970.
Collection of an Educational Institution.
Sotheby's, New York, sale of November 28, 2007, lot 103.
Acquired directly from the above sale.
Private Collection, New Hope, Pennsylvania.

The Artist.
A gift from the above circa 1970.
Collection of an Educational Institution.
Sotheby's, New York, sale of November 28, 2007, lot 103.
Acquired directly from the above sale.
Private Collection, New Hope, Pennsylvania.

William Zorach's monumental Spirit of the Dance is one of the artist's most representative works. It is also one that bought the artist both fame and scandal altogether. Indeed, the sculpture was Zorach's submission for the lobby of the new Radio City Music Hall in New York City. Competing against Robert Laurent and Gwen Lux, Zorach eventually prevailed and his design was selected by the Rockefeller family. The first model was completed in 1932, and cast in the then ultra-modern medium of aluminum. Considerable controversy developed over the nudity of the figure when the sculpture was first exhibited, and for some months the dancer in fact disappeared from public view. When the artist exhibited a plaster model sometime later at the Downtown Gallery however, it was so well received by art critics and the general public that the aluminum sculpture was returned to Radio City Music Hall, where it can still be seen today.

The present sculpture is part of a later, authorized edition of six bronzes. Five other full-cast models of it exist, including one formerly in the pine grove near the artist's studio in Robinhood, Maine (now at the Portland Museum of Art, Maine). Numbered ‘4’ and 77 inches high, the sculpture depicts a dancer taking a bow before an audience. Her rounded, polished body is characteristic of Zorach’s work and recalls Mother and Child's clasical simplicity. The stylized, almost simplified volumes of the work also embody the Art Deco style of the 1920s-1930s. Of this sculpture, the artist said: “In this figure I have attempted to express the feeling of a young alive spirited woman goddess yet animal. There is always the feeling for movement and form voluminous rhythmic and dynamic which I try to express.” Here, the forms revolve slowly around a central axis, so the spectator must move slowly around the figure to perceive its full meaning. As Winger states, "The design untilizes the voids between the forms just as clearly as the solid masses of the forms themselves, thus creating a rich pattern of movement in space, and a figure of which each part is a clearly described form in itself, structural and necessary for the final unity of the figure and the expressiveness of the subject." He continues: "It is as logically and lucidly composed as a work of architecture, and yet in spite of its stately quality it has a strong spirit of spontaneity, and carries a full conviction of life in its form." Whether placed inside of Radio City Music Hall, displayed outside or in the safe interior of a collector's home, Spirit of the Dance shows the incredible technical ability of Zorach, who was able to combine his architectural vision and his sense of sensuality into one colossal, elegant design.