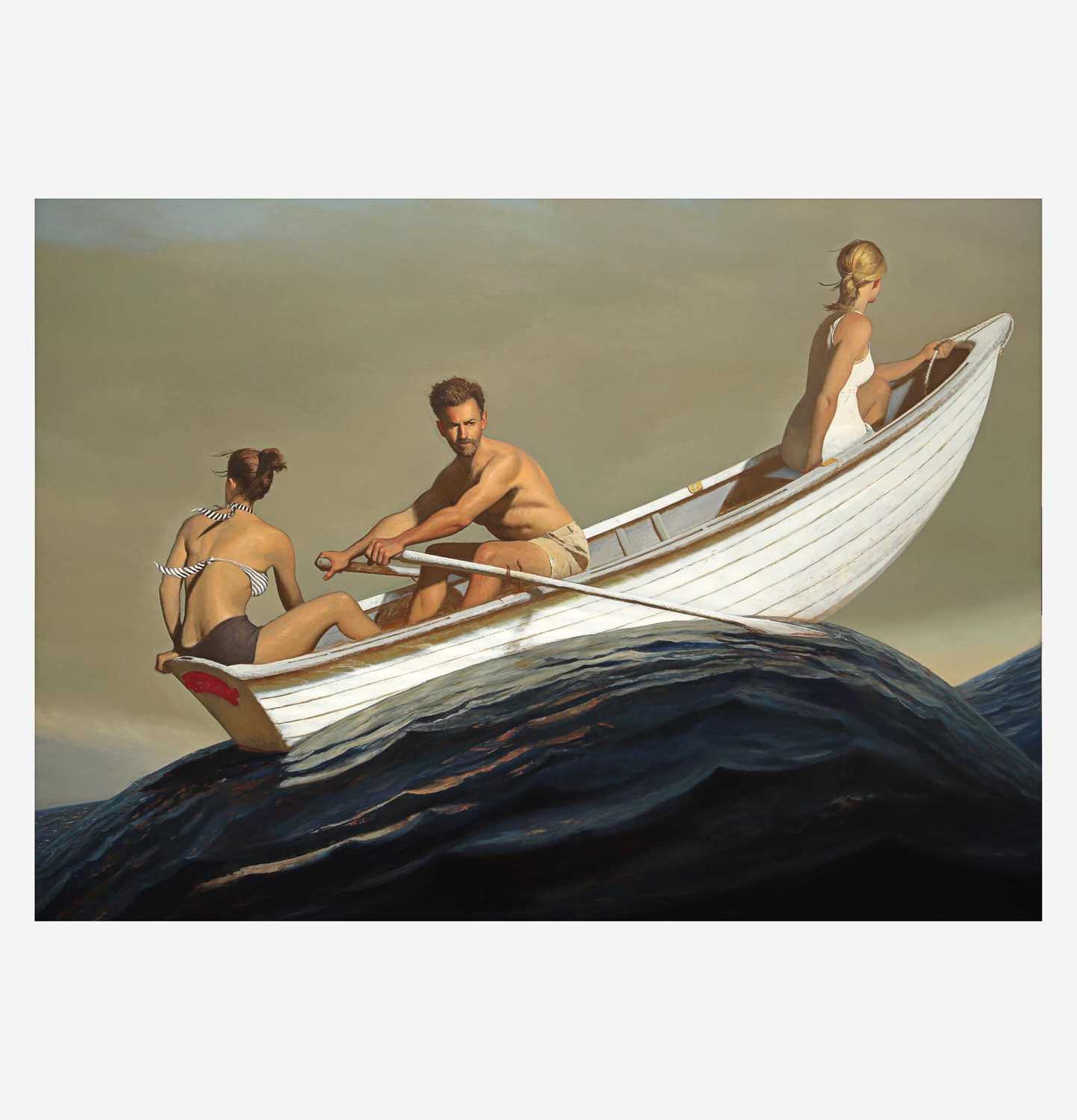 The Artist.
Acquired directly from the above.
Private Collection, Connecticut.

The Artist.
Acquired directly from the above.
Private Collection, Connecticut.

"A threesome rows a small skiff out over the open seas. They crest and sway awaiting the next trough. They are alert as they survey every direction." It is in those terms that contemporary American painter Bo Bartlett describes his painting The Promised Land, a very large canvas executed in the summer of 2015 which is now appearing on the open market for the first time. Instantly iconic, and arguably one of the artist's most accomplished works, The Promised Land fits within a longstanding series of works featuring one or several characters floating in a dory against an expanse of open sky. The intensity and palpable tension at work here remind the viewer of earlier works such as Lifeboat (1988, a study of which Freeman's sold in 2007), or the more recent The Cove (2022), thus proving Bartlett's ongoing fascination with boats, and their symbolism. In many ways, The Promised Land illustrates Bartlett's overall complex approach to reality and storytelling. While the work can appear realistic in execution, it is more than a simplistic snapshot of an event Bartlett may have witnessed. It possesses the delicate quality of a vision, a dream almost, filled with open-ended meanings. In that sense, the picture acts as an archetype, one heavily influenced by the art of Winslow Homer, who often depicted the many perils of the sea, and Andrew Wyeth (Bartlett's own mentor), who also liked to feature boats in his compositions, likening them to the long-established metaphor for mortality in American art. Death is indeed what might be on the horizon for our three characters, judging from the troubled look on the main man's face and as revealed by the often-mysterious alternate titles Bartlett had in mind while completing the work, such as "Thine is the Kingdom," or "They Will be Done." While completing this picture over a period of six weeks on his remote home on Wheaton Island, off the coast of Maine, Bartlett was hearing on the radio the poignant stories of countless Syrian refugees risking their lives in the Mediterranean Sea as they tried to reach Europe in hopes for a better future. In this light, the boat and the three figures become a metaphor for endurance, and hope. They row on surrealistically high seas, persevering against all odds, unaware of what the future holds. They might override the ominous wave the boat rocks on, and continue their journey, or they can be swallowed by the ocean and disappear. In the meantime, they have little choice but to push through, to move forward, to keep rowing. A masterfully rendered work with a luminous quality, The Promised Land challenges the viewer to consider their own actions and humankind's broader impact on the world. As Bo Bartlett himself stated: "Like the characters in the boat, may we remember the past, stay focused in the present, keep a watchful and hopeful eye toward the future (...) and may we keep on rowing."