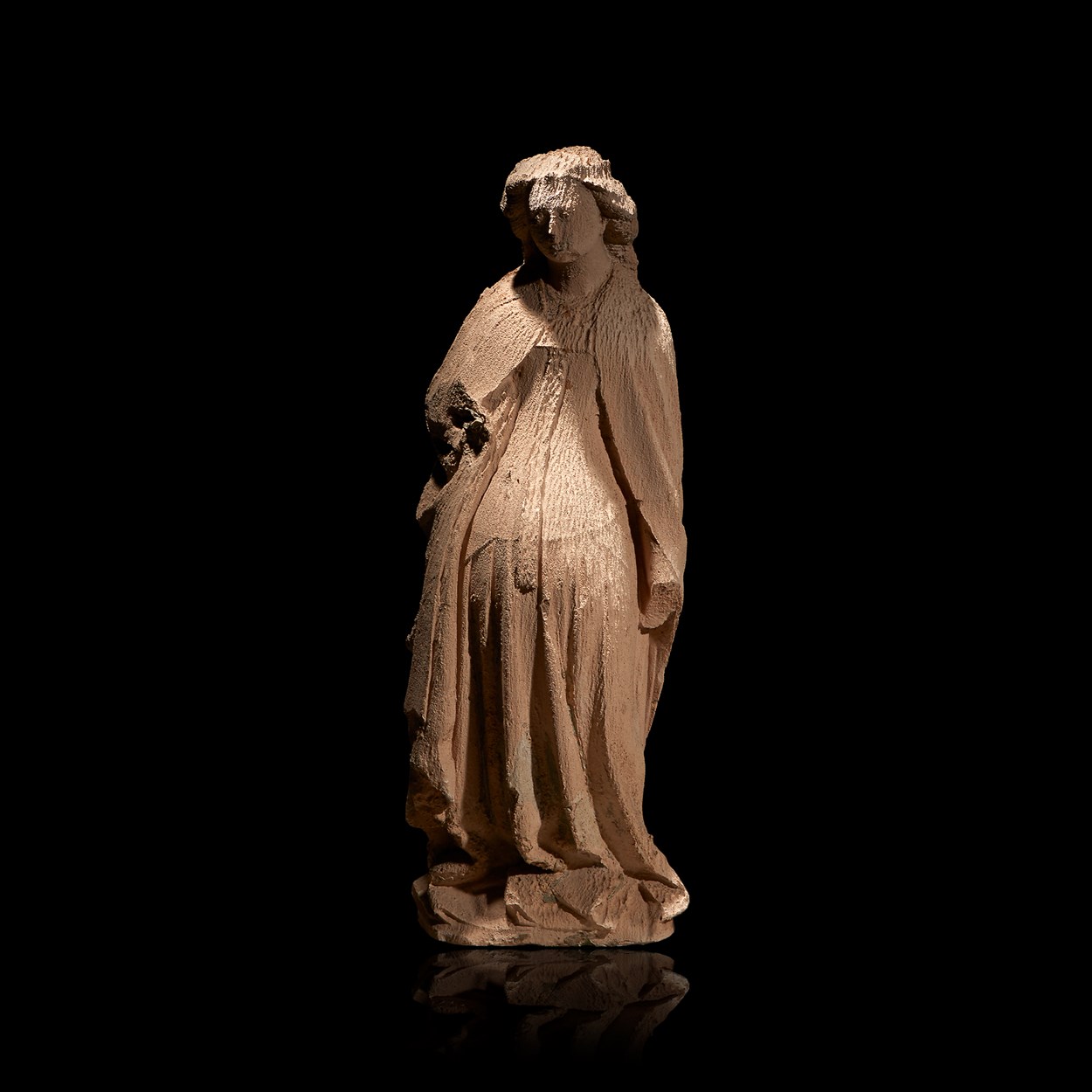 The identity of the saint depicted in the present lot was once believed to be the “Pregnant Virgin” – attributed, no doubt, to the low-slung protrusion of her bulging belly. This treatment of the female form, however, was considered the height of fashion for women of the Burgundian court under the duc Jean sans Peur (1371-1419, r. 1404-1419), where a narrow chest and long surcoat fastened with buttons, first seen in the 14th century, allowed garments to be fitted to the body in order to display to maximum effect a desirably fecund silhouette, often accentuated with gathered robes or stuffed pouches at the waist. This reading suggests that the figure, rather than pregnant, is represented as a stylish young lady of the elite ruling class.

Carved in the first quarter of the fourteenth century from the soft limestone produced in the northern regions of Burgundy, this material was prized for its malleability in executing high relief and flowing drapery not seen since antiquity. Borne of a single monolith, the outstretched right hand, now lost, would have been carved of the same material and attached with a metal tenon, still visible. Close inspection of her head, heavily corroded from the acid rains produced by centuries of steel production in the Burgundian region, still retains a wave of curled hair that would have been fitted with a crown. This evidence, and the lack of other integral carved saintly attributes such as a necklace or features at her base, suggests that her attributes would have been entirely applied, either out of carved wood or metal. Her right hand would have held the instrument of her martyrdom, while instruments of her torture would have lightly rested in her lowered left hand.

With undulating folds and cascading hair still retaining traces of original polychromy, the figure stands in contemplative repose, her head gently turned to receive the plaints of worshippers. Her conversational attitude, with body modeled in bold contrapposto with a voluminous leg visible beneath her robes in gesture toward a partner, it is likely the figure existed in dialogue with another. Her peaceful, solemn gaze with downturned eyes indicate she was designed to be viewed from below, such as in an architectural setting, and her mournful demeanour further suggests her use in a funerary monument. Virgin-martyrs of the early church were entitled to depiction with a crown, but only three had, by the early 15th century, been incorporated into the Fourteen Intercessors who might be deployed for this function: Barbara, Margaret of Antioch, and Catherine of Alexandria. Barbara, with her large tower and ciborium, and Margaret, who holds a small cross with both hands, would not have been carved with the gesture or aspect of the present work.

Catherine of Alexandria, a third-century Egyptian princess and the mystical bride of Christ, and John the Baptist, the prophet and cousin of Christ, were among the most revered saints in the medieval Christian canon, and shared a martyrdom by beheading. They were, therefore, frequently used together in funerary monuments as intercessors against death, such as can be seen in the funerary chapel of the Burgundian duc Philippe le Hardi (1342-1404, r. 1363-1404), father of Jean sans Peur, at Champmol, constructed in the late 14th century. We may surmise, therefore, that the figure may be Saint Catherine of Alexandria, now separated from her attributes. Her right hand would have held a sword while her left would have supported a small wooden wheel.

This lot is sold together with a copy of an analysis by Théo-Antoine Hermanès, which may also be reviewed upon request prior to the auction.