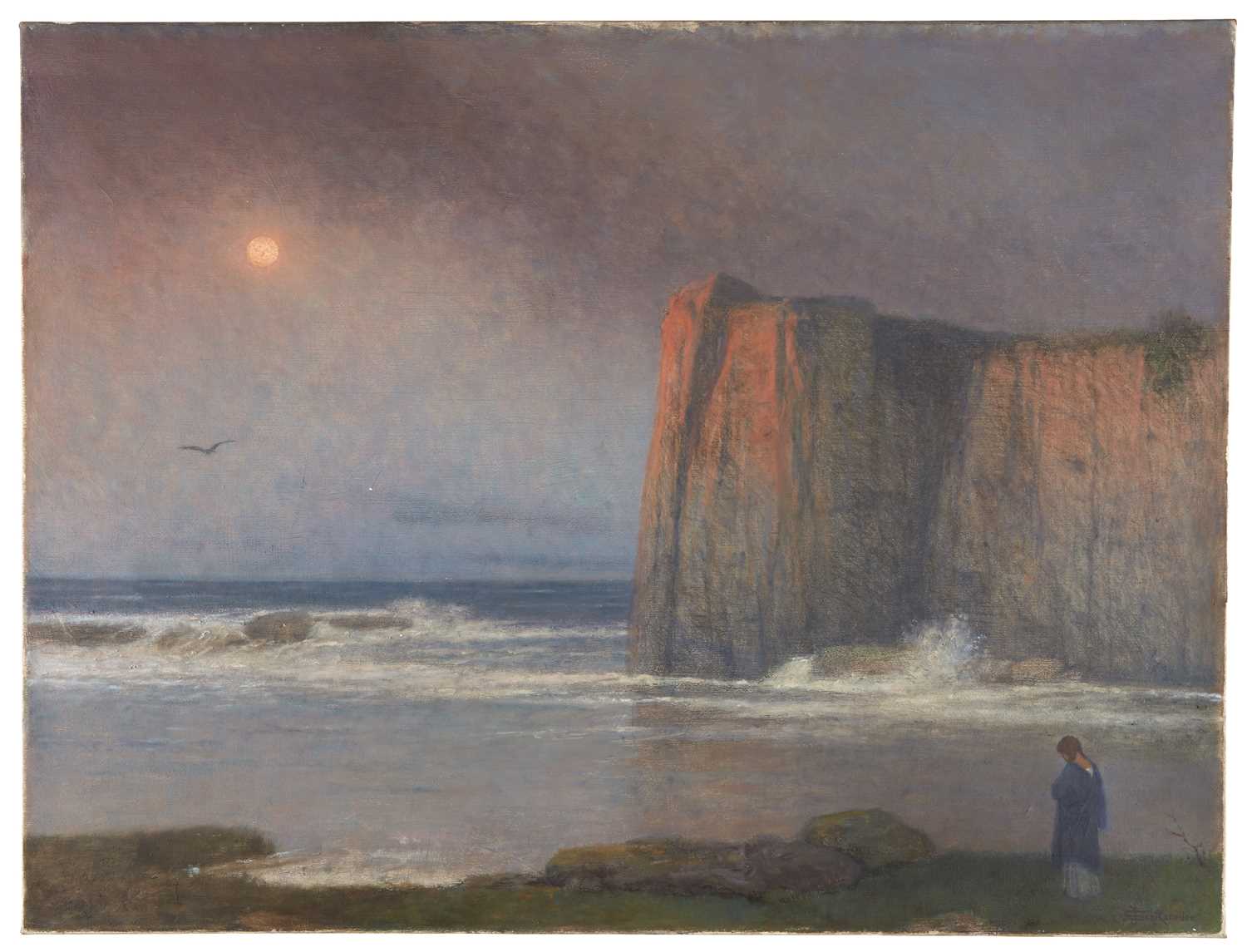 We wish to thank Mr. Tomáš Vlcek for confirming the authenticity of the present work, and Ms. Veronika Hulíková for her assistance in cataloguing it.

Despite a prolific career and a rather long life, little is known about Jakob Schikaneder. In his obituary dedicated to the artist in Zlatá Praha magazine, Viktor Šuman portrays a humble and quiet personality, writing: “There was never any ado about his name; he was one of those silent, undemanding artists who saw the meaning of life in hard quiet work. He was slim and handsome, with nice and gentle features, and his pensive and noble soul left a trace everywhere.” However, Schikaneder was a major figure of 19th century painting, mostly regarded for his nocturne street scenes of Prague, a theme and a city forever attached to his name.

Schikaneder grew up in a modest family, and studied at the Academy of Fine Arts in Prague, from which he graduated in 1878. The same year, he obtained a passport to travel in Europe, and explored Germany, France and England. During this trip, Schikaneder discovered the works of many artists who became references and life-long inspirations, such as Caspar David Friedrich, Josef Israels, Jean-François Millet as well as Leonardo da Vinci, whose sfumato he adopted. This exposure to European Art at large also fueled his ambition to become a well-known painter on the local and European art scenes. The artist in fact later participated in decorating the exhibitions of the School of Decorative Arts at the Exposition Universelle in Paris in 1900 and St. Louis, Missouri in 1904.

Following his early portraits and raw social-realist scenes, which include his chef d’oeuvre Murder in the House, Schikaneder turned to larger landscapes marked by a certain poetry, if not spirituality. Such is the case of The Calm Sea - Nocturne, a mature work completed later in the artist's career, as revealed by the powdery touch inspired by the charcoals and pastels he produced in large quantities after 1900. The work features a lonely female figure on the edge of a cliff, contemplating the immense sea. It is permeated by Schikaneder’s characteristic foggy veil, and channels much of Friedrich’s romantic views. As the German painter before him, rather than presenting his viewer with a realistic scene, Schikaneder prefers to insist on the feeling of the moment – the contemplative mood of the present figure occupied by her own emotions and inner thoughts – a quintessential characteristic of the artist’s oeuvre, who preferred to work from memory in the studio rather than en plein air.

At the time the painting was executed, Schikaneder had retired from his 37-year tenure at the School of Decorative Arts in Prague. During his time off, the artist and his wife, Emilie Nevolová, travelled throughout Europe, especially along the North Sea. According to his biographer, Josef Thomayer, Schikaneder was fascinated by the ocean, and did not miss a chance to sail when he could. The present painting seems to represent the dramatic coast of Heligoland, a small island 60 km (35 miles) off the coast of Germany, which attracted many artists in the 19th century and was made famous by Franz Kafka. Schikaneder produced several large-size landscapes of Heligoland between 1922-1924. While they do not all depict the same subject (some focus on the cliffs, others give a view of the pier and the lighthouse), the landscapes unequivocally capture the rawness of the island and focus on the dramatic line that divides sea and land: “savage nature and civilization” as Veronika Hulíková explains in her the catalogue of her restrospective exhibition dedicated to the artist in 2012. Specifically, The Calm Sea - Nocturne seems to feature the famous red sandstone rock called “The Long Anna,” which he also depicted in Heligoland. Here, it frames the composition elegantly and offers a dramatic backdrop for the sea, which is the real subject of the painting. Its wide, flat expanse occupies most of the canvas, and certainly the figure’s thoughts, as she is struck by Nature’s spectacle. The sea conveys a sense of lyricism to the work which seems to be on par with Claude Debussy’s contemporary La Mer symphony, which Schikaneder was familiar with, growing up in an artistic milieu among the music and song of his grandfather, aunts, cousins and older brother Kare. Both works perfectly translate the transient atmospheric effects of light onto the shimmering sea; they also encapsulate the aspirations, doubts, fears and dreams of the entire generation of romantic-inspired artists, such as Schikaneder.

At the time the present work was completed, the artist had withdrawn from the public sphere in the last decade of his life, and never publicly exhibited any of his paintings of the sea coast. He died suddenly on November 15, 1924 at the age of 69 in his apartment in Prague’s Vinohrady quarter, reportedly while playing Rachmaninoff’s Prelude on his piano.