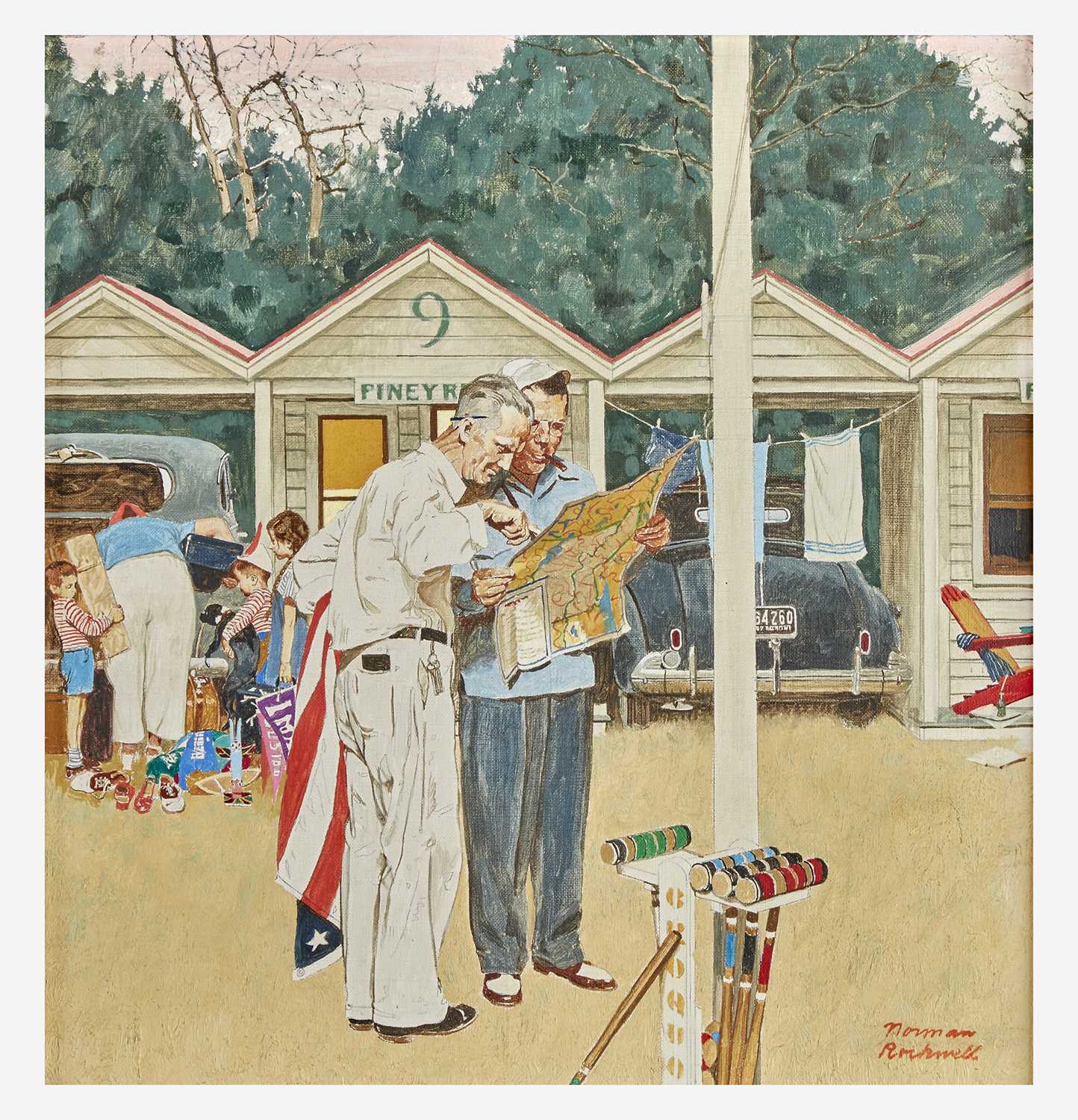 Norman Rockwell, “Making the Color Sketch” in Rockwell on Rockwell: How I Make a Picture, Watson-Guptil Publications, New York, 1970, p. 165 (for an illustration of the entire series).

Norman Rockwell is perhaps best remembered for his historic involvement with The Saturday Evening Post, a famous Philadelphia-based magazine, for which he painted an impressive 321 cover illustrations. Aside from this, Rockwell also illustrated calendars, and was commissioned to paint a significant number of advertisements for major American companies including Coca-Cola, Jell-O, Sun-Maid Raisins, and Western Union.

Painted in the 1950s and directly gifted by Rockwell to the family of the present owner, Piny Rest Motel was probably intended for a Saturday Evening Post cover. Ultimately however, it was used as an advertisement for a Famous Artists School's promotional poster. Created by Albert Dorne at the onset of World War II in 1948, the Famous Artists School (FAS) was once the leading business in the city of Wesport, Connecticut. At the time, self-improvement courses completed at home became increasingly popular, and the school aimed at providing a series of specific art courses by correspondance to aspiring commercial artists across the United States who wished to convert their technical skills into careers. Dorne capitalized on Rockwell's fame ("The World's Most Famous Cover Artist") and hired him as an instructor. Over the years, Rockwell designed nationwide campaign posters in order to promote the school, and recruit new students. The School rapidly became successful, but needed to be remodeled after it became evident that students were only interested in taking Rockwell's course, and neglected the other founders' curriculum.

The present work appears to be a pivotal version of an intensely researched subject, which Rockwell explored and diversified via numerous color sketches before eventually settling on "the correct solution." The scene take places in the early hours of the morning at a motel, Cozy Rest or Piney Rest according to the many versions, and shows a family about to depart. While the mother and children are shown packing the car in the background, the patriarch is asking for directions from the manager of the complex in the foreground. The work follows several small color sketches that established the general color scheme, the tonal relationship, as well as the composition of the scene. It also predates the last studies Rockwell did, which focus on the two main characters in the foreground. Here, Rockwell dots the scene with important details and props that convey the atmosphere of a tourist camp, such as the croquet mallets in the foreground, or the colorful flags the father holds in his hand - an uncanny and heartwarming depiction of the quintessential, simple American family dream that Rockwell sought to capture throughout his long career, and on which the model of the Famous Artists School was built. As the artist stated himself: "I was showing the America I knew and observed to others who might not have noticed. And perhaps, therefore, this is one function of the illustrator. He can show what has become so familiar that it is no longer noticed. The illustrator thus becomes a chronicler of his time."