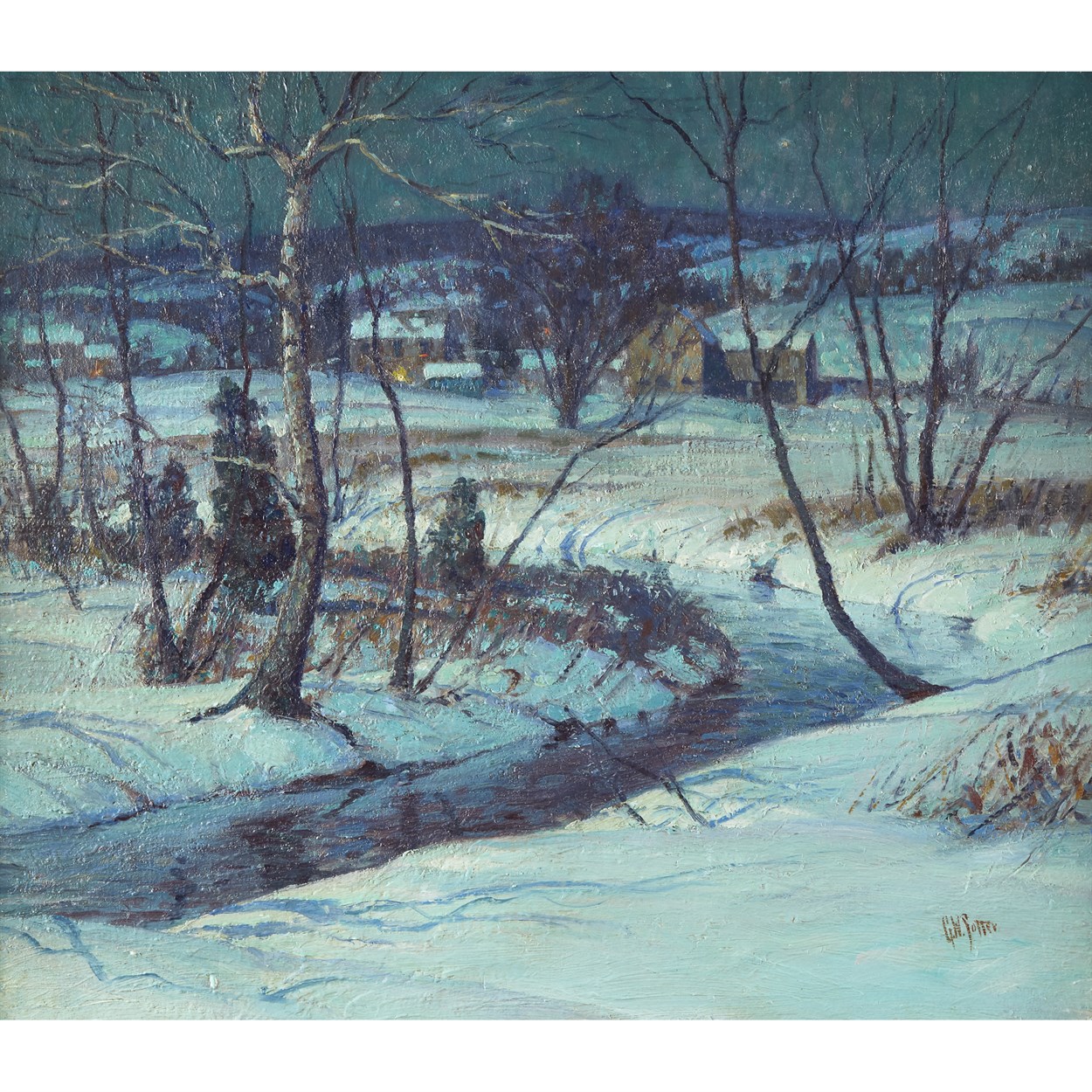 Acquired directly from the above.

Acquired directly from the above.

Although he started his career as an active stained glass artist in Pittsburgh, George Sotter is best known for his poetic winter nocturne scenes, in which he usually featured quaint hamlets or solitary houses blanketed in the snow, nearby a river or a forest, and bathed in a soothing moonlight. Few American artists painted night subjects as regularly as Sotter, who is said to have produced hundreds of works of that type. Contrary to James Abbott McNeill Whistler's (1834-1903) nocturnes which were fundamentally loose and obscured abstract landscapes, Sotter's "moonlight paintings" aimed at a certain clarity and showed a sense of detail. In a way, they remained attached to a certain tradition, the artist continuing to base his approach on first-hand observation and plein-air painting. Such works generated incredible interest among the artist's collectors and critics, who cherished them for their romantic touch and deeper significance.
The present work, along with the following Lot, were executed at the peak of Sotter's painting career; respectively in the twenties and the thirties. Likely painted from nature, they are set nearby the artist's own home and studio in Holicong, PA, amidst the "tranquil tenor, beautiful stone houses and rolling hills of Bucks County" - to which Sotter was first introduced in 1902 by fellow Pennsylvania Impressionist Edward Redfield (1869-1965), who took the artist under his wing and invited him to become his student at his home in Centre Bridge.
With its thick impasto and quick impressionistic touch, Moonlit Stream reveals the great influence of Edward Redfield's painting on Sotter's early work. Contrary to the master who always aimed at capturing the ever-changing light, Sotter here focuses on the pearlescent atmospheric tones of the night scene, which becomes imbued with a sense of stillness, and even nostalgia. With Carversville House (lot 42) however, executed a decade afterwards, Sotter gives way to a richer palette and a more polished, blended approach to paint application - using deeper blues and adding purples to evoke an even darker, quieter winter night. Through his accomplished technique and without any theatrical effects, Sotter makes the landscape palpable and demonstrates the romanticism and the poetic force of a simple winter night subject.