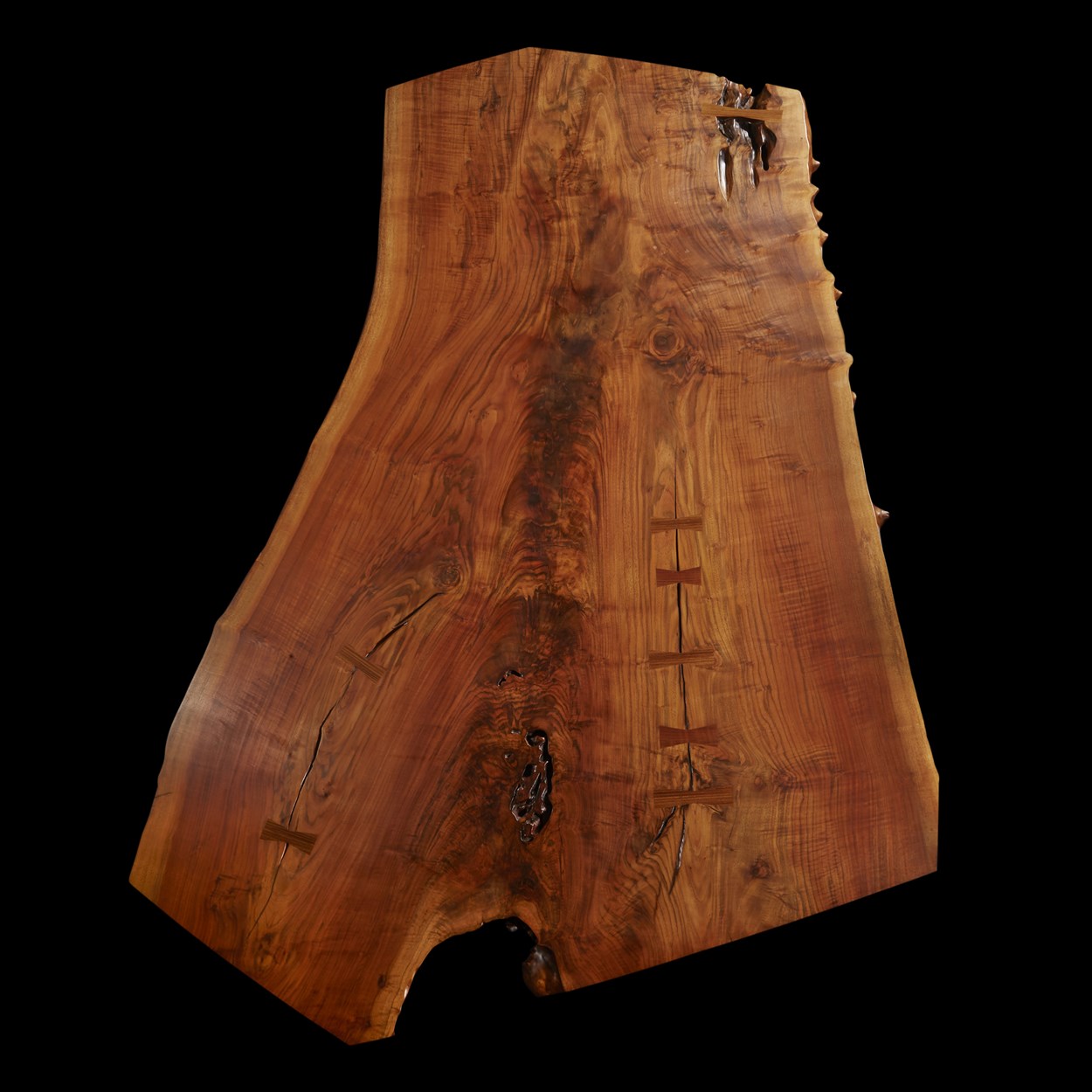 This extraordinarily large and impressive Holtz table has a single board Claro walnut top with eight butterflies in American black walnut and laurel and the exposed cross-section of a lead bullet revealed during the sawing of the lumber. The Claro walnut slab was selected by the client with George Nakashima, who made special mention of the bullet that had been shot into the tree during it's life and revealed in the cutting. Production of this magnificent table took 3 years, as George died shortly after the client's visit and Mira undertook its construction and design.

This lot is accompanied by the original working drawing for the table (the design later altered) by Mira Nakashima and photocopies of the original invoices from George Nakashima Woodworker.

Pati Doyle-Weber and Dr. Steven J. Weber were early patrons of Mira Nakashima's following the death of Mira's father, George Nakashima, in 1990. The Doyle-Webers had dreamed of commissioning work from the famed Nakashima studio and in the late 1980s met George and Mira at their New Hope, Pennsylvania studio, where they toured the showroom and drying barn. Following George's death in 1990, Mira, who had then for several years been working as George's apprentice in the most literal sense, was faced with her father's larger-than-life legacy and the question of what would happen next. For decades prior, George Nakashima and his studio had earned huge notoriety for their immeasurable influence on the history of 20th century furniture design, generations of woodworkers, and an iconic aesthetic. Pati and Steven recognized early on that Mira was working with a distinct magic, unique from her father's, but in comparable abundance. With Mira's guiding hand and friendship they went about amassing a trove of furniture for a custom contemporary home they were building in the Philadelphia suburbs. The home would have to wait, however, for a Nakashima masterwork. Pati envisioned a large Nakashima dining table taking center stage in her new home. It was with this that Pati and Steven requested from George and Mira a table of highly-figured wood and unusually massive proportions, the dimensions of the table around which her home would then be built. For the commission, George Nakashima and Dr. Weber selected a prized slab of Claro walnut from the Western United States with a dramatic crotch grain. In order to support the slab's size (cut to over nine feet by six feet), the studio utilized the "Altar"-type base George Nakashima had used years earlier in 1986 for the first of his "Peace Altars," the spiritual culmination and design apotheosis of his lifelong work. These Altars, George envisioned, would each be gifted to a continent of the globe and serve as "shrines" to peace and communal understanding. Designed specifically to accommodate a large gathering and celebrate a truly remarkable tree, the table selected by George and designed by Mira Nakashima for the Doyle-Webers shares both a design and spiritual kinship with these Altars for Peace. Perhaps unsurprisingly, the Conoid chairs selected for the table would themselves be superlative, with seats carved from a single board of exceptionally-figured walnut. To furnish the rest of their new home, Pati and Steven ordered benches, coffee tables, lounge chairs, side tables, and other choice commissions from Mira through the 1990s. The Collection of Dr. Steven J. Weber & Pati Doyle-Weber is among the nicest assemblages of Mira Nakashima's early work.