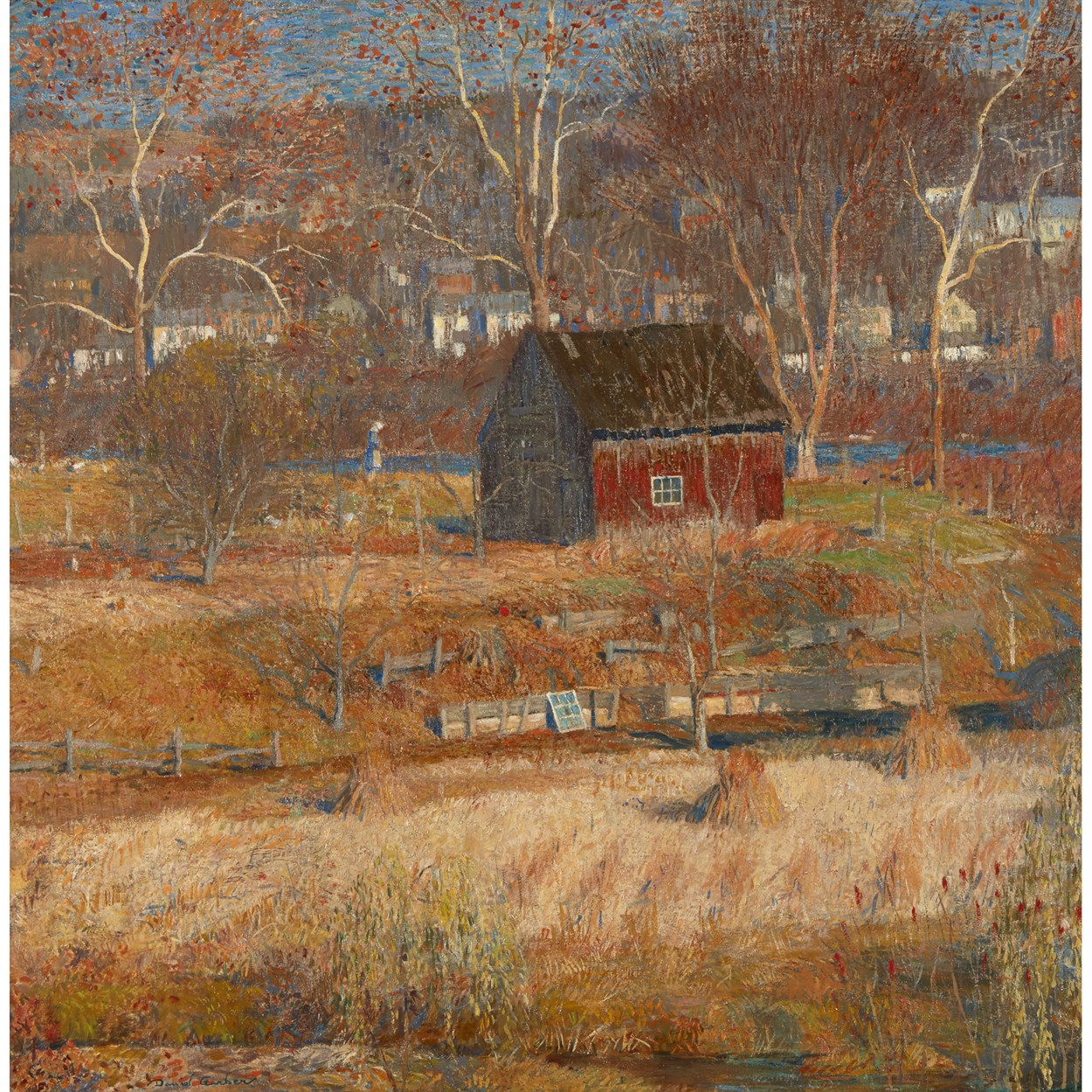 Acquired directly from the above in 1928 (while on exhibition at the Corcoran Gallery).

The Artist (returned by the above in exchange for The Sycamore in 1929).

Acquired directly from the above in 1953.

Acquired directly from the above in 1928 (while on exhibition at the Corcoran Gallery).

The Artist (returned by the above in exchange for The Sycamore in 1929).

Acquired directly from the above in 1953.

Letter from Robert W. Macbeth from Macbeth Gallery to Daniel Garber, May 11, 1925.

Letter from C. Powell Minnigerode of the Corcoran Gallery to Daniel Garber, October 26, 1928.

Letter from C. Powell Minnigerode of the Corcoran Gallery to Daniel Garber, January 17, 1929.

The 1920s marked a period of "relaxed maturity" for Daniel Garber, who gradually moved away from his large decorative compositions to focus on smaller works, which further proved the artist was fully in command of his medium and ultimately granted him a wider audience of collectors. As he confessed to a close friend around that time, Garber became increasingly "interested in the less obvious, in the more subjective and subtle side of things." The works he produced in the 1920s thus present the viewer with a more personal and subjective vision of his beloved Bucks County, where he and his family had moved in 1907.
Rodger's Meadow fits into this category. Set in the close vicinity of Garber's cottage in Cuttalossa, the work features a lonely red barn in an extensive fall landscape. Set on top of a small hill, the building is completely surrounded by nature, which Garber captures in a palette of rich and brilliant autumn hues. In the foreground runs a calm brook, stretching horizontally along the bottom outer edge of the canvas, echoing the elongated blue skyline in the background, above the treetops. Throughout the orange foliage, one can spot the faraway village of Stockton nestled in the quiet hills. The scene conveys a sense of tranquility, serenity and almost desertion. The only human presence is indicated by a distant farm girl who is shown feeding her chickens, and by the delicately arranged haystacks in the foreground, among which lays a mysterious window pane.
With its very precise title that refers to a specific locale that only Garber and local inhabitants would have known, Rodger's Meadow pays tribute to the artist's new intimate lifestyle in the countryside, far away from the bustling industrial town. While the artist used to explore Pennsylvania at large earlier in his career, during the 1920s Garber increasingly began to paint local subjects, immersing himself in the daily life of his neighbors. As such, houses, mills and barns, including the one at present, started to populate the artist's repertoire. By incorporating these things, Garber not only aimed to present a simple way of living or a common landscape, but he also wanted to celebrate the ordinary men and women he befriended, those constantly plowing, planting and storing the crops around them.
Rodger's Meadow was among the twenty or so paintings Garber presented in his second solo exhibition at Macbeth Gallery in New York in 1925. The work was particularly appreciated by critics and reviewers who saw it as evidence for a new direction in the artist's career, one in which the message behind the work equaled the artist's technical mastery, if not surpassed it. The canvas was also celebrated for its ability to convey a warm and sincere atmosphere of human living, making it an "intimate interpretation of homespun episodes in American landscape."