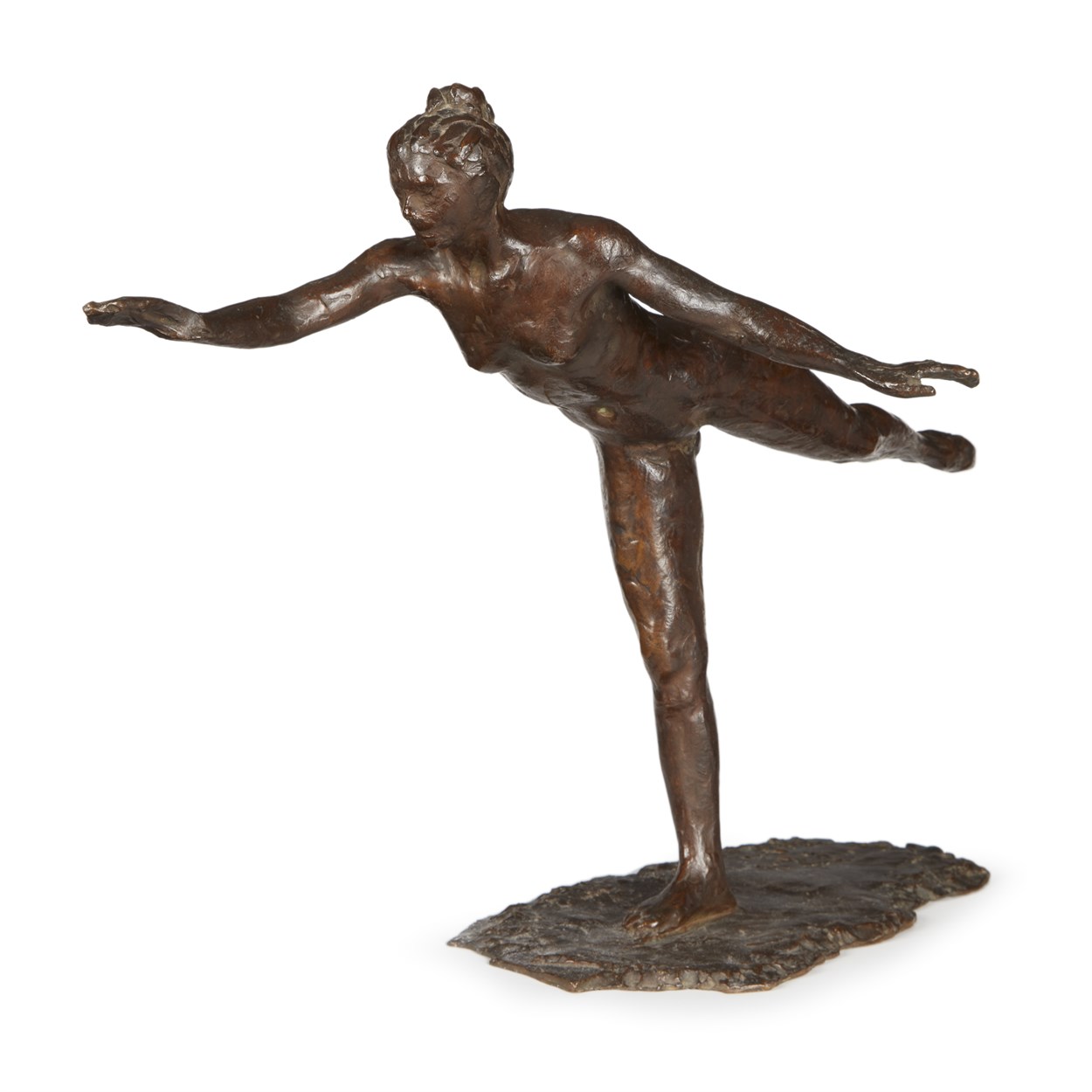 Alex Maguy, Galerie de l'Élysée, Paris.
Acquired directly from the above in 1966.
Collection of Mr. and Mrs. Paul & Sophie Sampliner.
Their daughter, Mrs. Avrum Ben-Avi.
By descent in the family to the present consignor.

Alex Maguy, Galerie de l'Élysée, Paris.
Acquired directly from the above in 1966.
Collection of Mr. and Mrs. Paul & Sophie Sampliner.
Their daughter, Mrs. Avrum Ben-Avi.
By descent in the family to the present consignor.

Although Edgar Degas is credited with the creation of hundreds of sculptures throughout his career, very little is known about the scope and chronology of his sculptural œuvre. In his lifetime, the artist only exhibited one sculpture in public, La Petite Danseuse de Quatorze Ans, which was on view for less than a month at the sixth Impressionist Exhibition in 1881, thereafter kept hidden in Degas' private apartment until his death in 1917. Yet numerous friends such as Julie Manet and Walter Sickert recalled seeing several wax models scattered around the artist's studio. Even his dealer, Joseph Durand-Ruel wrote in 1919: "As far as I can remember-that is to say, perhaps forty years-whenever I called on Degas I was almost as sure to find him modelling in clay as painting." (Letter from Joseph Durand-Ruel to Royal Cortissoz, dated June 7, 1919. Beinecke Rare Book and Manuscript Collection, Yale University).

To this day, Degas' motivations for producing such a body of work still remain unclear. While some scholars have analyzed his statuettes as a late, desperate attempt to show creativity and improvisation at a time when he was becoming blind, others see them as mere exercises in form, a substitute for the living models Degas used in his pastel and oils of similar subject matter. Either way, the fact that so many of his sculptures remained unknown for so many years suggests a private project, which the artist intended to keep for himself. To all who knew him personally, Degas was admittedly reluctant to have his sculptures publicly displayed, and equally disinclined to have them cast in bronze: "It's a tremendous responsibility to leave anything behind in bronze" he confessed in a letter to his friend Ambroise Vollard- "This medium is for eternity." (quoted in Ambroise Vollard, Degas, Paris, 1924, p. 112 [in French]).

Efforts to trace a chronology of all of Degas' known sculptures is therefore a hazardous task, especially since Degas was notoriously reluctant to ever consider his sculptures finished and continuously reworked them. Paul André Lemoisne, an early biographer of Degas, suggests that the artist started modelling from his very beginnings, ultimately embracing sculpture as his principal, if not his unique, artistic activity during his late years, as his eyesight started to decrease. When Durand-Ruel made an inventory of Degas' studio after his death, one hundred fifty wax sculptures were found "scattered over his three floors in every possible place." According to the dealer, many of them were in dreadful condition ("Degas must have made an enormous number of clay or wax figures but as he never took care of them-he never put them in bronze-they always fell to pieces after a few years, and for that reason it is only the later ones that now exist." (Letter from Joseph Durand-Ruel to Royal Cortissoz, dated June 7, 191, quoted in Daniel Rosenfeld, European Painting and Sculpture, ca. 1770-1937, in the Museum of Art, Rhode Island School of Design, Philadelphia, 1992, p. 107). Luckily, seventy-three figures could be salvaged, and were later cast into bronze by Albino Palazzolo, then director of the Hébrard Foundry. The contract authorizing the castings stipulated that Hébrard would make twenty-two casts of each of the works: one complete set for Degas' heirs, one for the foundry, and twenty remaining sets, each numbered from 'A' to 'T' and all meant to be sold worldwide. While casting the bronzes, Palazzolo employed an unconventional technique that he learned in Milan and that allowed for the creation of a master bronze for each casting (a "modèle") as well as for the preservation of the original, fragile wax models.

Of all the themes Degas explored and rendered in his sculpted works, dance seems to have been the most inspiring subject to him: out of the seventy-four sculptures that he modeled in wax, forty were dancers. Specifically, the artist developed an ongoing appreciation for the arabesque, modelling eight statuettes of dancers in different stages of this iconic and challenging ballet pose. Historically, John Rewald placed Degas' bronze dancers in the period 1882-1895. Scholars later narrowed these years, suggesting a date of 1885-1890 instead, based on Walter Sickert's own recollection of Degas showing him the original wax of Grande Arabesque, Deuxième Temps in his studio in the early 1890s.

In the present work, the dancer is shown with her left leg extended backwards, almost parallel to the ground, and her right arm reaching forward, counterbalancing her weight. Her head turned to the right, she gazes over her arm at an invisible audience, sending them a smile-"a rarity in Degas' sculpture." (Susan Glover Lindsay, Edgar Degas Sculpture, an exhibition catalogue, Washington D.C., 2010, p. 196). The three-dimensional medium here offered Degas the opportunity to expand his previous exploration of the human body in motion, and to fully capture the acrobatic pose of the dancer, whose effortless flexibility echoes her graceful posture. As Alison Luchs points out, "Of all the movements of classical ballet, the arabesque seems to have held the greatest fascination for Degas as a sculptor (...) The arabesque is a moment of balance in which the dancer reaches a peak of tension between submitting to gravity and escaping from it. Her body has one point of contact with the earth and endless directional possibilities for the other limbs that seem to strain for freedom (...) The difficulty for a model to maintain the relevant poses must also have stimulated [Degas] to explore the arabesque in sculpture. The resulting waxes provided a three-dimensional aid for studying this human movement for the treatments that appear repeatedly in Degas' paintings and pastels from the 1870s through the 1890s." ("The Degas Waxes," in Art for the Nation: Gifts in Honor of the 50th Anniversary of the National Gallery of Art, Washington, D.C., 1991, p. 196).

The arabesque was introduced into romantic ballet performance during the second half of the 19th century, thus heralding a new aesthetic revolving around horizontal and oblique positions, as opposed to a more traditional verticality that marked the scenic space for decades. One of the most animated poses of ballet, the arabesque was frequently depicted in Degas' paintings, drawings and pastels. The motif was increasingly revisited in the 1900's, when Degas most likely used the wax model for the present sculpture as a model for a series of works on paper which captured several viewpoints of an arabesque. These include Three Dancers (Oxford, Ashmolean Museum, Parker I, 573) and Deux Danseuses en Maillot (Private Collection), where the artist seems to have rotated the wax model in order to present two slightly different views that suggest the rhythmic sway of an ensemble.

The present sculpture depicts a transitional phase of the arabesque; it is the second in a series of three related versions of the same subject, all showing the dancer in the various sequences of her acrobatic move. Thought to be the most expressive of all of the arabesque-themed bronzes, it follows Grande Arabesque, Premier Temps, featuring the dancer at her preliminary upright pose, and precedes Grande Arabesque, Troisième Temps, a precarious pose in which the dancer is raising her left leg to an oblique angle up in the air, and bowing her chest towards the ground. Daphne Barbour has observed that "As a group, the arabesques can be compared to Eadweard Muybridge's stop-action photography with which Degas was clearly familiar and may have served as inspiration for other sculptures" (Degas in the Norton Simon Museum, an exhibition catalogue, New Haven, 2009, p. 354).

Despite its title, Grande Arabesque, Deuxième Temps does not technically represent an arabesque as ballet masters or dance specialists would have described it back in Degas' time. According to dance specialist Susan Glover Lindsay, "The dancer's raised gesture leg in Degas' wax falls somewhere between the lower demi-position and the grand position (horizontal or higher)." (in op. cit., 2010, p. 207). In fact, Degas' ambition was not to faithfully capture the movement in a naturalistic way, but instead to concentrate more on its dramatic quality, and to convey the overall silhouette of the dancer. This bold approach reflects a new sensibility in the artist's late work, in which movement and form become a vehicle to convey the dancer's effort and risk, and therefore commands its faithful transcription in a three-dimensional object. As John Rewald explains, "The care for detail has disappeared; both hand and eye go after what is essential with the raw strength which comes from knowledge and experience. The movements to which he had devoted such research he now represents in a style which is itself teeming with agitation. In his hands, wax is no longer an inert material; his fingers mold it almost frenzied, constructing masses which no longer borrow from nature the smooth surface of human bodies, but express, right down to their rough texture, the pulsations of life and the breath of the creator" (Degas' Complete Sculpture, San Francisco, 1990, pp. 23 and 24). In this case, Degas was also certainly drawn to the delicate sense of balance and precariousness that the arabesque position required, as it echoed the personal challenge he was facing while working in three dimensions. Here, Degas masterfully creates an impression of agility and flexibility despite the heavy mass of the sculpture itself. He fights gravity and weight to achieve the utmost perfection - a smooth balance of stillness and evanescence that brilliantly transcribes the very extremes the human body is capable of reaching.