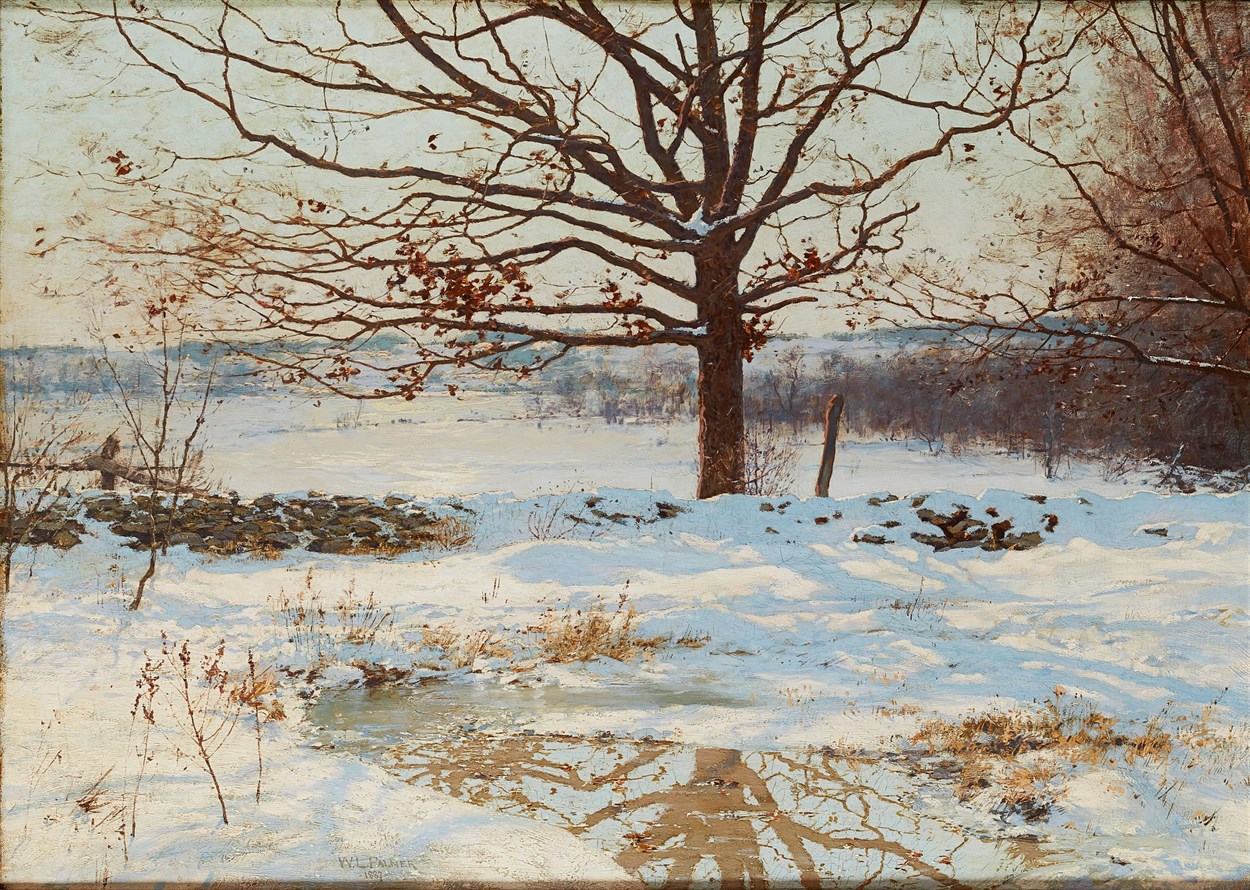 Dubbed "one of the last members of that group of nineteenth-century artists whose work is in no small measure responsible for the evolution of the American landscape school of painting," Walter Launt Palmer made himself a reputation in the history of American art by mastering the winter landscape, which he almost exclusively painted entirely from memory. Born in Albany, New York, to a sculptor father, Palmer studied under portraitist Charles Elliott and Hudson River School landscapist Frederic Edwin Church, who taught him a certain sense of grandeur, which he brilliantly instilled in the present work.
Dated 1887, January depicts a serene landscape blanketed in the snow - devoid of any form of human life. It is marked by a certain timelessness, the sole focus of the composition being a majestic reflection of a bare tree on a frozen puddle in the foreground. Through his energetic brushwork, the artist is able to capture the ever-changing effects of light and color, similar to Claude Monet's technique, which he is still experimenting with, at the same time in France. Like the French Master, Palmer adopts revolutionary Impressionistic codes, especially through his rendering of shadows on the snow-covered prairie via a myriad of glistening pastel colors, including bold blues, delicate pinks and soft greens. Such a technique was noted and praised by many critics for imbuing his canvas with a certain subtlety. When he exhibited January at the National Academy of Design in 1887, Palmer was indeed awarded the Hallgarten prize, given to the best work by an artist younger than thirty five years old. When Palmer won the Hallgarten prize, he was also elected an Associate of the National Academy of Design. Next to a review of January in his scrapbook, Palmer wrote: "First oil since one sold at N.A.D. in 1876." He meant that is was the first winter painting he had done in oil since 1875. It would be the beginning of a trend in Palmer's oeuvre that emphasized the quiet solitude of the winter season.
The present painting comes fresh to the American market all the way from Scotland, after having been in the prestigious private collection of Andrew Carnegie and his heirs, through which the piece was acquired.