William Holbrook Beard (American, 1825–1900)
The Guardians of the Flag 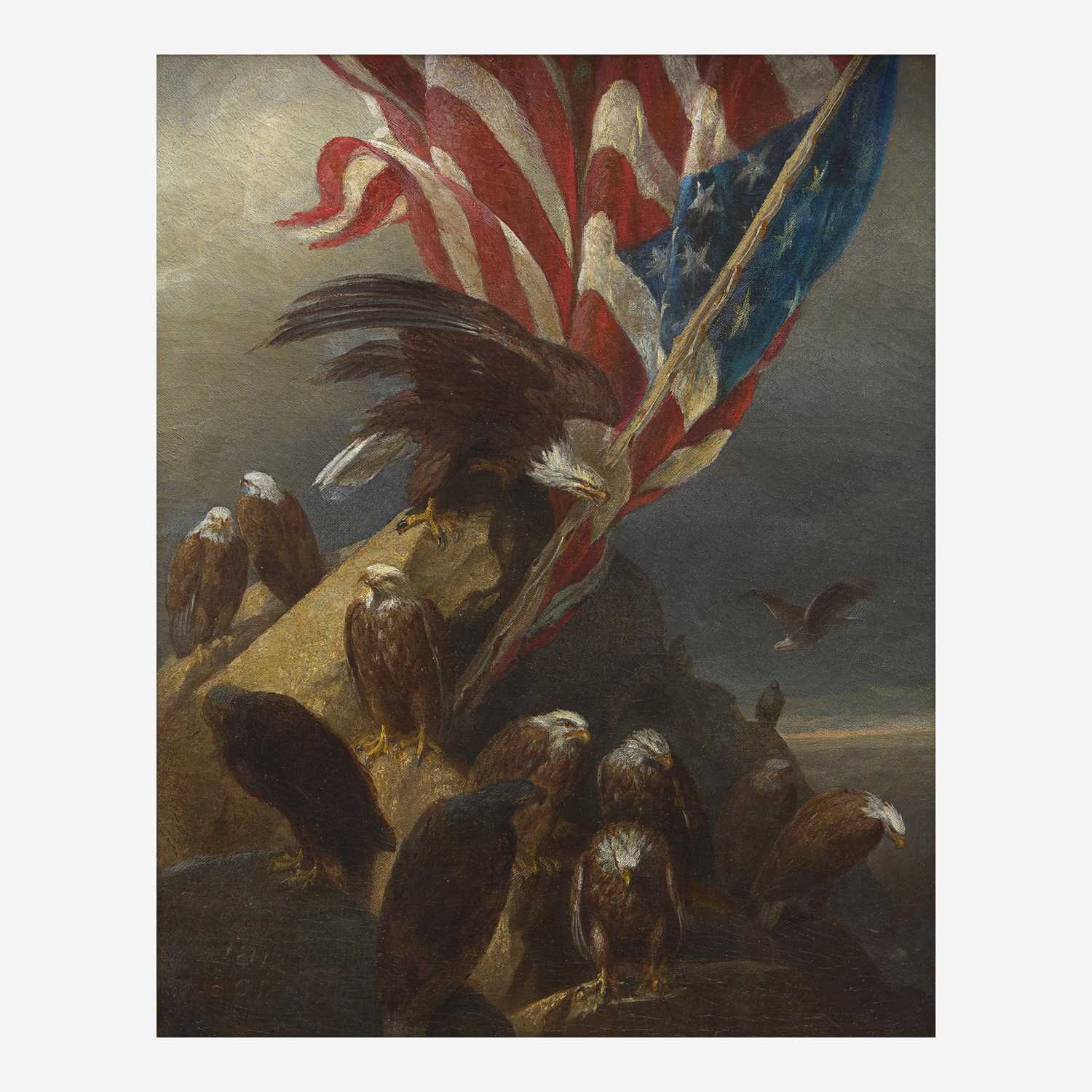 William Holbrook Beard (American, 1825–1900)
The Guardians of the Flag

William Holbrook Beard’s most celebrated works feature animals—frequently monkeys and bears, but also a roster of avian protagonists—engaged in human-like activities, or as ciphers for contemporary social and political happenings. Beard’s careful understanding of anatomy and sensitivity to the nature of his creatures distinguish his paintings, which were often sharply satirical or allegorical, as in The Guardians of the Flag.

Here, a convocation of eagles perches atop a rocky outcropping. One of them, wings outstretched, clenches in its beak an American flag, its stars and stripes unfurling in the wind. The balance of eagles, brown-bodied and alert, stand sentinel around the perimeter of the rock. Another, mid-flight, surveys the goings on below. The dates “1812” and “1861”—commemorating the onset of the War of 1812 and Civil War, respectively—are inscribed into a rock in the lower left foreground.

Painted in 1864 while the Civil War raged, The Guardians of the Flag is a not-so-subtle commentary on the imperiled American Republic. A gray sky, cloud-filled and turbulent, alludes to the present conflict, while the date, 1812, offers a pointed reminder of the struggles of yesteryear. Just a few generations removed from the War of 1812—whose own Battle of Baltimore would inspire Francis Scott Key to compose the Star-Spangled Banner—the flag, and its stout defense, was a matter of national concern.

Appropriately, Beard selected the bald eagle—national bird of the United States since 1782 and long a symbol of pride, strength and resolve—for his “guardians.” Protecting the flag and, thereby, preserving the Union, Beard’s platoon of eagles—thirteen in all—are rendered equal to the task. On the horizon, at some remove, Beard includes a glimmer of sunshine, and a glimmer of hope.

Born in Painesville, Ohio in 1925, Beard traveled to Italy, Switzerland, and Germany in 1856, where he emerged as a leading figure of the Düsseldorf School. Upon his return, after settling briefly in Buffalo, he relocated to New York City, leasing space at the Tenth Street Studio Building. There, Beard would work—and find camaraderie—alongside fellow artists, Winslow Homer, William Merritt Chase, and Fredric Edwin Church. The Guardians of the Flag, Beard’s hymn to national unity, finds easy parallels in Church’s Civil War-era canvases, among them Twilight in the Wilderness (1860), Our Banner in the Sky (1861), and Our Flag (1864). The last of these, a dramatic vision of the American flag planted atop a craggy mountain peak, echoes Beard’s confidence in the triumph of the Union.