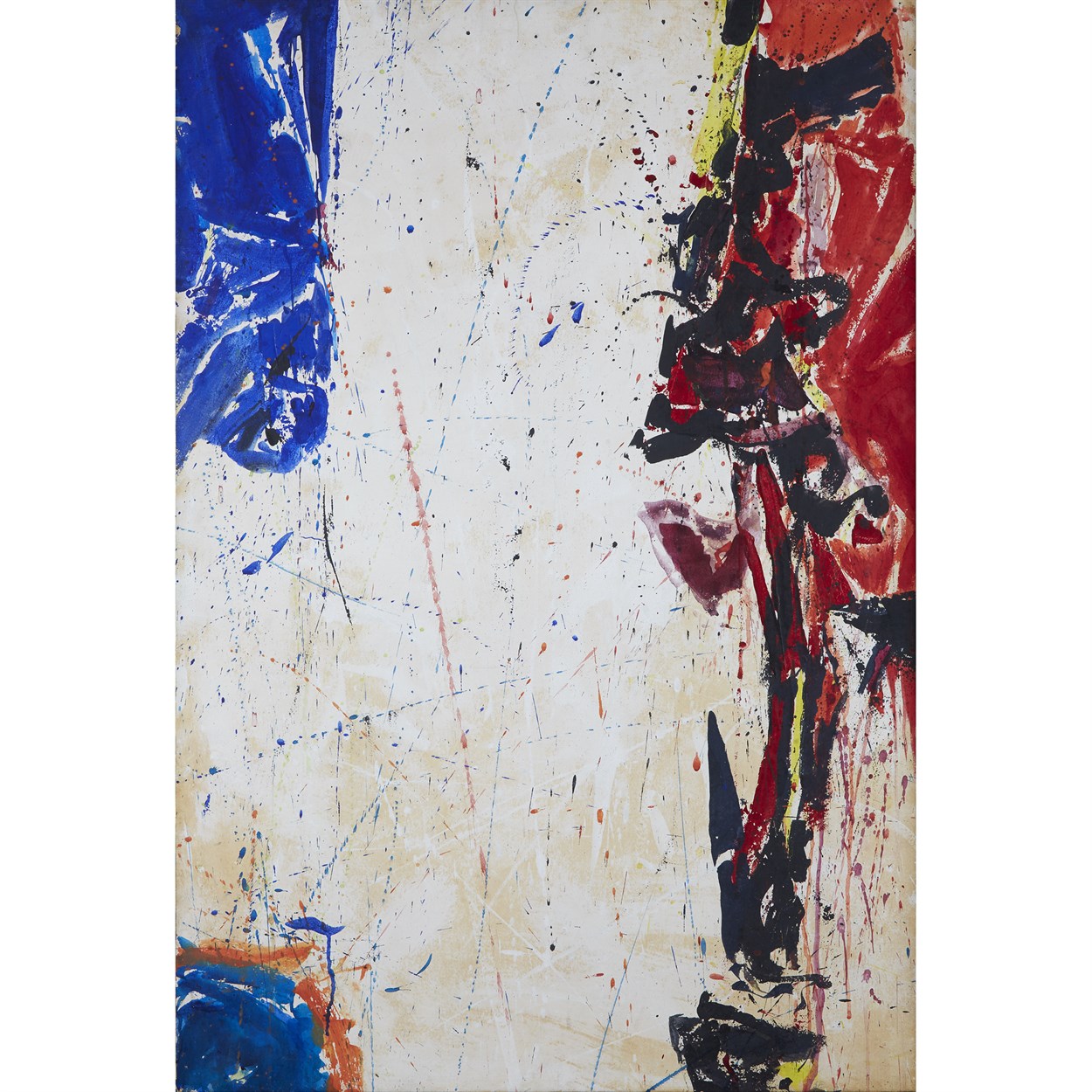 note:
This work is identified with the interim identification number of SF58-139A in consideration for the forthcoming Sam Francis: Catalogue Raisonné of Unique Works on Paper. This information is subject to change as scholarship continues by the Sam Francis Foundation.

note:
This work is identified with the interim identification number of SF58-139A in consideration for the forthcoming Sam Francis: Catalogue Raisonné of Unique Works on Paper. This information is subject to change as scholarship continues by the Sam Francis Foundation.

Throughout his artistic career, Abstract Expressionist Sam Francis often spoke of being intoxicated with light. This fascination began at the time he started painting, during the four years he was hospitalized for spinal tuberculosis in his early twenties. An aspiring physician with no prior painting experience, Francis turned to the medium as a means of recovery and distraction during his forced state of immobility. A particular source of inspiration in his work during this period was the dancing light on his bedroom ceiling, and the bold colors of the dawn and sunset sky which he often watched while confined to his hospital bed. Thereafter he commenced on a lifelong investigation into the perception of light and color, a pursuit that came to define his oeuvre. What interested the artist specifically was "the quality of light itself, not just the play of light and shadow but the substance of which light is made."1 He sought to make each painting "a source of light," commenting, "When I paint, I try to create the feeling of being in it."2

Executed between 1958 and 1959, "Red and Blue" was painted at a major turning point in Sam Francis' career. At this time he began to explore the compositional power of the background itself and the underutilized white color that had until then only acted as a support. Previously, Francis' paintings were largely composed of single, variegated colors which filled the entire space of the canvas. In the early 1950s, the artist had been living in Paris and had drawn inspiration from his contact with the work of French Impressionists and Post-Impressionists such as Pierre Bonnard, Claude Monet and Paul Cezanne. The influence of their explorations in color and the shifting effects of light is clearly reflected in his paintings from this period, which were often dominated by luminous, densely layered monochromes that he juxtaposed with equally bold contrasting hues that covered the expanse of the canvas. In this way, Francis was also linked with Expressionist artists such as Mark Rothko, Clyfford Still and Arshile Gorky. However, after a trip around the world in 1957, the artist's treatment of light and color shifted dramatically. Francis traveled extensively to locations such as Mexico, New York, Hong Kong, Thailand and India, but it was the months he spent living and working in a Japanese temple that proved to be the most impactful. What specifically interested Francis was the East Asian philosophical preoccupation with the void, and its reflection in their artistic utilization of negative space. Thus, Francis pivoted from his concern with color and instead focused on harnessing the power of white. He no longer treated it simply as a support but as a dynamic element that challenged and interacted with the other colors on the canvas. These white areas engaged in active dialogue with the surrounding colors and visually structured the work by directing colors into patterns, at once amplifying and diminishing the intensity of tones. Of this radical shift in composition, Curator William Agee says: "With this new openness, we are given more breathing room in which to move around the paint and the surface, with areas of white now modulating the color zones, pulling them back as we would part a curtain and affording us a glimpse of another kind of space…the space of infinity."3

Dominated by a luminous white space enlivened by subtle drips of pigment and counterbalanced by vibrant jewel-toned strokes of paint, "Red and Blue" is a celebration of color, light and space; a synthesis of vitality and serenity; the contained and the infinite. Its iridescent surface seemingly shimmers in a state of perpetual flux, as if light itself emanates from within the painting. The present work is an important example from an extremely momentous period of Sam Francis' career and was included in major exhibitions at the Art Institute of Chicago, the Sidney Janis Gallery and the Santa Barbara Museum of Art.