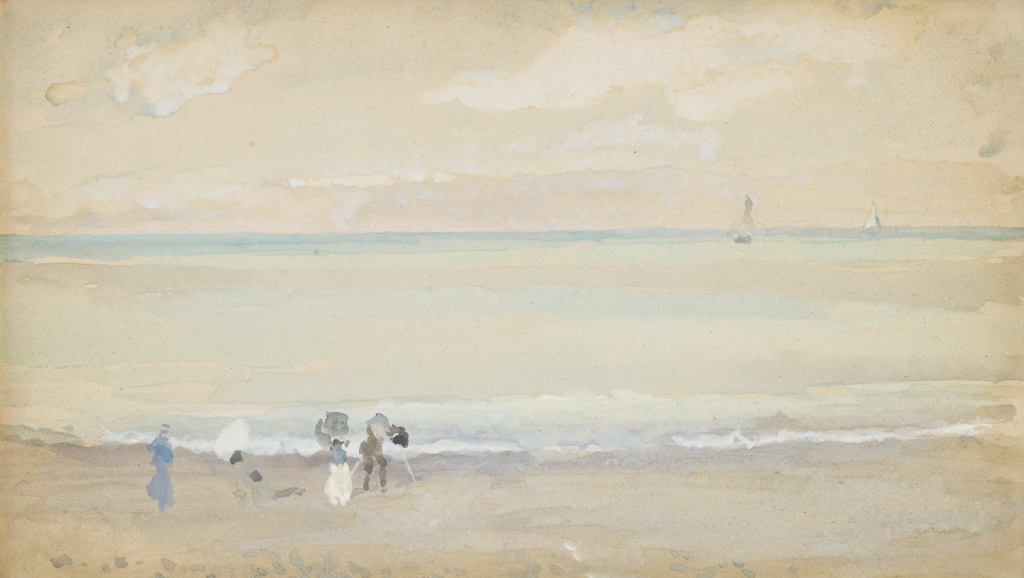 Watercolor on paper
Painted circa 1885

Watercolor on paper
Painted circa 1885

This work is included in the catalogue raisonné of works by James McNeill Whistler compiled by Margaret F. MacDonald, as catalogue number 1037, (illus.)

"It is possible that this watercolour yellowed after the exhibition in 1886 and this led to the change in title in 1889; several of Whistler's paintings suffered such sea changes. On the other hand, the colour scheme resembles that of other watercolours painted in Dieppe and it shares their restraint and economy. Apart from the greenish, turquoise sea, there is a range of greys on the beach and figures. White was used on the water and on the skirt. Variations were introduced by the pink of the boat and a lovely pearly green.
The subject shows Whistler's interest in recording figures not just as spots of colour or compositional aids, but as participating in activities. Dieppe provided plenty of opportunities to paint people at work and play. Photography was extremely popular by the mid-eighties. High winds, sea and sand permitting, seaside photographers were increasingly common, although the promenade, rather than the beach was the more usual venue. Whistler himself used photography to record and promote his work, and occasionally as a working tool and he collected photographs of work by artists whom he particularly admired. He discussed the possibilities of photography with friends like Degas, but he himself does not seem to have taken photographs himself." (MacDonald, Margaret F., James McNeill Whistler: Paintings, Pastels and Watercolours, A Catalogue Raisonné, Yale University Press, New Haven and London, 1995.)