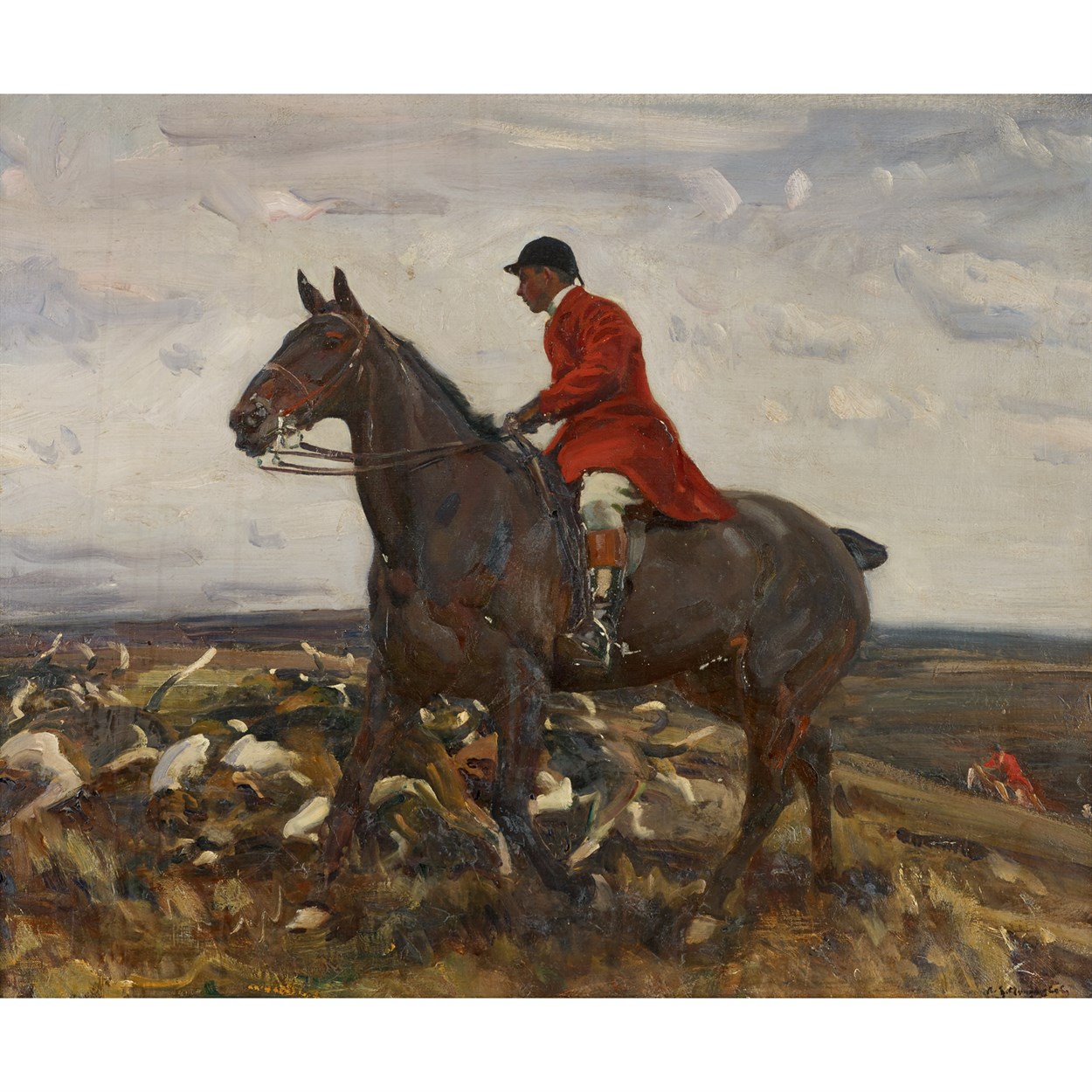 Sir Alfred Munnings is widely considered to have been the greatest equestrian artist of the twentieth century and his work continues to have a devoted following. The son of a miller, he was born in 1878 in Mendham, Suffolk in England. At the age of fourteen, he was apprenticed to a printer in nearby Norwich and began to produce graphic work and posters; the sureness of line demanded by the process of lithography would prove a constant throughout his artistic career. His skills as a fine artist were honed while also attending The Norwich School of Art in his spare time. Despite the fact that he lost sight in his right eye due to an accident, Munnings' formidable talent soon became apparent, and from 1899 onwards he would exhibit at the Royal Academy. Favoring rural scenes and representations of gypsy life early in his career, the First World War greatly influenced his preferred subject matter. From that time forward, the artist most often depicted the equine subjects that brought him the greatest acclaim and which continue to be his most sought after works. Although Munnings sought to serve as a soldier during the Great War, he was deemed unfit to fight due to his partial blindness. However, he did act as War Artist for the Canadian Cavalry Brigade and provided an invaluable historic record of the wartime years.
Munnings' love of the Cornish landscape stemmed from visits he had made between 1910 and 1914 to Newlyn, an area that was, at that time, home to the renowned artists' colony which had formed around the school created by Stanhope Forbes. He lived there for a time, and also in nearby Lamorna, where another artists' circle had evolved. The contrast with the East Anglian landscape was dramatic and his time in Cornwall was a highly productive one, resulting in some of his finest landscapes.

An avid huntsman, Munnings naturally explored sporting and hunting themes whilst there, an excellent example of which can be seen in 'Huntsmen and Hounds, North Cornish Hunt'. The present painting is one of a series of hunting scenes that the artist painted in Cornwall. Munnings had begun using the image of the single huntsman during his time in Mendham and Swainthorpe, and here he explores the motif again to great effect. The excitement of the hunt is accentuated by the blurry movement of the hounds at the feet of the horse, while the vivid red tunic of another huntsman can seen emerging over the crest of the hill. The composition as a whole is firmly anchored by the striking central figure of the huntsman silhouetted against the sky.