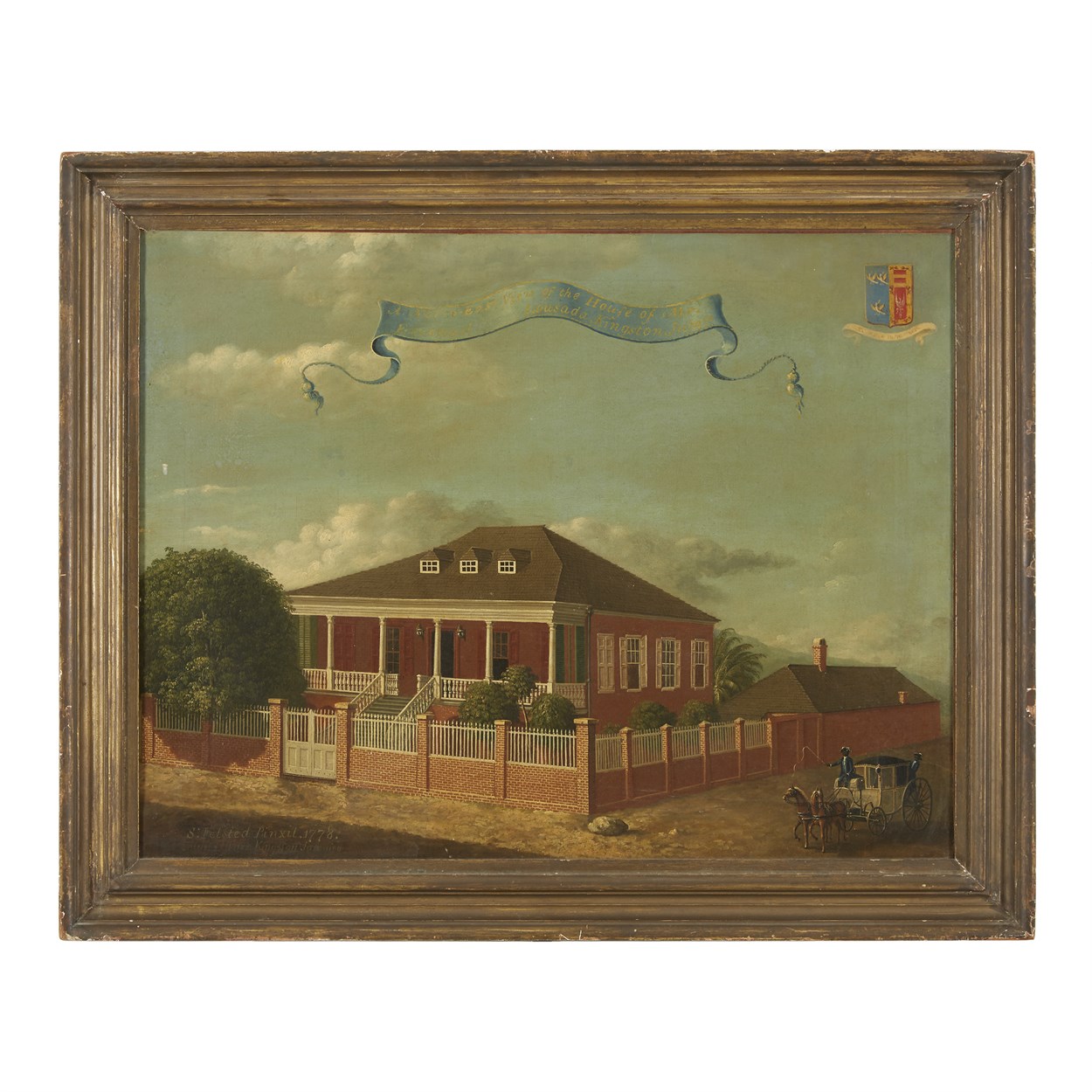 Provenance: Private Collection, Virginia.
The Institute of Jamaica documents that a painting of a Kingston residence by S. Felsted, dated 1778, was offered for sale to the Institute in 1947 by a London Art Dealer.

Provenance: Private Collection, Virginia.
The Institute of Jamaica documents that a painting of a Kingston residence by S. Felsted, dated 1778, was offered for sale to the Institute in 1947 by a London Art Dealer.

William Felsted, the father of Samuel Felsted (1743-1802), was an English-born merchant, ironmonger and organist, who arrived in Jamaica in the 1730s, but was in Boston in 1737, petitioning to establish a shop. In 1741, before returning to Jamaica, William Felsted married Joyce Weaver at Christ Church in Philadelphia. Samuel Felsted was born in Jamaica in 1743, was a property owner by the age of 19, and baptized as an Anabaptist in 1763 at the age of 20. He married Maria Laurence, daughter of a plantation owner, in 1770, and they eventually had eight children. In 1771, Felsted was admitted to the American Philosophical Society in Philadelphia--one of four Jamaicans to be accepted to the organization in the 18th century. In support of his application for membership and due to his interest in botany, Felsted sent drawings of Jamaican butterflies. Dr. James Smith, a Judge of the Court of Common Pleas in Jamaica, in a letter of support for Felsted's membership wrote, “Mr. Samuel Felsted, an ingenious young Gentleman of good reputation in this Town applied to me for an introduction to the members of your newly established Society, expressing a great desire to become a correspondent; being long convinced of his merit in the three Sister Sciences: Poetry, Painting and Music for which he has natural genius." Smith continues, "His education has been rather confined, but by great industry and force of native genius, he has recommended himself to the wise and learned of this island." After his admission to the Philosophical Society, Felsted sent plans for a horizontal windmill designed to power sugar mills. For most of his life, Felsted was the organist at St. Andrew Parish Church in Kingston, and is best known today as the composer of the first complete oratorio written in the New World-- Jonah, published in London in 1775.

Emanuel Baruh Lousada (1740-1797 or 1807) was a prominent Jewish merchant, land owner and trader in Kingston with family business connections throughout the West Indies and London. Lousada married an English cousin, Esther Lousada, who died in 1775, and later his brother Daniel's widow, Rachel. The Lousadas traced their ancestry to Granada, Spain and frequently used a Coat-of-Arms as seen in this painting.