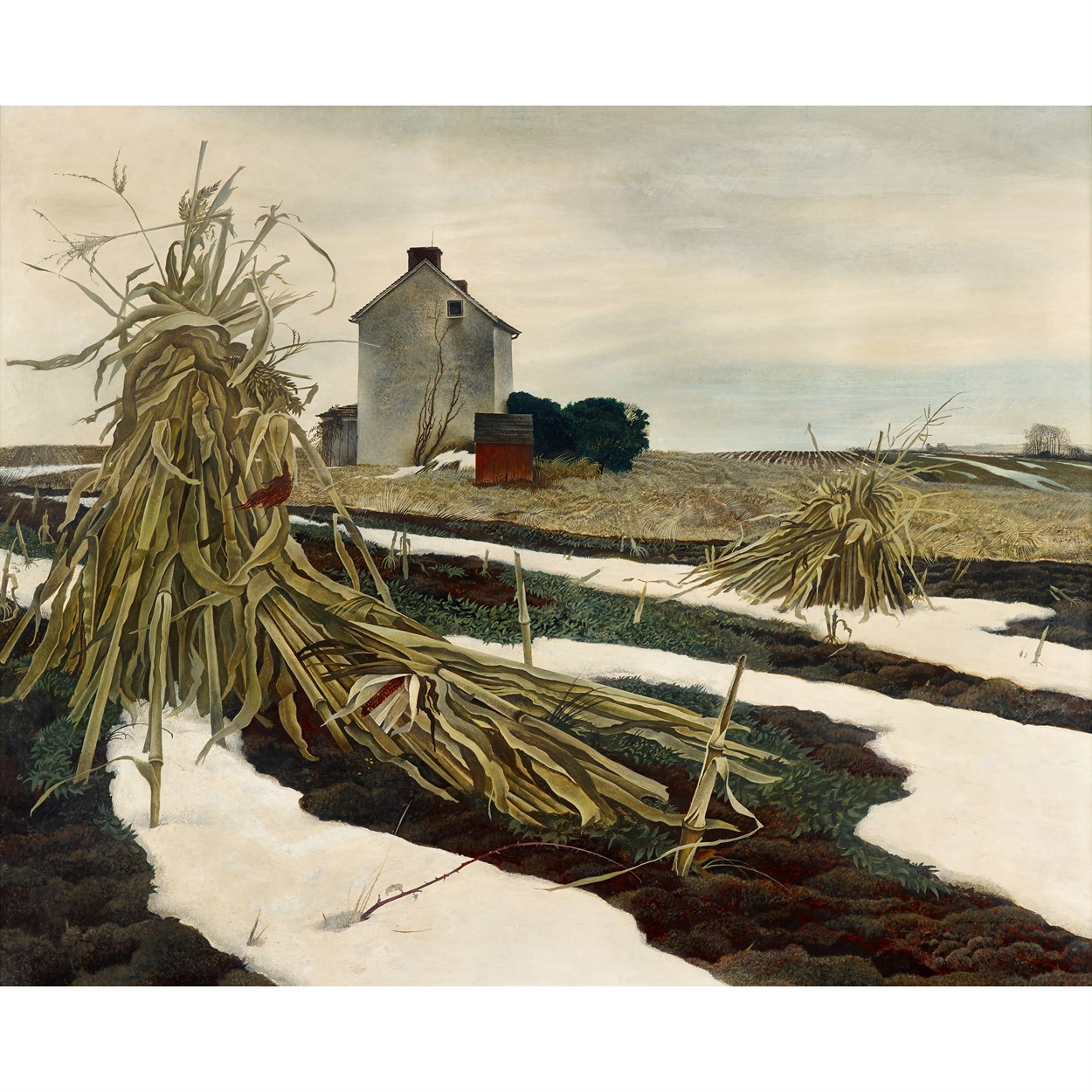 The present painting is to be included in the forthcoming Catalogue Raisonné of the artists' work.

Andrew Wyeth's "Winter Corn Fields" (1942) is reproduced here for the first time. Rarely exhibited since its purchase in the early 1940s, this tempera depicts a neighbor's house on Bullock Road in Chadds Ford, Pennsylvania. John Andress's property captured the imagination of both Andrew and N.C. Wyeth, and is featured in numerous works including Andrew's "Winter Fields" (1942) (see illustration) and "Soaring" (1942-50). A transitional painting, "Winter Corn Fields" looks both forwards and backwards. It is an excellent early example of Wyeth experimenting with motifs that would reappear in important future temperas. Furthermore, it reveals a young artist under the influence of prevailing styles in American art.
Wyeth and his art are products of a particular historical moment in the 1940s as he absorbed the works of mid-century American painters. The tilled fields in the background with their regularly patterned furrows evoke the stylized landscapes of artists such as Grant Wood. But these artistic influences recede into the distance as Wyeth focuses on the foreground. Here, he moves away from his purely descriptive paintings of natural things to more artful arrangements that suggest a strong human presence, foreshadowing later compositions.
Wyeth's intense focus on the dried corn shock looming over the bare blackberry bramble in the foreground is an early example of his highly composed "still life in nature" compositions-a major theme in his oeuvre identified in the 2005 exhibition, Andrew Wyeth: Memory and Magic. [1] Both "Winter Corn Fields" and the closely related "Winter Fields" (see illustration) embody this hybrid of still life and landscape painting that features close-ups of rocks, flowers, seashells, cornstalks and other things in a natural setting.
Wyeth's paintings are filled with hidden symbolism, and it is in works like "Winter Corn Fields" that we can track the genesis of his private iconography. The dormant blackberry bramble, a motif created to explore themes of loss and regeneration, returns to play a leading role in the artist's first response to human death: "Christmas Morning" (1944). The melting snow patch on the barren field becomes the resting place for his neighbor and surrogate father, Karl Kuerner, in the much-reproduced "Spring" (1978). The house, with the single small window in the middle ground punctuating the horizon, reappears as a motif for loneliness and inscrutability in many temperas, including "Christina's World" (1948).
Wyeth's painted objects are almost always associated with people, although the relationship is often obscure. The corn shock presiding over the bramble has an animate quality, and Wyeth described it as a "picture of a friend". [2] The anthropomorphic stack anticipates the creation of later paintings of sensate objects in the landscape, such as the rock in "Far From Needham" (1966) and the pumpkins in "Jack Be Nimble" (1976).
The red blackberry briar and dried corncob in the foreground partner with the green ground cover to initiate a lively zigzag of pigment that takes the viewer's eye deep into the painting. While many of the artist's early works are saturated with color, here we see him moving away from color and experimenting with the muted palette that would come to dominate his mature temperas.
By 1940, Wyeth began to favor egg tempera painting over oil. He manipulated the tempera in "Winter Corn Fields" to create a uniformly sharp focus, an apparently airless environment, and an unnatural light suggesting the qualities of a dreamscape. Wyeth would spend the rest of his life tinkering with and sharpening these otherworldly environments, oscillating between realism and magic realism.
-Anne Classen Knutson, Curator of "Andrew Wyeth: Memory and Magic", 2005-2006