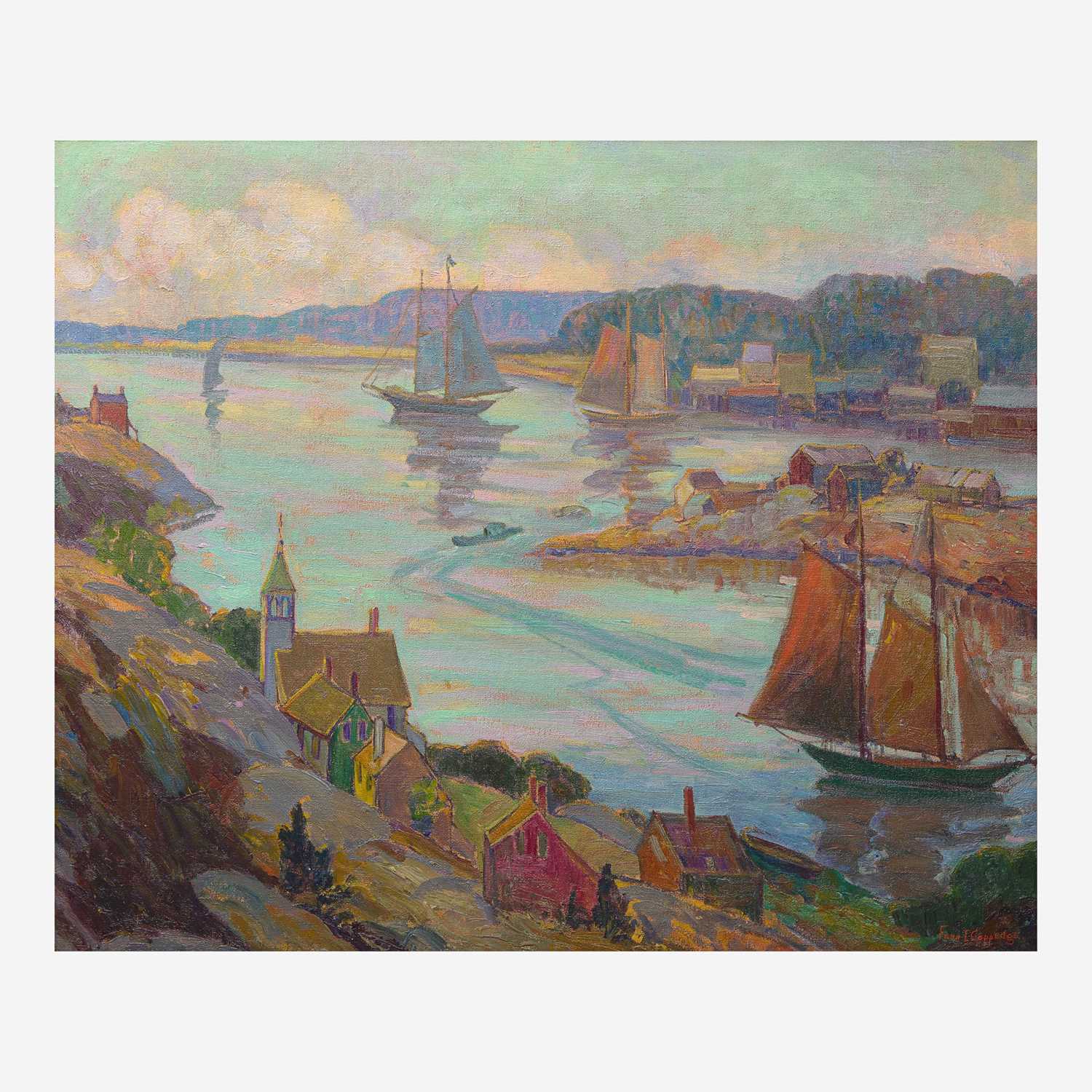 The present painting will be included in the forthcoming Fern Coppedge Catalogue Raisonné compiled by Les and Sue Fox (2022).

Fern Coppedge first visited Cape Ann, and especially the harbor of Gloucester, on the advice of her friend Henry Snell in the summer of 1916. She regularly visited the enchanting harbor thereafter until 1934. Like Henry Fitz Hugh Lane, Winslow Homer, Childe Hassam or Jane Peterson, Coppedge felt attracted to the unique New England light, and enjoyed capturing the shimmering sea, picturesque clapboard houses, lobster traps, and rugged granite cliffs. Contrary to her male counterparts, she mostly avoided the touristic locations and preferred to paint in quaint, semi-deserted places, such as Pigeon Cove, Norman's Woe, or Rocky Neck (East Gloucester), a small inlet jutting into Gloucester's vast harbor - as shown here. A master colorist, Coppedge bathes her subject in a soothing light, and ensure the composition's overall dynamism via an alternance of bold hues of color, which gives depth to the picture and helps the viewer's eye to reach the far horizon. Seen stretching across the bottom of the canvas, the town is symbolized by a row of colorful boxes and cubes of various formats and sizes. All boldly colored, they recall Coppedge's signature cottages from Bucks County that she usually depicts blanketed in snow. Water here occupies most of the canvas. Painted in turquoise, lavender and pink hues, the sea blends with the similarly colored sky above, and contrasts with the nearby rusty and earthy tones, thus contributing to the work's light atmosphere and airy quality. Boats moored in the harbor - a favorite motif of Coppedge - are meticulously rendered and are responsible for the painting's overall structure, and balance. As to their slow, vanishing trail left behind, it poetically suggests the cozy, tranquil atmosphere of an old-fashioned New England town, which the artist liked so much.

Although born in Decatur, Illinois in 1882, Fern Isabel Coppedgeis considered one of the most significant female artists of the Pennsylvania Impressionist movement. First enrolled at the Art Institute of Chicago and then the Art Students League of New York, Coppedge eventually moved to Philadelphia, where she attendedthe prestigious Pennsylvania Academy of the Fine Arts. The school and its notable alumni—Henry Snell and Daniel Garber among them—exposed Coppedge to Impressionist techniques and the burgeoning community of artists along the Delaware River in Bucks County, an hour north of Philadelphia.Freeman’s strength in presenting Pennsylvania Impressionist material is evident in our track record of Coppedge sales. Her quintessential Bucks County landscapes have regularly exceeded their pre-sale estimates; The Delaware Valleyachieved $329,000 in a 2006 sale, Creek Bridge Snow (Carversville)sold for $262,000 in 2018, and The Delaware –Reflections achieved $221,000 in 2004.In 1920, Coppedge purchased her first studio in Lumberville. Nine years later, she built a new home and studio on Main Street in the center of New Hope. She retained ties to Philadelphia’s art scene through her involvement in such groups as the Philadelhpia Art Alliance and the Philadelphia Ten. Today, Fern Isabel Coppedge is best known for her bright, warm-hued wintry scenes, usually set in Bucks County, along the Delaware River. Like many of her Impressionist peers, she was committed to painting year-round en plein air, and frequently braved the elements in a bearskin coat to capture the subtle effects of changing light, a technique at which she particularly excelled.