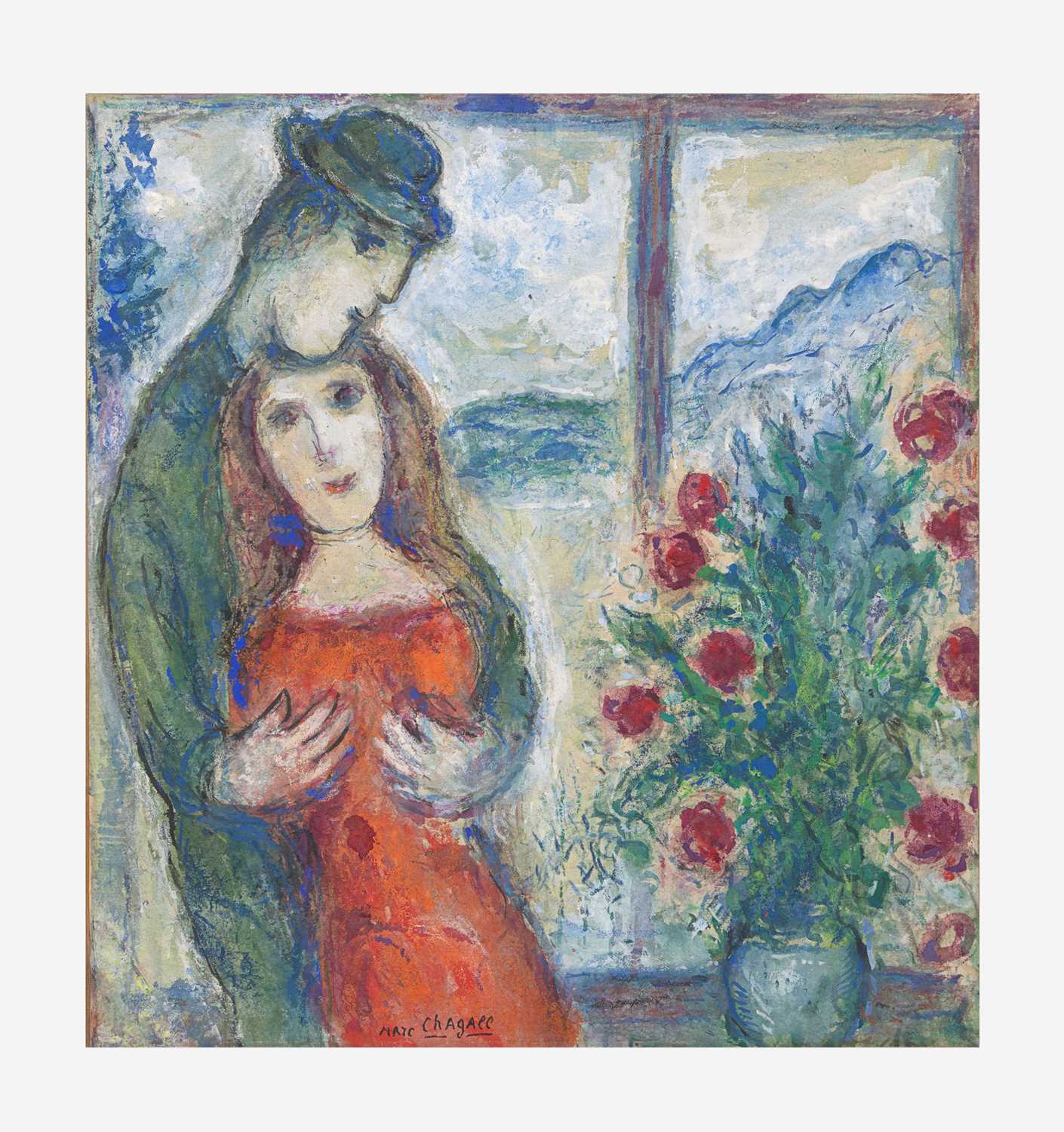 We wish to thank the Comité Marc Chagall for confirming the authenticity of the present Lot, which will be accompanied by an official Certificate numbered 2022035, signed by Paul Schneiter and dated February 25, 2022.

The present work, the richly colored large gouache Devant la Fenêtre à Sils, is undoubtedly the true highlight of the collection. In the picture, Chagall shows a couple caught in a loving embrace by a bouquet of flowers, and against a window overlooking the Alps. This image of a happy, tender moment stopped in time is a quintessential one, as lovers were among Chagall’s most common themes, which he often revisited throughout his career and multiple love affairs. Following the death of his teenage sweetheart Bella, Chagall partnered with Valeria McNeil, a married woman who became the mother of his son. The present feminine figure is most likely a reference to Valentina Brodsky, "Vava", the artist’s last wife who enabled him to find respite after years of tension and anxiety that had marked his work in the years during and after the Second World War. The present work bursts with enthusiasm and warmth, which recalls Chagall’s bliss period in the South of France initiated earlier in his career, and which influenced his later work as the artist definitely relocated to Saint-Paul-de-Vence in the mid-1950s.

As such, it proves how biographical all of Chagall's oils, drawings and even lithographs can be. Each work is conceived as a way to perpetuate an old memory, as a token of a loving, fond moment lost in the past, "that of a plenitude as fresh as a bouquet of flowers." In doing so, Chagall embodies the old myth associated with the invention of painting, that of a young draughtswoman tracing the shadow of her deparitng lover on the wall, so as not to forget him and forever preserve an image of him. As such, every element in the composition becomes a pretext for the evocation of love, its energy, its luxury, but also its fleeting nature, it fragility: the couple's love, just as the lush bouquet, can wither, tremble and eventually dissolve into Chagall's soft, hazy touch, only to leave behind the stinging souvenir of a past moment of romantic bliss. It is a way for Chagall, who lived through the entire 20th century, and experimented both world wars and many revolutions, to warn his viewer, and thus transform his work as a contemporary momento mori: let us gather the roses of this bouquet of life, and seize the day before it is too late.