After Alessandro Algardi called L’Algarde (Italian, 1598-1654)
A Pair of Monumental Bronze Sculptures, 'Jupiter Victorious over the Titans,' cast by Charles Crozatier, circa 1850 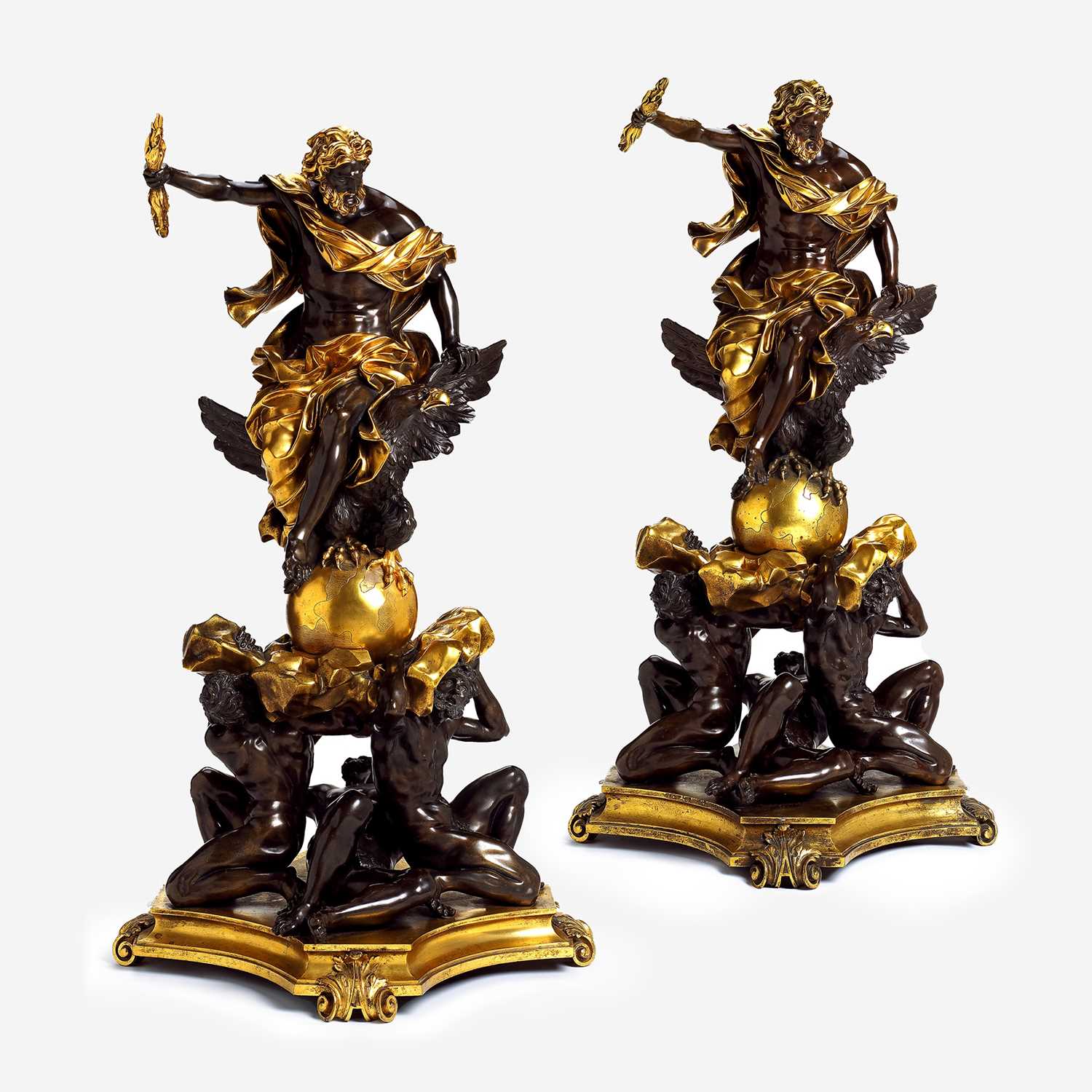 After Alessandro Algardi called L’Algarde (Italian, 1598-1654)
A Pair of Monumental Bronze Sculptures, 'Jupiter Victorious over the Titans,' cast by Charles Crozatier, circa 1850

Gilt and patinated bronze, depicting Jupiter wielding a thunderbolt in his right hand, and sat upon an eagle poised on a globe, resting on rockwork supported by three kneeling Titans, on square molded base raised on acanthus scroll feet, one impressed 'CROZATIER'; sold together with a pair of wood pedestals.

The famous model from which the present examples are derived was originally conceived as one of four fire chenets representing the four elements with personifications of Jupiter, Juno, Neptune and Cybele, commissioned from Alessandro Algardi for Philip IV of Spain around 1650. Only two of them, Jupiter and Juno, were completed by the artist before he died in 1654, the other two were finished by his pupils. When they arrived in Spain they were not used as chenets but given by the King to the Duque du Terra Nueva where they were adapted as decorations in the fountain at the jardin de la Isla at Aranjuez.

The present bronzes are probably cast from the 'Chenet de l'Algarde' in the Louvre (MR 3262), which was a copy cast in 1682 for the Versailles palace, and which was later in the Chateau de Tuilleries and Chateau de St Cloud. They were cast by the renowned French bronzier Charles Crozatier (1795-1855), who pioneered a new casting process for large statues. He was apprenticed to the celebrated silversmith Jean Baptiste-Claude Odiot (1763-1850), was a pupil of both Pierre Cartellier (1757-1831) and Francois Joseph Bosio (1769-1845), and was commissioned by Louis XVIII to replace major French sculptures lost in the revolution. The eponymous Musée Crozatier, inaugurated in 1868, was built in his honor.