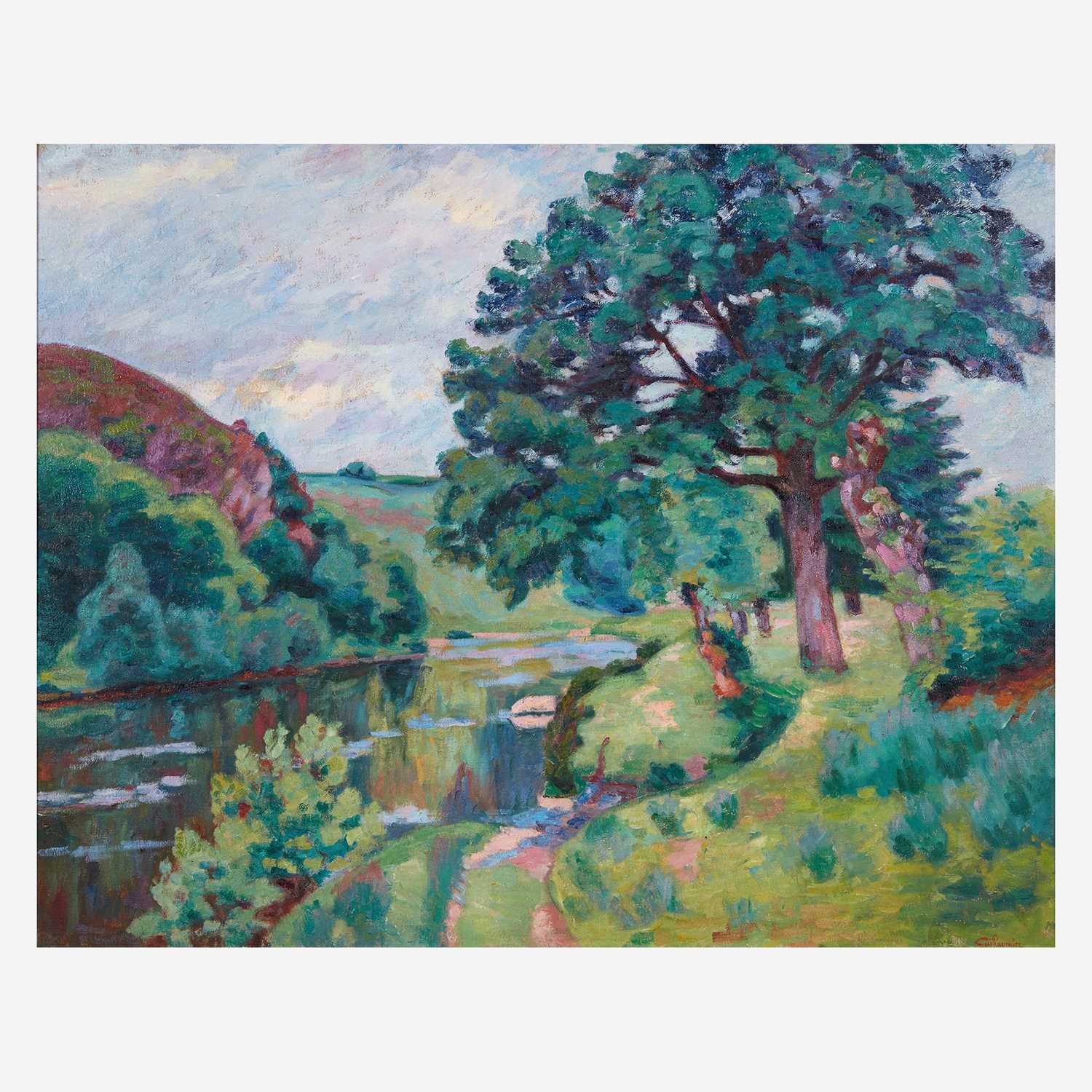 We wish to thank Le Comité Guillaumin (Dominique Fabiani, Stéphanie Chardeau-Botteri, Jacques de la Béraudière) for confirming the authenticity of the present lot. The painting will be included in the second Volume of the Catalogue Raisonné of the work of Armand Guillaumin, and accompanied by a Certificate of Authenticity dated October 20, 2021.

La Roche de l’Echo was painted in Crozant, located in the Creuse region, central France, and was a subject that Armand Guillaumin revisited in his oils on numerous occasions. As in the present work, most of the Crozant paintings feature La Roche in the center left of the composition, accentuated by a bright, rich color palette – a harbinger of Fauvism. Guillaumin was, in fact, the leader of the so-called École de Crozant, a group of artists who depicted landscapes in the Creuse region. Importantly, he was also a founding member of the Impressionist movement – along with being its longest surviving member – and is credited with organizing the inaugural 1874 Impressionist exhibition. From the 1870s through the 1880s, he went on to exhibit his work in six Impressionist exhibitions, as well as at the Salon des Refusés. Guillaumin was also a close friend of Paul Cézanne and Vincent van Gogh, with whom he had in common paintings featuring bold coloration combined with painterly brushwork, as in the present lot.

Guillaumin was not the only Impressionist painter to paint in the Creuse region. Monet in fact executed several canvases in Fresselines, where he developed the first of his “series” experimentations. While Monet's canvases are more austere and show a wild, often stormy aspect of the region, Guillaumin's rendition of the Creuse is always more picturesque, joyful and pastoral. He often painted the same locale, but always introducing a different element within his compositions, unlike his counterpart Monet. In the present painting, for example, the view is a bit broader than in other canvases, with a full-on depiction of La Roche (The Rock) at center left. What remained consistent through his landscapes in Crozant was a lack of any human life and presence, as if the landscape was enough, contrary to his cityscapes.

Both Monet and Guillaumin were equally fascinated by the region though, as it represented to them the purest form of Nature, an area where modernity, progress and industrialization had not yet invaded (similar to Gauguin's affinity for Brittany and Tahiti). It attracted Guillaumin so much that he decided to establish himself permanently in the region after first exploring it in 1893, and eventually found himself at the head of a colony of artists, once again similar to Gauguin in Pont-Aven. He loved the area because of the dramatic, isolated views and the contrasting colors the landscape offered, as exemplified here by the fauve-like colors (orange was Guillaumin's favorite color, which he would never mix with others). He employs a bold and modern color palette to show how an old, deserted and picturesque landscape can in fact be the main source of inspiration, the main revelation for “a new way of painting.”