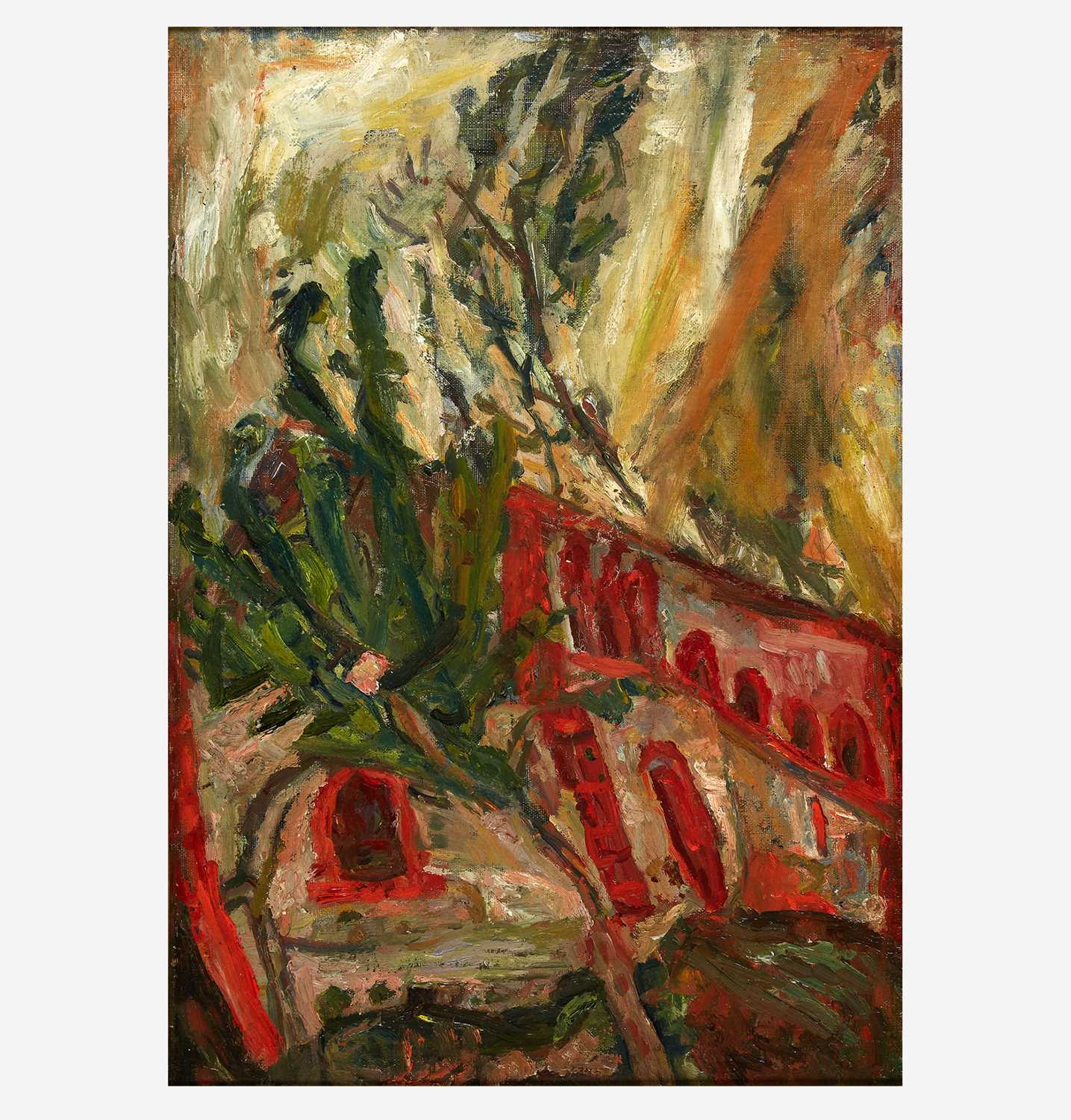 Under the threat of German invasion as World War I progressed, Chaïm Soutine left Paris for Vence in the south of France in 1918 with his friend and fellow painter Amedeo Modigliani. Soutine spent the next three years traveling throughout the sun-soaked region, perhaps his first time away from the city after moving to Paris from his native Smilovitz (in present day Belarus) in 1913. Soutine’s landscape painting developed during the artist's time in Provence, beginning with his visit to Vence in 1918-1919.

Revered over time by artists and authors like Henri Matisse, Raoul Dufy, Marc Chagall, and D.H. Lawrence, Vence was considered the “heart of Provence” for its charm, seclusion and historic interest. The turbulence of Soutine’s painted landscapes from this time, roughly 1919-1922, suggest more about his own emotional state and personal psychology relating to the aftermath of the war, rather than an account of his direct observation of the Provençal landscape. The trees, bridges, mountains, and houses in his view became a means for his expression, an atmosphere he could deconstruct and exaggerate for his own purposes.

Soutine returned to Paris in 1922 and the following year his dealer Paul Guillaume exhibited over fifty paintings in an exhibition, largely from his time in the south. Philadelphia collector Albert C. Barnes visited the gallery and purchased the entire oeuvre for his collection, transforming the little known and impoverished artist’s life and bestowing new importance upon his work.

Many of the Barnes paintings, particularly Landscape with Houses (c. 1919), Landscape with House and Tree (c. 1920-21), and Landscape with White Building (c. 1920-21) relate directly to the turbulent Le Viaduc Rouge (c. 1919) on offer here. Painted quickly, with areas of thin and thick application, the disorienting landscapes twist and swirl under Soutine’s hand, with elements of the built environment, whether houses, a church, or a bridge at center, accentuating the undulating nature of Soutine’s line. The numerous bridges and viaducts connecting the Provençal towns Soutine visited, provided endless angles and plays of positive and negative space for his experimentation. In Le Viaduc Rouge, the structure appears to rise up out of the right side of the canvas, culminating in two central trees whose branches stretch up to a bright and turbulent sky.

The Chaïm Soutine Le Viaduc Rouge comes from a prominent Philadelphia estate which also includes paintings by Jules Pascin, Armand Guillaumin, and other artists of the style that was popular in Philadelphia art circles during Barnes’s time. Soutine’s work in particular has garnered special attention recently, as Philadelphia’s Barnes Foundation and Les Musées d’Orsay et de l’Orangerie in Paris organized an exhibition in 2020-21 that emphasized the artist’s unique impact on Abstract Expressionist painter Willem de Kooning and his continuing legacy today. Soutine stands as a pivotal figure in European Modernism and Le Viaduc Rouge provides a vibrant and dynamic example of his work.