A Chinese carved and underglaze red "Dragons and Waves" vase, Meiping
Yongzheng six-character mark and of the period 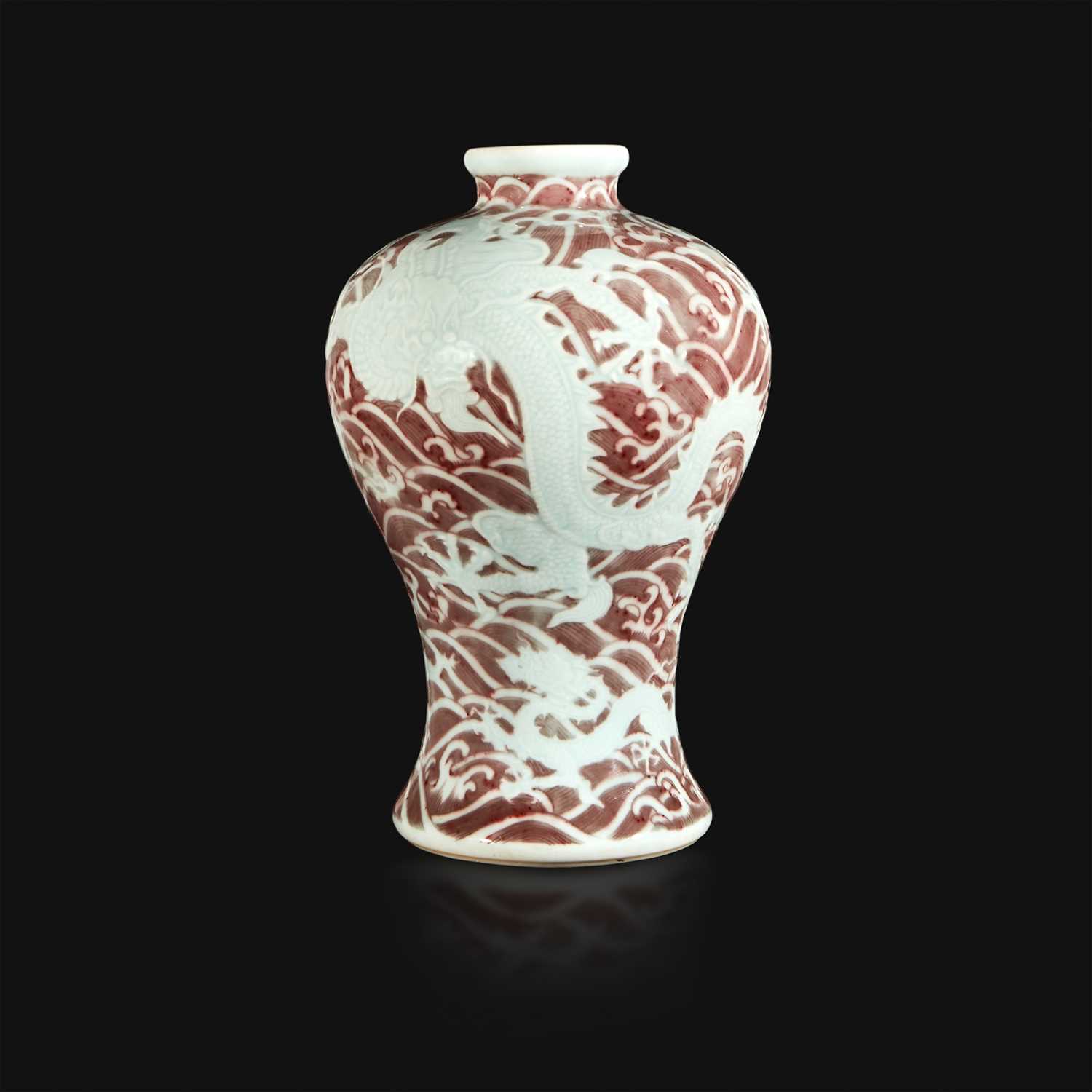 A Chinese carved and underglaze red "Dragons and Waves" vase, Meiping
Yongzheng six-character mark and of the period

***PLEASE NOTE, THIS IS A PREMIUM LOT. A DEPOSIT IS REQUIRED TO PARTICIPATE IN BIDDING ON THIS LOT. PLEASE CONTACT CLIENT SERVICES FOR FURTHER DETAILS.***

Of robust form with swelling shoulder, short cylindrical neck and flared lip and foot, the shoulder carved in low relief with two dramatic sinuous five-clawed dragons, above a smaller pair of incised dragons at the foot, all depicted against stylized crashing wave in underglaze red, a pale blue tint to the glaze, underside with six-character mark within a double circle.

Provenance: The Collection of Sheelah M. Langan (1910-1993), thence by descent in the family of the present owner. Sheelah Langan served in the United States Foreign Service, joining during World War II, retiring in 1970. She was variously posted to Rome, Bangkok, Tripoli, Rabat, Athens, London, Bogota and Mexico City.

NOTE: The present vase is a rare example of a small group of wares made for the Yongzheng court, inspired by Yongle period (1402-1424) porcelain prototypes, themselves based on Yuan styles of decoration, which feature reserved dragons carved in low relief against a ground of crashing waves executed in variations of underglaze blue and red.

There appear to be two closely related Yongzheng mark and period types of which the present vase is a part: One version, slightly larger at about 13 ¼-13 3/8" in height and with more stylized crashing waves, is typified by the examples in the collection of the Palace Museum, Beijing, illustrated in "The Complete Collections of Treasures of the Palace Museum, Blue and White Porcelain with Underglaze Red (III), 2012, p. 187, no. 171, the meiping bequeathed to the Metropolitan Museum of Art, New York by Mrs. H. O. Havemeyer in 1929, #29.100.312, and the example formerly in the collection of Stephen Junkunc, III, sold at Christie's New York, September 21, 1995, lot 225. The second group, to which the present vase belongs, includes a meiping sold in London in 1966 and now at the Cleveland Museum Of Art, Ohio, bequest of Mrs. Severance A. Millikin #1989.314 , and another, formerly in the collection of the Manno Art Museum, Japan, sold at Christie's, London, June 21, 2001, lot 109. This second subgroup appears to be more solidly potted and more closely emulating the Yongle period prototypes.

Compare the series of reconstructed Ming meipings excavated at the Imperial kiln sites at Dongmentou in 1994 and Zhushan in 1999 and 2003, illustrated in "Imperial Porcelains from the Reigns of Hongwu and Yongle in the Ming Dynasty", Beijing, 2015, pp. 173-179, nos. 79-82. For other examples of Yongzheng mark and period porcelains with carved dragons reserved against a blue-decorated ground in the Palace Museum, Beijing, see "The Complete Collection of Treasures of the Palace Museum, Blue and White Porcelain with Underglaze Red" (III), pp. 90, 115, 116, nos. 76, 101, 102.


In the description for the Palace Museum meiping cited above, the author discusses the theme of larger and smaller dragons and relates them to the saying "Canlong jiaozi", which may be translated as "the Eastern [Blue] dragon teaching his son". This has been variously understood to imply not only the importance of teaching the young, but also to bring one's descendants up to succeed in court or higher office. This would certainly have had relevance for the Yongzheng Emperor who succeeded his illustrious father, the Kangxi Emperor, and in turn was to nurture the development of his own son, the Qianlong Emperor. These three Emperors reigned over what may be described as a golden age for China and the Arts. Hajni Elias, in her essay discussing an enameled dragon vase from the Qianlong reign, sold at Sotheby's, Hong Kong, April 3, 2019, lot 3614, also notes a cultural source of the saying as "having been recorded in the Song dynasty (960-1279) Confucian reading primer, the Sanzi jing [Three Character Classics]".