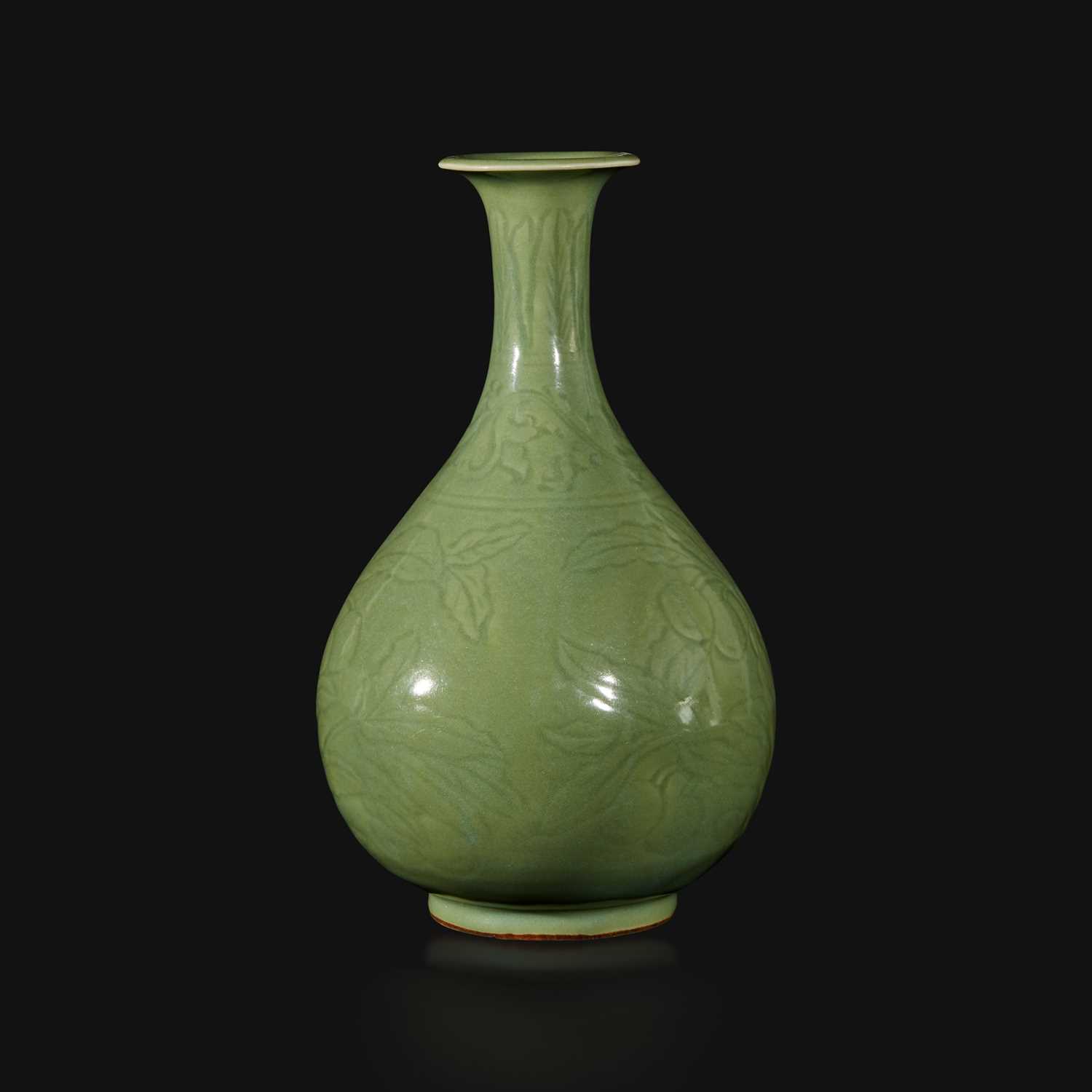 Of elegant pear-shaped form, with swelling body, waisted neck and flared lip, all on a low circular foot; the body incised with two fruiting sprays, probably loquats, the shoulder with a scrolling foliate band, the neck with upright leaves, all with an even sea-green glaze, recessed circular underside.

Provenance: Formerly private American collection, by descent from their parents
Acquired by the present owner from the above

NOTE: Bottle vases of pear-shaped form were exceedingly popular as wine vessels in the Yuan and early Ming dynasty, with examples produced at the Jingdezhen porcelain kilns as well as at the Longquan celadon kilns. Similar bottle vases, often of blue and white porcelain, are depicted in court scenes portrayed in 15th century Timurid illuminated manuscripts, such as those illustrated by Laurence Binyon et all in "Persian Miniature Painting", New York, 1971, plates XXXIII-A 42(d), XLVII-A 49(h), XLIX-B 49 (p) and LXVII. This graceful form was revived numerous times in centuries thereafter.

The elegant potting and refinement of silhouette, together with the quality and style of the incised designs strongly support this vessel's inclusion among a body of works made for Chinese imperial use in the early Ming dynasty, particularly during the early 15th century reigns of the Yongle and Xuande emperors. Several related early Ming examples from the Qing Court collections, preserved in the Palace Museum, Beijing are illustrated in Geng Baocheng et al, "Longquan of the World, Longquan Celadon and Globalization", vol. 1, p. 188-9, no. 120; vol 2. pp. 166-166, no 99; and ibid pp. 168-169, no.100. See also a vessel of this form, with later silver spout, handle and cover, in the collection of the Topkapi Sarayi, illustrated by T. Misugi, "Chinese Porcelain Collections in the Near East, Topkapi and Ardebil", vol. 2, Hong Kong, 1981, p. 223, T.162, and another with later handle, ibid p. 263, T.160.

The motif of fruiting sprays, such as peaches, grapes, lychees, kumquats, pomegranates and loquats, often decorated Jingdezhen blue and white porcelains and were also incised into the bodies of Longquan celadons, where the carved lines collected the thick green glaze. The rounded fruit borne on long curved stems with deeply-ridged lanceolate leaves depicted on the present vase are likely to be loquats. The loquat, also known as the Chinese plum, has various symbolic connotations such as endurance, overcoming adversity, and luck, because it flowers in the autumn and winter and the fruit ripens in the spring. Additionally, the bright yellow color of the ripe fruit is said to symbolize gold or wealth. This use of loquats as a main motif is rare. For an early Ming dynasty ewer with body of similar form, incised with similar fruiting sprays in the Palace Collection, Beijing, see Geng Baocheng et al, vol. 1, pp. 194-195, no. 123, and ibid. vol 2, pp. 210-211, no. 125 for a large dish with similar fruit spray as a secondary motif, depicted on the exterior.