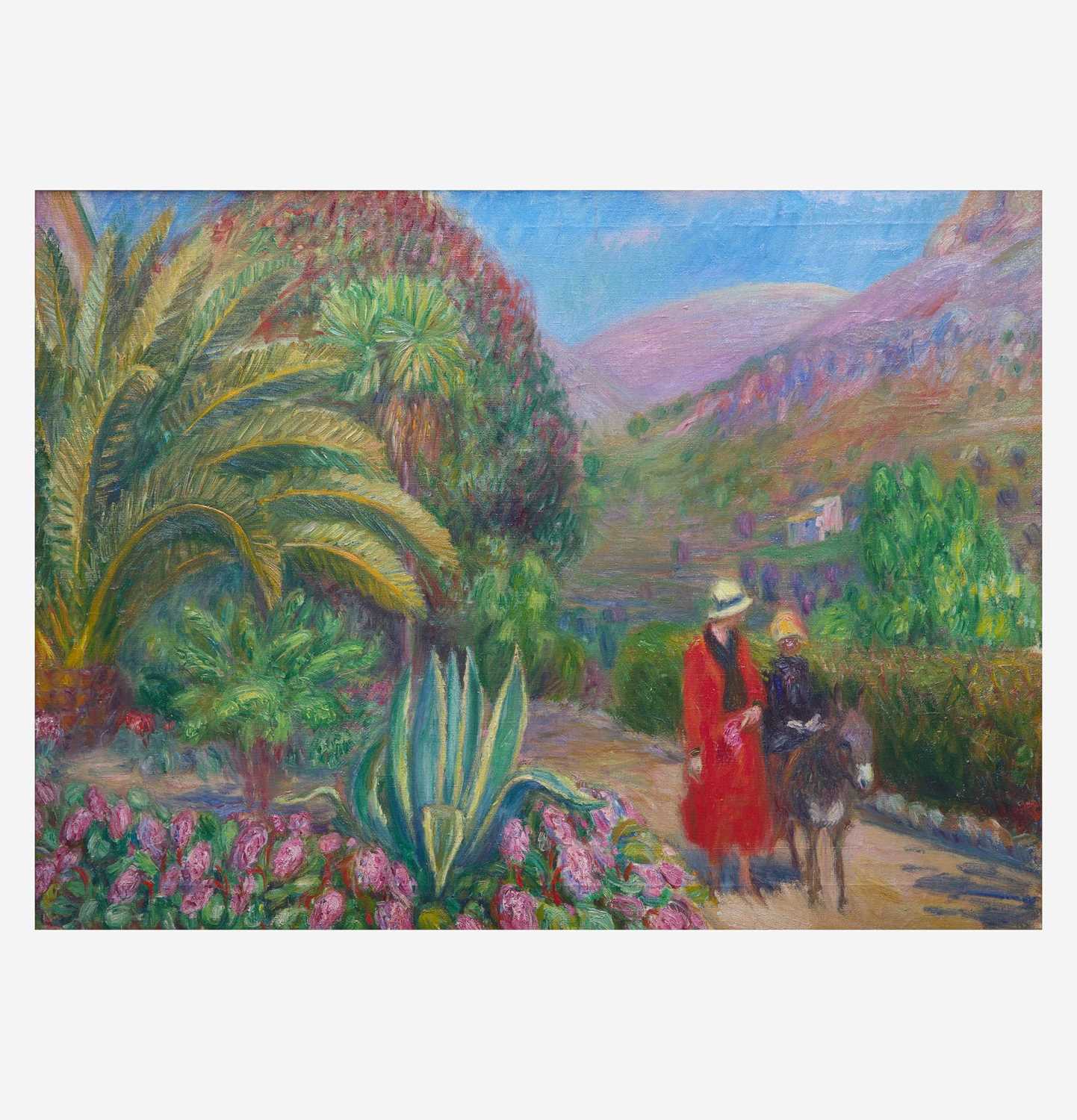 Under a biting Provençal summer sun, an elegant adult woman dressed in red walks on a dirt road. She looks by her side to watch her child riding a donkey headed towards us. They are surrounded by a lush, tropical and englobing vegetation, which appears to protect them. In the distance, nestled in the verdant hills, sits a modest white house. Maybe it is theirs, and where they come from? Likely executed during the artist's final eight year stay in France (1925-1933), Afternoon in Provence showcases the influence that French artists such as Edgar Degas, André Derain and Pierre-Auguste Renoir had on Glackens, as they were pioneers in exploring, and rendering the beauty of the south of France onto their canvases.

While they travelled in and around Paris most of the year, Glackens and his family spent the winter months in Vence, in a villa which the artist's son, Ira, would describe as "a Victorian edifice with a cupola overlooking the whole town and the Mediterranean beyond. Behind it loomed the Baou des Blancs, a curious domed mountain with the ruins of the Knights Templars, and a road wound by down which black-garmented women came... Les Pivoines [The Peonies] was the name of the villa." Contrary to other, similar canvases from the same period, Glackens does not focus on the structural and spatial qualities of the landscape in Afternoon in Provence. Instead, he shows here the more gentle aspects of the Mediterranean terrain, and emphasizes its conviviality via rich colors and a vivid impasto. The scene is imbued with a contrasting sense of fresh delicacy and explosive warmth. Spontaneous in execution, refreshing in its coloring yet extremely balanced in composition, the oil is a "tightly constructed yet lyrical scene" according to Katherine Kaplan. It also displays a strong emotional intensity, which echoes the artist's own lifelong feelings towards France "and all things French." This feeling is accentuated when we compare the work to A Promenade (Detroit Museum of Arts), which similarly depicts a young child, the artist's daughter Lenna, on a donkey riding through town. While the composition is tighter, and can be analyzed as a portrait more than a landscape, both works offer a tender vision of summer and family bliss which delight the eye as much as the heart of anyone looking at it.