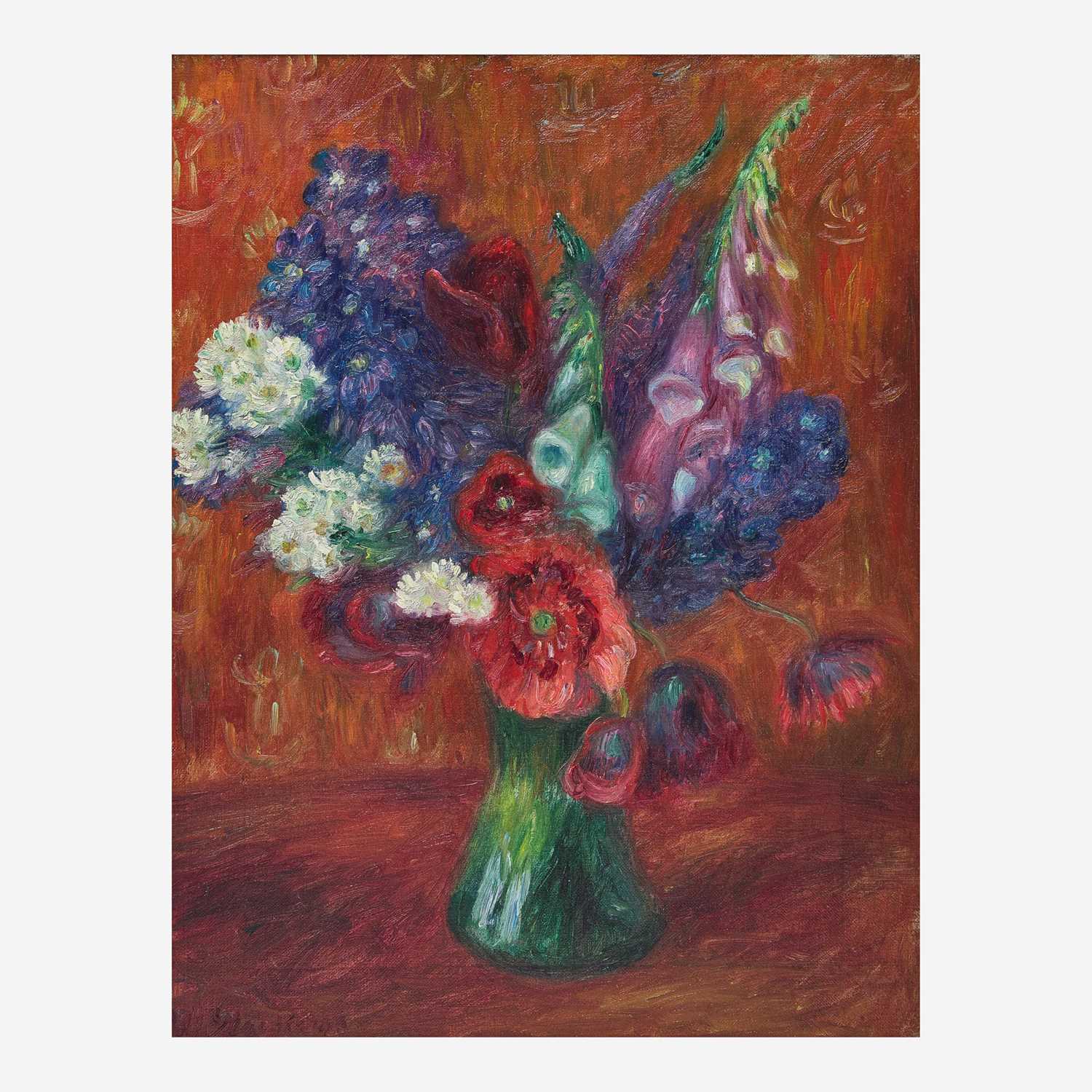 The Artist.
The Estate of the Artist.
Kraushaar Galleries Inc., New York, New York.
Acquired directly from the above in 1983.
Collection of Mr. and Mrs. Arnold and Sandy Rifkin, Wilkes-Barre, Pennsylvania.

The Artist.
The Estate of the Artist.
Kraushaar Galleries Inc., New York, New York.
Acquired directly from the above in 1983.
Collection of Mr. and Mrs. Arnold and Sandy Rifkin, Wilkes-Barre, Pennsylvania.

Although he gained a solid reputation for his genre, figure and street scenes, William Glackens became increasingly attracted to the infinite possibilities which still life painting offered to him, especially the floral compositions, which became the most abundant subject matter of his late years, as exemplified by the present Lot - a lavish and colorful bouquet captured in a crimson harmony. The genre itself gained prominence amongst American artists of the 1920s who used it as a(n innocent) way to introduce modernism into their work. For Glackens, still lifes represented another consequence of Pierre-Auguste Renoir's growing influence on him, as the French Master also dedicated his later years to painting flowers in his Estate of Les Collettes in the south of France.

Flowers had already appeared in Glackens' earlier works, as part of larger compositions such as Chez Mouquin (Art Institute of Chicago) or Lenna and Imp (James A. Michener Museum of Art), but it was not until the early teens that the artist started to conceive them as the sole subject of a painting. As exemplified by the present work, Glackens' still life compositions appear rather simple, somehow casual. Here, we see a haphazard bunch of picked foxgloves, poppies and mums tightly arranged in cluster inside an elegant green vessel placed on a table, and against an undefined, yet textured, background. For Glackens, the bouquet is a pretext to showcase his newfound loosened style made of a fluid, vigorous and thick impasto, here revealed in the differences of flower types, colors, textures and shapes, all enhanced by the monochromatic vase and the suggested decorative patterns in the background, vaguely remindful of Matisse's similar interior scenes. While the motion of the stems and flowers impose a dynamism to the work, the vivid colors and swift paint brush strokes - suggesting the curve of the petals and oval of the table - contribute to the vivacity and modernity of the painting.