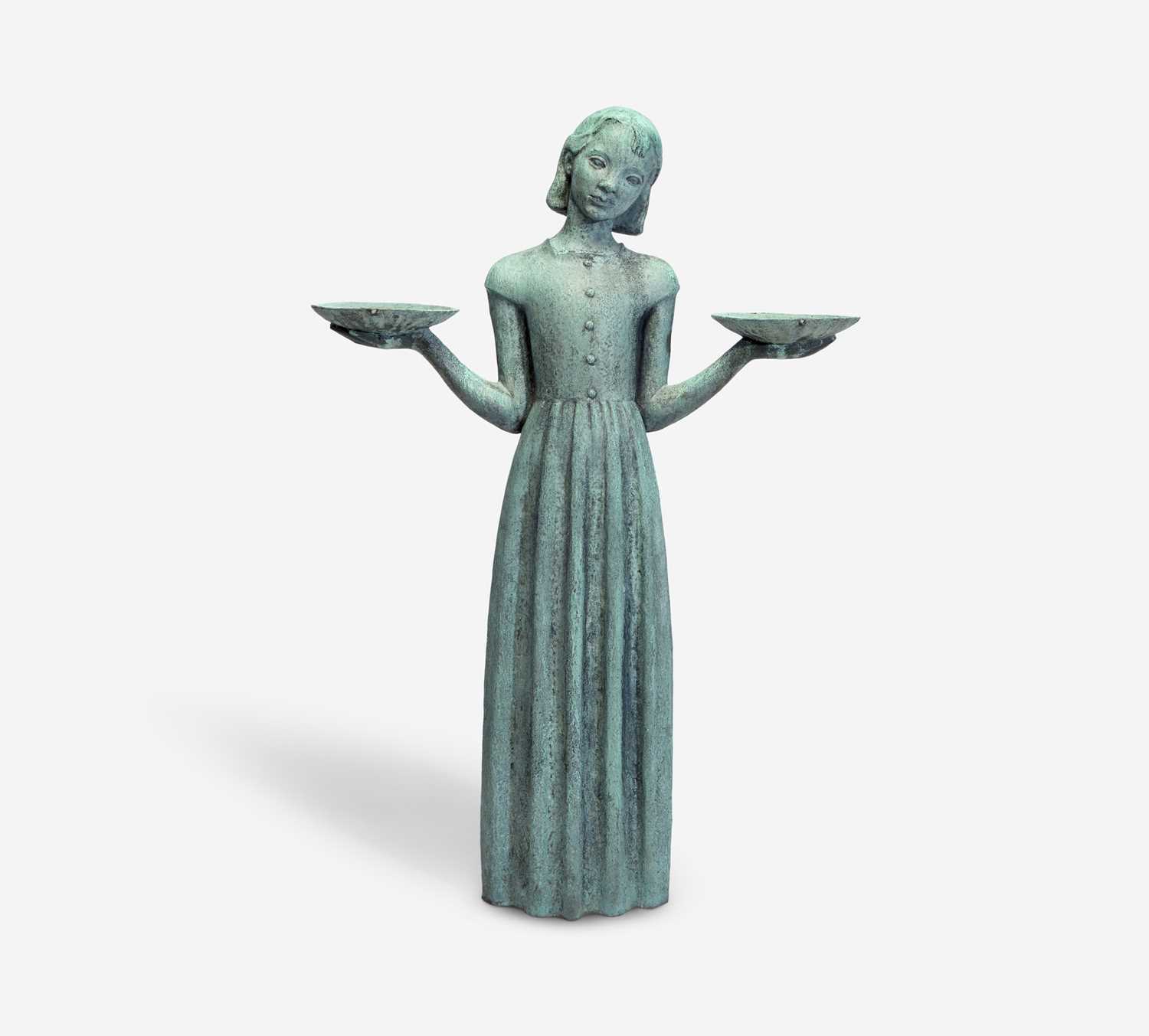 It is arguably one of the most recognizable sculptures in the history of American Art. Everyone knows her: the silhouette of a slender girl dressed in a full length buttoned dress, holding a pair of shallow bowls in outstretched arms - like the figure of Justice herself. It is Bird Girl, the famed life-size statue of a nine-year old girl forever associated with John Berendt’s 1994 best-seller Midnight in the Garden of Good and Evil, and Clint Eastwood’s subsequent 1997 movie.

The sculpture was conceived in 1936 by Chicago artist Sylvia Shaw Judson, who at the time was mostly known for her Little Gardner, a version of which exists at the White House and the Monument to the Quaker Martyr Mary Dyer at Boston’s State House. It was sculpted in Ragdale, the artist’s family retreat home in Lake Forest, Illinois. Only four bronzes were made from the original plaster cast (one version in lead predating the bronzes also exists, as well as two additional posthumous casts, not considered as originals). The most famous statue was completed last, and bought by the Trosdal family from Savannah, Georgia, who renamed it “Little Wendy” as she presided over the family burial plot in the Bonaventure Cemetery. There, “and although she was quite unlike the other funeral monuments in this place, she settled in and took her duties quite seriously” says Sandra L. Underwood, judging from the girl’s contemplative, gracefully tilted gaze. The statue stood unnoticed in the cemetery until 1993, when Random House hired Savannah-based photographer Jack Leigh (now buried at Bonaventure) to shoot the cover of John Berendt’s new non-fiction book. Leigh found the sculpture on the Trosdal’s burial plot at the end of his second day of research, as dusk was settling in. The magic happened ten hours later in the darkroom, where he gave the photo a crepuscular feel by accentuating the halo around the statue’s head, enveloping it with the perfect mix of light, shadow and darkness. The cover image was an instant success – a true symbol of the Deep South – and Berendt called it "one of the strongest book covers I've ever seen". The book became an all-time bestseller, and soon visitors began to flock to Bonaventure Cemetery to see the sculpture. Due to rising concerns about the increasing number of people visiting the grave site each day, the Trosdal family had it removed from the cemetery and later lent it to the Telfair Museums in Savannah, for public display in their Telfair Academy Building.

Our version of Bird Girl was the second bronze Judson made at the Roman Bronze Works in New York City. It is the twin version of the original bronze sculpture, directly commissioned from the artist by Mr. and Mrs. Edward L. Ryerson as a garden statue for their summer home in Marion, Massachusetts. Because the original sculpture was to be kept in a private collection, the present bronze was specially made for the exhibition circuit, as a promotional tool for Judson to showcase her talent. Alternatively titled Standing Figure, Fountain Figure or Peasant Girl, the sculpture was featured as Girl with Bowls in Judson’s first one-person show at the Art Institute of Chicago between July-October 1938. It later joined a Circuit Exhibition and started to tour across five museums in the Midwest (Milwaukee, Wisconsin; Indianapolis, Indiana; Flint, Michigan; Dayton, Ohio; and Zanesville, Ohio). In April 1939, while on display at the Dayton Art Institute, the director of the Dayton Art Institute received a letter from a certain Mrs. Davidson of Washington D.C, inquiring about the work. At her pressing request, the sculpture was shipped to her house at the end of the show, before its inclusion in the fifth and last leg of its tour in Zanesville. Ultimately, the sculpture was inherited by a daughter of Mrs. Davidson, who took her to her home in Reading, PA - where she has remained until this day.

Historically, Bird Girl was conceived by Judson as a garden sculpture, and our own version was always used as such by its owners, judging from its beautiful verdigris patina.The shallow bowls extended in each of her palms were intended to hold either water or food for the birds. The sculpture could also have been conceived so that it could operate as a fountain, judging from the narrow slots at the front of the bowls which would allow water to slowly spill out. However, there are no records of either sculpture being used as such. Contrary to other sculptors who exhibited widely and through certified galleries across the country, Judson achieved her reputation by herself, solely by making garden sculptures. Her success earned her respect, but not much publicity since gardens were, by essence, private places that few could visit. Judson’s sculptures were also so successful among her patrons that her work, almost without exception, came into a family and remained there without ever appearing on the primary or secondary market, such as the present work.

In order to complete Bird Girl, Judson felt she needed a model, and she indeed found one in nine year-old Lorraine Greenman, who Judson discovered in a dance class in Chicago. The artist was interested in the child because she was well proportioned. The thin, blonde and blue-eyed girl also had a pleasing face with soft features, a tender smile, which Shaw would turn into an anonymous, immortal image of youth. As Sandra Underwood sums it up: “Bird Girl is as Judson hoped she would be, a good sculpture, carefully composed, well made, and well suited for life in a garden. A figure that stands solid and quietly, a strong and simple form. A surface that catches light and invites touch (…) A human presence in a human scale (a child, child-size). And a serene spirit that offers us in this troubled age the tranquility we find too seldom.”