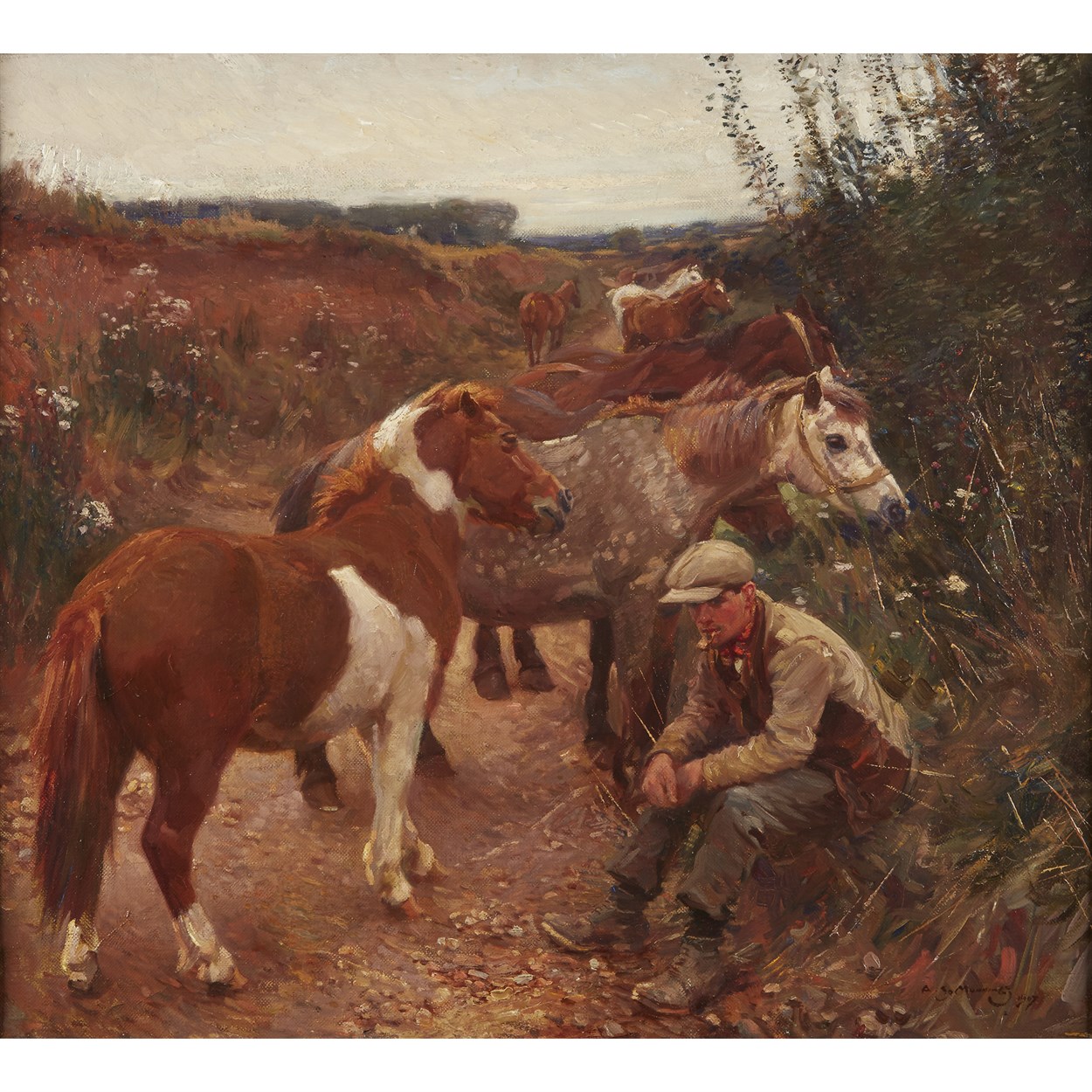 "Alfred J. Munnings: Images of the Turf and Field," A Loan Exhibition For the Benefit of The Jockey Club Research Foundation, Wildenstein, New York, New York, April 28-June 3, 1983, no. 5 (illustrated in the exhibition catalogue).

We wish to thank Ms. Jenny Hand at the Munnings Art Museum in Dedham, United Kingdom, for her kind assistance in cataloguing this lot.

Starting in 1907, Munnings went on extended painting expeditions from his home in Mendham to the Norfolk region, making his headquarters in Costessey, near Swainsthorpe. As the artist recalls, "Ringland and Costessey, on the west side of Norwich, are situated in one of the loveliest districts of all the pleasant country surrounding that old city. Although only six to eight miles away, with little perceptible variation, their serenity was unbroken, their peace continuous and unalloyed, the inhabitants living on in the same unaltered ways of life, toiling and resting, their quietude as yet undisturbed by motor-horn or sound of tractor" (quoted in A.J. Munnings, An Artist's Life, 1950, p. 208).

The present work was painted in the Ringland Hills. Dated 1907, it is one of the earliest compositions of the Ringland series, which Munnings continued to explore until 1911. The Ringland Hills, with their untouched lands and spectacular views towards the distant wooded parklands, had everything that appealed to Munnings. There, in complete harmony with nature, he confessed "Nobody cared and I was at peace" (op. cit., pp. 217-18). His love for the region was not entirely due to the landscape. Munnings knew that horse dealers, gypsies with their ponies and lurchers were all easily found at the fairs and public houses in the area, hence providing him with formidable subjects.

Here, the artist depicts a moment of respite in the hills, where a lad is allowing himself a short break to smoke his pipe, while the horses graze along the path. The scene conveys a sense of stillness, which is most likely due to the languor and fatigue the subjects are feeling. It is also enhanced by the very carefully applied touches of paint on the canvas, which differ from later compositions of 1909-1911, which are more loosely worked. This probably signifies that the present work was most likely considered in advance, and executed in the artist's studio rather than en plein-air. The ponies depicted here are known as Irish ponies. Strong animals known for their endurance, they varied in colour, the main type being the skewbald, as depicted in the foreground, with its white and tan colors. Such horses would have been trained to pull gypsy wagons, a theme which was dear to Munnings, who explored the various regions of England in a cart, along with his beloved gypsy boy, Shrimp.
Shrimp, né Fountain George Page, was a gypsy horse handler aptly nicknamed for his small stature. He was introduced to Munnings by horse dealer James Drake. Though the two men had an often combative relationship, they eventually became friends over their shared love of animals, including ponies. Rapidly, the gypsy would become an indispensable model for the artist, who recalled: "Shrimp was a good lad, a son of the wild. He could neither read nor write, and had no need of either. The best model I ever had" (op. cit., p. 207). Shrimp prominently appeared in a number of Munnings' compositions from 1908 through 1912. If the sitter in this painting is in fact Shrimp, it is one of the earliest portrayals of the gypsy model as Munnings first met him in September of 1907. However, and even if the clothes match the exact description of Shrimp's usual uniform (a tight pair of 'dealer' trousers, a pearl-buttoned Georgian waistcoat, a cloth cap, and a bright red neckerchief), the figure appears older and should probably be taken for George Curzon, Munnings's groom during his years at Swainsthorpe. Munnings employed Curzon during his years at Church Farm. The boy posed for a series of paintings, including hunting pictures. According to the artist, "George Curzon was the high-sounding name of my new groom at Swainsthorpe. Never was a master, calling himself an artist, better understood or served. Winter mornings and afternoons passed as, dressed in scarlet he posed on a horse" (op. cit., p. 195).

A subtle, golden-brown painting, Irish Ponies on a Grassy Lane contrasts with the bright and sunny pictures that Munnings made in the same spot, including Shrimp on a White Welsh Pony in 1911 and Ponies in a Sandpit, Ringland Hills (both in the Sir Alfred Munnings Art Museum in Dedham, United Kingdom). As the artist explains in his autobiography, "the summer when I painted this picture in 1907 was not too fine. A glorious September helped me to complete what I had begun," hence the fall-like golden brow hues in this work. Here, George's earth-toned clothes blend into the surroundings, making him an integral part of the sun-filled scene. The warm pinks of his skin are echoed in the sunlit graveled path ahead of us, while the brown highlights on the pony in the foreground complement the tones in the top line of George's jacket, immersing the figures in the serene setting. Munnings accentuates this idea of intense harmony by implementing a circular reading of the painting, inviting the spectator to look from left to right - from the skewbald in the foreground, to the row of aligned Irish horses in the background (the key to the work's perspective), coming back to George in the foreground. What also appears striking in this painting is the detail and the sense of care and attention it seems to contain. Stylistically speaking, it is very similar to other examples of Munnings' work executed between 1900 and 1905, such as The Timber Gill (Munnings Art Museum), making it one of the most achieved compositions of the Ringland series.

Such works greatly impacted the artist, and when contacted later in his career by a London dealer about another "picture of a lad with ponies in a grassy lane," Munnings vividly recalled his blessed-time in the Ringland Hills: "the long-buried past flashed back as clearly as though it were only yesterday (...) When looking at it, the slumbering cells of memory are so stirred that I recall the painting of every passage in it. The calm, grey sky, the grass banks, not a leaf stirring in the fence; the ponies, the lad in the foreground (...) I wonder if the [collector] who owns that humble effort will ever read my story" (op. cit., p. 207).