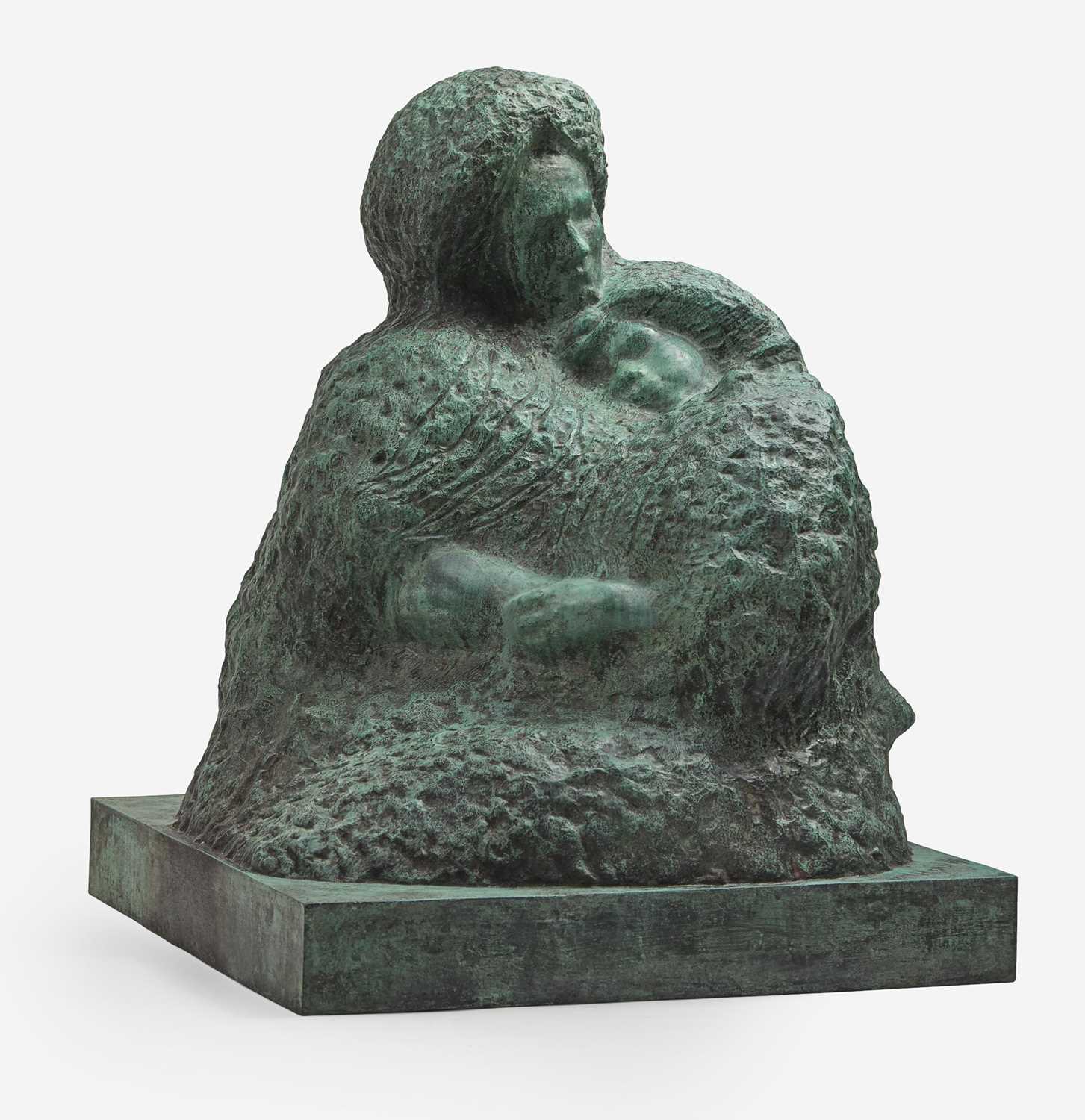 Musée Rodin, Paris.
Commissionned directly from the above.
Collection of Mr. and Mrs. Thomas Merrill, Minnesota and Virginia.
By descent in the family.
Private Collection, Virginia.

Musée Rodin, Paris.
Commissionned directly from the above.
Collection of Mr. and Mrs. Thomas Merrill, Minnesota and Virginia.
By descent in the family.
Private Collection, Virginia.

Although he never visited the United States during his lifetime, Auguste Rodin enjoyed a vast following among wealthy American collectors and patrons longing for cultural sophistication, to the eyes of whom the French sculptor represented a standard in Modern Art. As Ruth Butler states “on both sides there was fascination and affection, though neither was burdened by deep understanding.” Having worked with many American clients in the past such as Kate Simpson or la Marquise de Choiseul (born into a prominent New York family despite the French sounding name), it was therefore no surprise for Rodin to receive a letter from Mrs. Elizabeth Merrill of Duluth, MN in February 1908.

Well connected and deeply cultured socialites, Mrs. and Mrs. Thomas Merrill were surely among Rodin’s foremost admirers across the Atlantic. Born in 1855, Thomas D. Merrill was the son of a Michigan lumberman who, like many other lumber barons, had holdings stretching from Michigan to Washington State. While the head of his father’s mill factory, Merrill moved to Duluth, Minnesota— “The Zenith City of the Unsalted Seas”— along with his new bride, New Yorker Elizabeth Musgrave, the widow of former Michigan Governor Charles Croswell who died in 1886, three months before the birth of their only daughter, Sally Hicks Croswell. Together, they lived "in an old-fashioned house with turrets, towers and greenhouses overlooking" the north shore of Lake Superior.

While at first Mrs. Merrill and her husband tried to persuade Rodin to create a monument to the Chevalier Duluth, a Frenchman who gave his name to the Minnesotan town, the correspondence gradually shifted towards more personal commissions when it became clear that the first project would never be completed. Soon, Mrs. Merrill ordered two works for herself. The first one, a memorial relief based on a cast of the hand of Mrs. Merrill’s daughter, Sally, born from a first marriage to former Governor of Michigan Charles Croswell, can be seen at the National Gallery of Art in Washington, D.C. The second commission would differ in scale and meaning. As Butler explains, this project meant a great deal to Mrs. Merrill: “She wrote to Rodin to describe exactly what she wanted her commission to be. Perhaps she had been afraid to say what she wanted face to face.”

Mrs. Merrill requested a marble group meant “to reproduce and to make immortal [her] resemblance and that of [her] much loved child” (…) “in memory of the happy days” following Sally’s tragic death at 17 in 1904. Having never seen the daughter, Rodin worked from several photographs of the child that her mother had sent him, a rather new process for the artist who usually worked with models. One image in particular, showing Sally at age 6, was the main inspiration for the sculpture. “It is this photograph of us two together, as we were then, that I would like to see reproduced (…) We both liked this image very much and always carried a copy of it anywhere we went” explained Mrs. Merrill to Rodin.

While many patrons had criticized Rodin for his lack of concern for the resemblance between his model and his sculpture, Mère et Fille Mourante was not conceived as a realistic portrait of two figures, but as a symbol, an allegorical representation of the loving bond between a mother and her child. Mère et Fille Mourante is in fact part of the long standing tradition to possess a portrait of a loved-one as a way of remembering them, and keeping their memory alive. Rodin himself was no stranger to creating posthumous portraits, both out of public and private commissions, as shown by his famous renditions of Gustav Mahler, Honoré de Balzac, Victor Hugo and even Charles Baudelaire. The challenge for the sculptor, therefore was less about creating a faithful likeness of the person (as one would do in a death mask, for example), but more aimed at offering a vision of who the deceased was.

Here, the small child is cradled in her mother’s embracing arms. Only the faces and the mother’s wrapping arms are visible, all shown emerging from a mass of roughly polished rock. This rest of the composition (clothes, hair, bodies) is enveloped in an indistinct, roughened, non-figurative surface. Incised in places to suggest folds in the dresses, chiseled on the bottom of the block, and irregularly polished to the left, it seems to unite the mother and the child in a fusion, a sort of whirling fog that conveys the force, and the transcendentality of maternal love. This flou artistique was very much wanted by Rodin (despite critics) who embraced this non-finito aesthetic in many of his works from 1910s, so as to show his artistic process, and to record the unfinished, transitory state – a direct homage to Michelangelo’s haunting, and mysteriously charming sculpture (see for example his numerous examples of carved Slaves from 1520s). In this particular case, the ruggedness of the block might also be a symbol of the mourning and the longing for the deceased child, shown engulfed in the mass. Contrary to the marble version, which reveals more of the details, the bronze smoothens the surfaces into a sfumato, which strengthens the idea of contemplation and detachment. Historically, the rugged block was also analyzed as an homage Rodin paid to his dear friend, French painter Eugène Carrière. The group is indeed very reminiscent of the artist’s hazy touch in his famous Tendresse, a 1905 canvas depicting a mother and her child in a loving embrace, which Rodin greatly admired and fought hard to be bought by the French state after Carrière’s passing in 1908 (the painting is now at Musée d’Orsay, Paris).

When presented with the final version in marble, Mrs. Merrill reportedly said: “My dream of making my child immortal has finally come true.” For some unknown reason however, the marble was never sent to the Merrills and lingered in Rodin’s studio for a while. In 1916, the group became part of Auguste Rodin’s historic donation to the French Republic, which would form the basis of the creation of the Musée Rodin. Understandably disappointed as they had already paid for the marble group, the family had to settle on an agreement with the Museum some ten years later: while the marble group would stay in Paris, two special versions in bronze would be made for and sent to the family in the United States, along with the promise that no other reproduction or copy would ever be made (to that end, the original cast was destroyed). The present work is one of the two versions made. Sadly, Mrs. Merrill died in 1928 before having the chance to see Rodin’s monumental bronze. The sculpture has remained in the Merrill family since. First installed in the family’s Estate, Waverly Farm, in Virginia, where it remained for nearly half a century, it was then transferred to Middleburg Cemetery in the 1980s, where the Merrill descendants chose to present it as a memorial sculpture.

The presentation of this poignant bronze at Freeman’s marks an important milestone in the work’s history, Philadelphia being a city forever associated with the French sculptor as its own Rodin Museum, opened in 1929, is the sole museum in the United States dedicated exclusively to works by the artist.