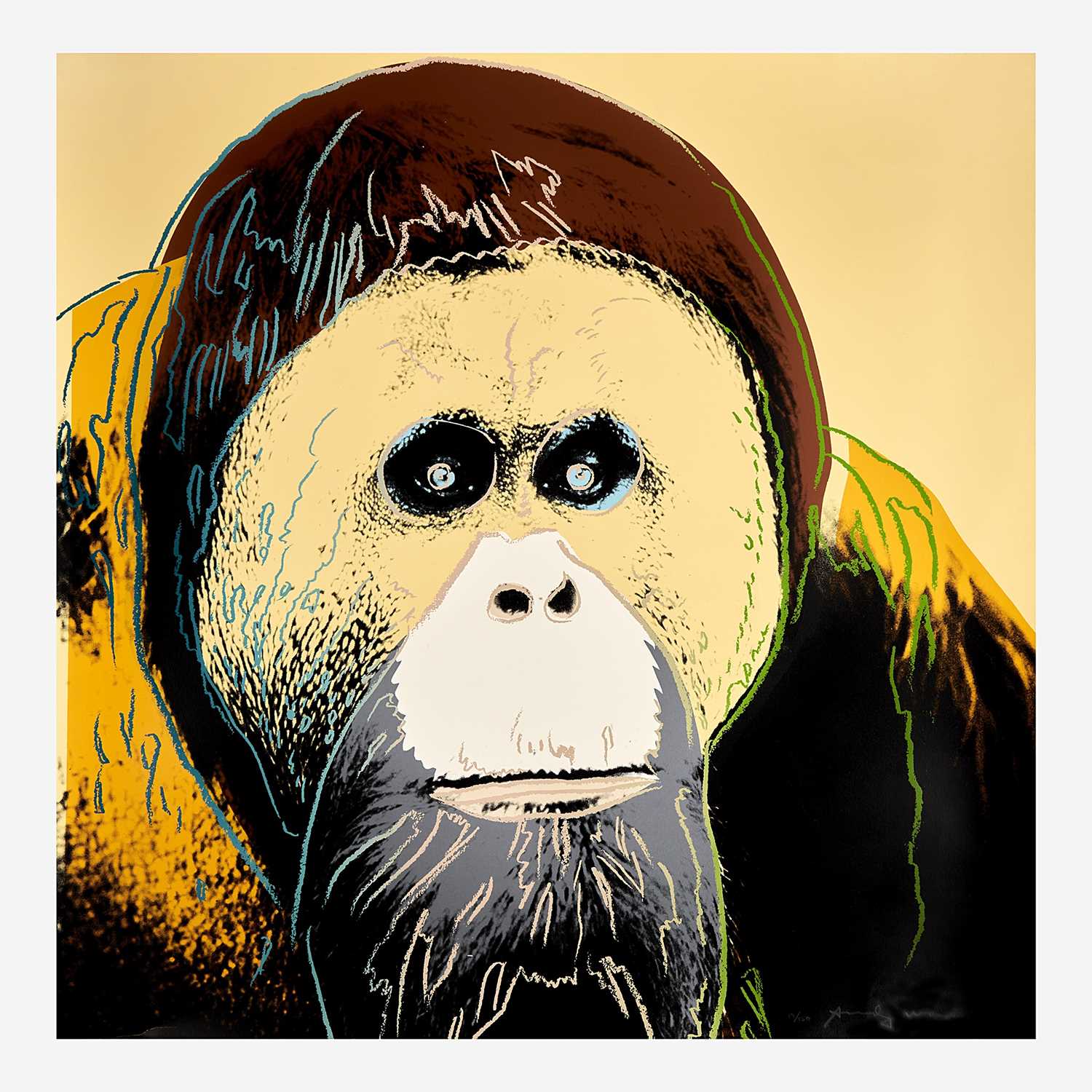 1983, pencil signed and numbered 19/150 (there were also 30 artist's proofs), the full sheet, Rupert Jasen Smith, New York, printer and with their blindstamp, and Ronald Feldman Fine Arts, Inc., New York, publisher and with the artist's copyright inkstamp verso. Screenprint on Lenox Museum board.

1983, pencil signed and numbered 19/150 (there were also 30 artist's proofs), the full sheet, Rupert Jasen Smith, New York, printer and with their blindstamp, and Ronald Feldman Fine Arts, Inc., New York, publisher and with the artist's copyright inkstamp verso. Screenprint on Lenox Museum board.

Born Andy Warhola in Pittsburgh -- home of the eponymous museum -- Andy Warhol was arguably the leading exponent of Pop Art, a movement described by British artist Richard Hamilton as “popular, transient, low cost, mass-produced, young, witty, sexy, gimmicky, glamorous, big business.” Produced with the aid of assistants in “The Factory,” an environment that enabled Warhol to liken his art production to the production of household goods, Warhol’s art was a celebration of American commercial culture. His preferred medium was screenprinting, and featured subjects as varied as Campbell’s soup cans, Coca-Cola bottles, Brillo pads, Marilyn Monroe, and Elvis Presley. In the process of elevating “popular culture to fine art status,” Warhol himself became an icon, rising to spectacular heights of fame and celebrity. No artist before Warhol had so successfully blurred the lines between art and commercialism; as Warhol himself said, “Making money is art and working is art and good business is the best art.”

Freeman’s has sold hundreds of Andy Warhol prints for consignors in recent years, including over forty in the 2019 sale of the Robert J. Morrison Collection. The sale included many iterations of the artist’s Marilyn Monroe, Elizabeth Taylor, Mao, and Campbell’s soup can invitations, signed posters, and prints. The collection, assembled over thirty years of passionate collecting, was 100% sold and saw spirited bidding from private collectors and advisors around the globe. Individual prints, drawings, and books have also consistently fetched top prices, including Chanel from Ads, which sold for $175,000 in 2020, Grace Kelly, which achieved $112,000 in 2018, or a unique trial proof for San Francisco Silverspot, which brought $100,000 in 2018.

Freeman’s, Philadelphia’s auction house, has long served as a premier steward of the works of Andy Warhol, a Philadelphia institution in his own right. Warhol had a strong and lasting connection to the city; the artist’s first solo museum show was held at the Institute of Contemporary Art (then located in Fisher Fine Arts Library on the University of Pennsylvania’s campus). Years later, he published his 1984 screenprint Grace Kelly in homage to the actress, who hailed from Philadelphia, as a benefit print for the ICA.