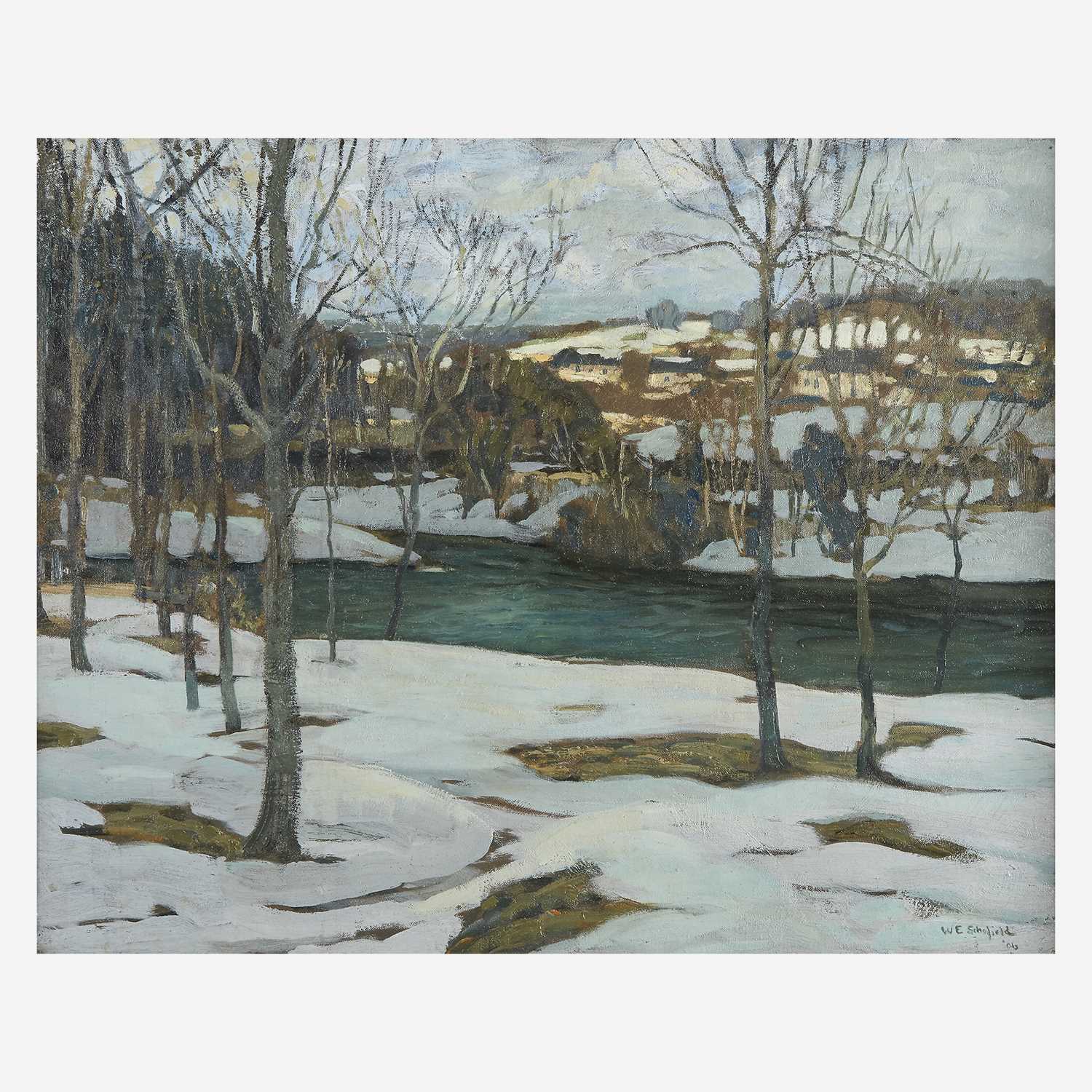 The Artist.
By descent in the Schofield family.
Cheffins, Cambridge, sale of March 7, 2013, lot 453.
Acquired directly from the above sale.
Private Collection, Connecticut.

The Artist.
By descent in the Schofield family.
Cheffins, Cambridge, sale of March 7, 2013, lot 453.
Acquired directly from the above sale.
Private Collection, Connecticut.

Walter Schofield may have been the most international of all the Pennsylvania Impressionists. Born in Philadelphia in 1867, he studied at the Pennsylvania Academy of the Fine Arts from 1889 to 1892, and spent most of his life between two continents: while he would record the frosty and picturesque winters in the Delaware Valley from April to October, he would spend his summers in England, specifically Cornwall, where he painted the quaint hamlets he is known for today. The stately manor he stayed at, Godolphin, also provided a desirable subject throughout the years.

The following two works illustrate the versatility of the artist, who could depict the changing effects of light on the landscape no matter the season, whether it was a shaded brook in Pennsylvania, or the rugged shore of Maine, where he was also frequently painting. One can sense the similarity between Schofield's bold and vigorous style in each painting and that of Redfield, the Father of Pennsylvania Impressionsm. If the two started off as close friends, often painting near each other, Schofield's exploration of the plein air motif, which he would translate on large-size canvas irritated Redfield, who considered his touch unique, and caused a schism between the two artists.

Painted in 1906, River in Snow recalls Schofield's first real success from 1899, Winter (now at the Pennsylvania Academy of the Fine Arts). It is a typical early snow scene, with a quiet and intimate mood reminiscent of paintings of icebound pools by John Henry Twachtman. As such, it appears more Tonalist in execution than Impressionistic, as exemplified by the soft, silvery hues used to depict the ice-cold river. Contrary to Winter however, Schofield introduces a perspective to his painting by inserting the view of a nearby village in the distance, which enables the painting to breathe and open-up. The work was most likely painted in Pennsylvania, outdoors, and as pays homage to Redfield, who also liked to depict such close-up views of streams in the forest, not too far from the nearest village often represented in one of the corners of the canvas.

Rocks and Sea, Chebeague Island, Maine is another strong example of Schofiel's talent, and uses many of the compositional tools the artist used in his Cornish paintings. Both locales shared the same ruggedness, which appealed greatly to Schofield. Without any architecture in sight, simply rocks, surf and weed, Schofield immortalizes a vision of nature freed from mankind - a trait often visible in his paintings, which are usually devoid of any human figures. Such a coast scene offers a dramatic spectacle; that of massive rock formations wrestling against the powerful, pounding waves.