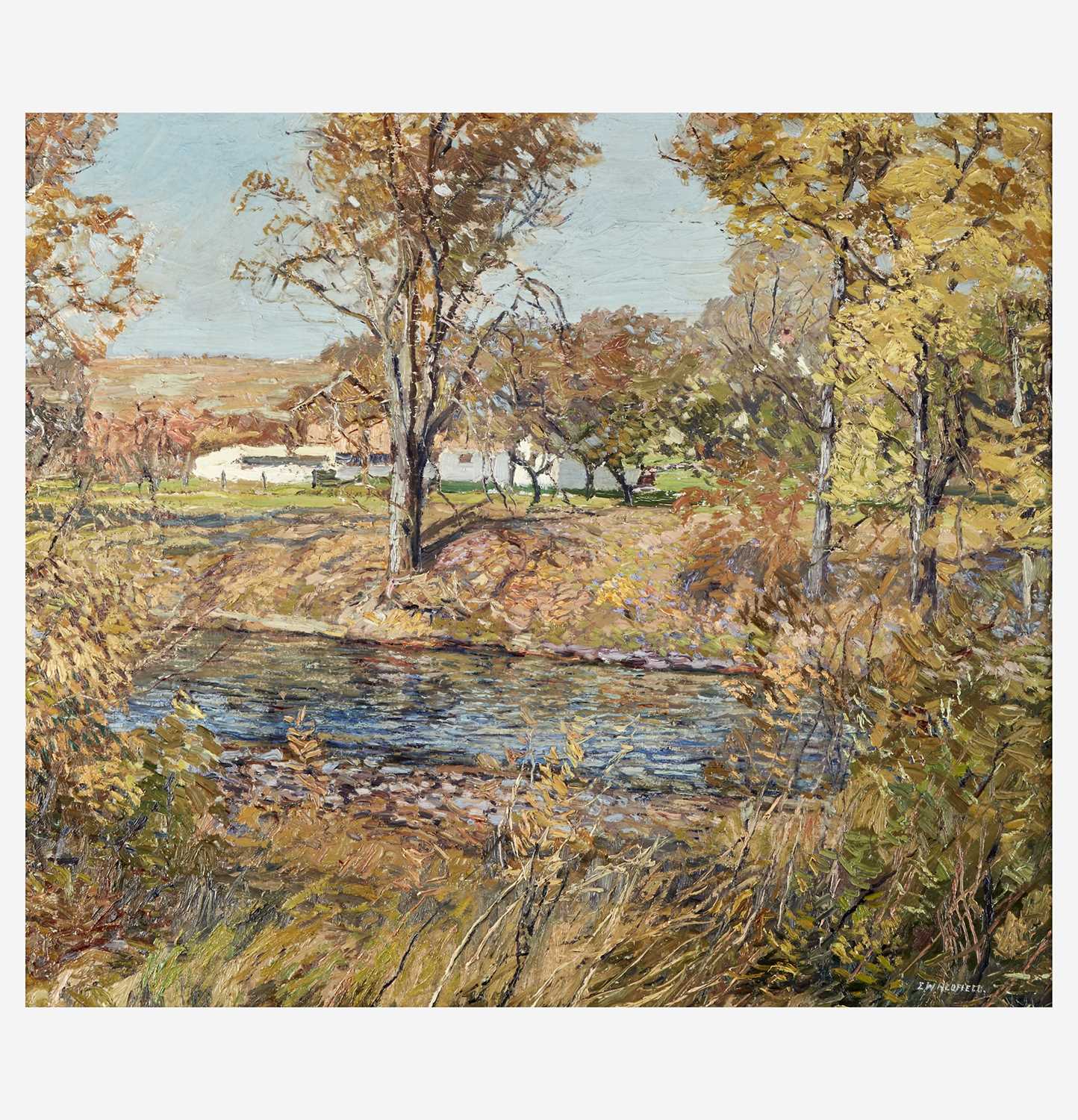 The present work will be included in the forthcoming Catalogue Raisonné of Edward Redfield's work, compiled by Dr. Thomas C. Folk.

In the summer of 1898, Edward Redfield and his wife moved from Glenside, Pennsylvania to the rural village of Centre Bridge, just five miles north of New Hope. There, the Redfields bought a 127-acre strip of land beside the two path of the canal, overlooking the beautiful Delaware River. The farm, formerly used as a stable for mules, was situated on an island, in between the river bank and the canal. It is this house, the artist's first, that the present painting depicts. Redfield and his family stayed in the house until 1931, and it remained an important source of inspiration for the artist, who painted it several times in all four seasons, as exemplified by December, which shows the farm covered in snow, sitting tranquil by the frozen river.

Redfield chose the house “not for the beauty of the countryside, but because this was a place where an independent, self-sufficient man could make a living from the land, bring up a family and still have the freedom to paint as he saw fit.” The relocation fitted Redfield's vision of manhood, mostly channeled by Henry David Thoreau, and yearning for a life of hard work and complete harmony with nature. In fact, Redfield was no different than most city dwellers who, in time of economic crises, traded life in a big, fuming city for a simpler, more peaceful existence in the back country. Redfield's house was furnished chiefly from the nearby driftwood and seasoned timber, and which he used to make tables, chairs and chests. As journalist Walter Dyer put it in a 1907 article specifically devoted to Redfield's presence in Centre Bridge, Redfield "made a dry and comfortable house of it, if not an elegant one." He concluded by giving credit to Redfield, ackowledging the simple way of life in the countryside provided an ideal environment for the full and authentic expression of one's self: "The Country called them and they went forth not knowing what the outcome would be. They have blazed the trail for those who follow. They have taught us one more lesson in the gospel of the simple life."

Redfield's life in the country strenghtened his character (each season was a new battle against the elements to keep the house in shape), but also deepened his respect for nature. In the present work, the house is barely noticeable: it is in complete harmony with its sourroundings, camouflaged behind the colorful leaves and vines of a full and lush autumn. It mirrors Redfield's attitude towards nature: secluded, fully immersed and waiting to be noticed.

Born in Delaware in 1869, Edward Willis Redfield went on to become one of the most celebrated Pennsylvania Impressionists of his time, joining the ranks of such peers as Daniel Garber and Fern Isabel Coppedge. At the Pennsylvania Academy of the Fine Arts, Redfield studied under Thomas Anshutz and Thomas Hovenden and refined his natural talent. Redfield also spent time in France in the 1890s, where he continued his studies and met his wife; the two of them returned to the United States in 1898 and settled inCentre Bridge, Pennsylvania, where Redfield was to become one of the founders of the artist colony at New Hope.As Philadelphia’s auction house, Freeman’s boasts ongoing strong successes in the sale of Pennsylvania Impressionists, particularly the work ofEdward Willis Redfield. His snowy scene Winter Sunlightmore than doubled its pre-sale high estimate to achieve a remarkable $710,500 in 2014, underscoring market demand for Redfield’s work. Other winter scenes have achieved strong prices, including The Briar Patch, which sold for $629,000 in 2004, and Home By the River, which sold for $605,000 in 2005. A scene depicting New Hope itself, Washington’s Birthday, New Hope, brought $485,000 in 2005.Redfield built his reputation by painting powerful landscapes, which he executed almost exclusively en plein air. He would often brave the elements, rapidly executing his paintings straight onto the canvas with assertive, long, thick brushstrokes that mirrored the artist’s rugged personality. Redfield’s purchase of the farm in Centre Bridge in 1898 enabled him to study unique viewpoints and differentiate his scenes from typical Hudson River views or classical European landscapes. Well-versed in large-scale winter scenes, he often revisited his subject throughout his career, always paying close attention to light and color in order to best capture the beauty and subtleties of the snow-covered Pennsylvania countryside. Redfield ultimately ended his painting career twelve years before his death in 1965, but his legacy asa foundational Pennsylvania Impressionist lives on; his work is featured in the collections of major museums, including the Metropolitan Museum of Art and the Smithsonian American Art Museum.