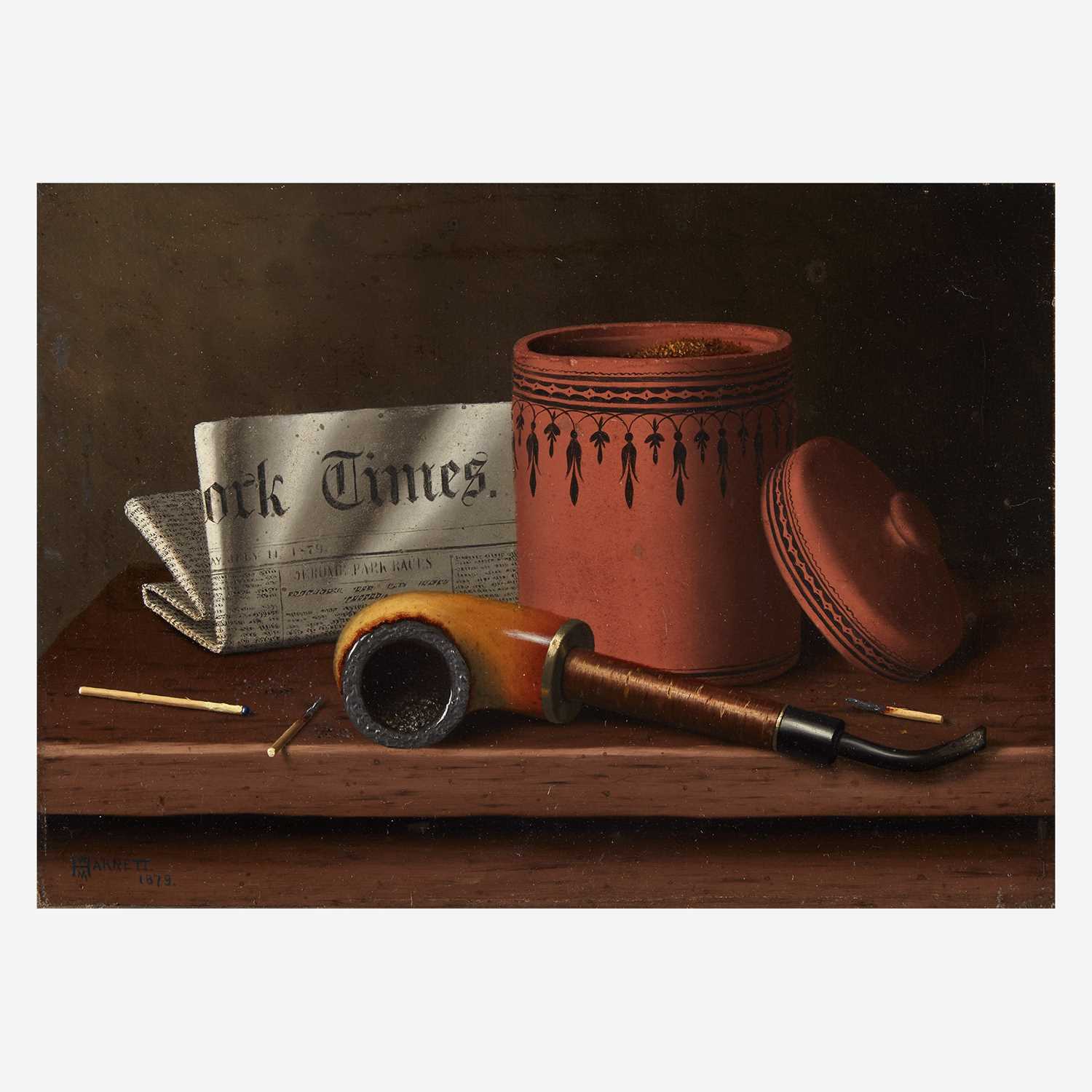 William Harnett is mostly known for his trompe l'oeil still-lifes, often featuring trophy hunts, pistols, tankards, music sheets, instruments and all sorts of ordinary, everyday items. An undisputed champion of illusionism, he perfected his meticulous style at the Pennsylvania Academy of the Fine Arts, where he studied 17th Century Old Masters, in addition to discovering the art of Raphaelle Peale.

In January 1880, Harnett sailed to Europe and stayed in Munich between 1881 and 1886, as revealed by the artist's signature of Lot 8. While on the Old Continent, his painting took a new, drastic turn. The artist famously went on to produce a series of extremely small canvases marked by a freer technique, and a deft, miniaturistic, almost microscopic touch. His new style culminated in a series of eleven recorded horizontal still-lifes, all involving a tabletop with a gray stoneware jug or beer stein at the right, a Meerschaum pipe laid flat, a book and a folded, dated, newspaper.

Larger in size and looser in technique (judging from the beautifully textured edges of the pipe at center), the present lot evidently predates Harnett's series of small canvases. It was most likely executed in the United States, just before the artist embarked on his European journey, and therefore provides an insightful perspective into the artist's technical evolution. The still-life channels hallmarks of Harnett's known, earlier oeuvre, and yet also touches on a new burgeonning style. In the foreground stands a wooden table-top, with edges parallel to the picture plane - a trait typical of Harnett and unlike the non-illusionistic painters, who preferred to introduce tables at an angle so as to lead the viewer's eye into deep space. On it, one can spot a yellow pipe, tobacco jar and burnt matches - all recurring props in Harnett's compositions. However, the artist introduces a new, bold and dramatic element to his sill life at upper left: a folded copy of the New York Times. Dated July 11, 1879, the cover features the Jerome Park Racetrack, an American thoroughbred horse racing facility in Westchester County, New York.

The presence of a dated newspaper is meant to reinforce the illusion of reality, and ground the picture in a known, relatable and realistic dimension. Here however, the folded newspaper paradoxically conveys a sense of timelesness, especially in regards to the abstract, neutral dark green/black backdrop. This atmosphere is typical of Harnett's pre-1880 canvases. It gives the picture space a definite, shallow limit, enabling the viewer's eye to focus on the table-top in the foreground, and not be distracted by a "noisy" background. In short, it enhances the effect of trompe l'oeil. In his later canvases, Harnett will abandon this neutrality to render a meticulously-rendered background, alternatively draped by a piece of cloth, or fully carved and decorated. It is as if the artist drifted away from timelesness, and instead wished to capture time through a specific decor forever immortalized on the picture place.

When comparing the present work to later examples, one also notices a newfound attention to space and volume, which will continue to preoccupy Harnett later on. Here, for one of the first times in his career, the artist introduces a deep, dark recess on the right-hand side of the still-life, which helps the tobocco jar to dramatically stand out in the composition (it is the only true vertical of the painting). Harnett also chose to fully reveal the left-hand corner of the table-top, which was rarely, if not ever the case before. Not only does it help deepen the picture plane, and push it further out, but it also helps catch the intense lighting coming from the left.