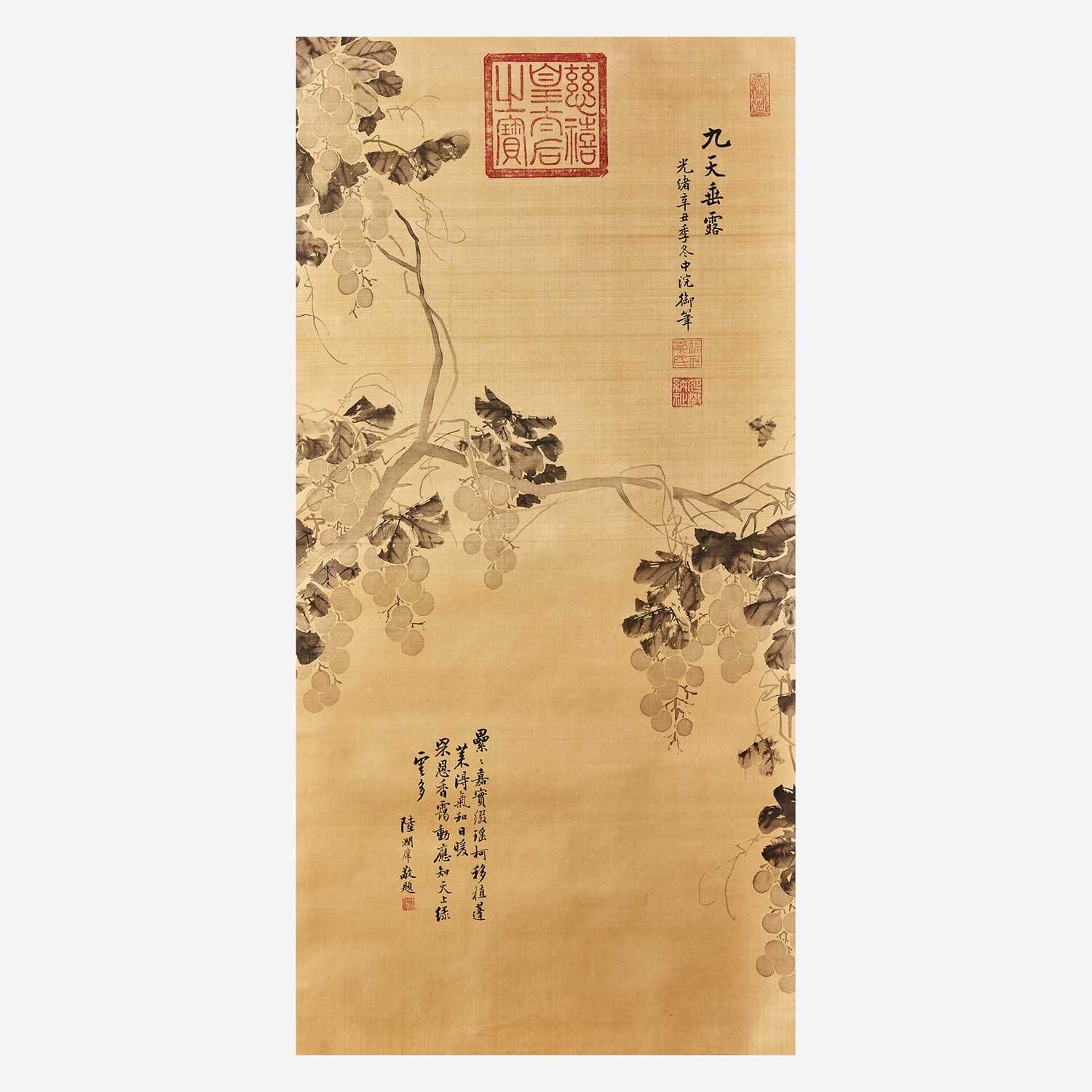 Provenance: Gift from the Empress Dowager of China, Cixi to Mr. and Mrs. Edwin. H. Conger
Thence by descent within the family

The date this work was painted and the recipients are significant. United States Congressman Conger was appointed Envoy Extraordinary and Minister Plenipotentiary to the Imperial Court of China from 1898-1905.

During this time, virulent and reactionary anti-western forces within China coalesced, culminating in the "Boxer Rebellion" as it was known in the west, led by the Society of Righteousness and Harmony movement (Yihetuan Yundong). In June of 1900, the International Legation Quarter in Beijing was besieged by the Boxers, and Conger, his wife, family, other diplomats, missionaries and other targets of the Boxers endured daily military assault, fearing for their lives until the Eight Nation Alliance came to their rescue during the Battle of Beijing. These events were recorded in a series of letters by Mrs. Conger, who later published them in "Letters from China".

Sarah Pike Conger's letters also describes her growing friendship with the Empress Dowager, the flight of the Imperial Court to Xian to avoid capture by Western forces, and Cixi's return to Beijing on January 7/8 of 1902, just before this painting was created. A photograph of Mrs. Conger and other western ladies with the Empress Dowager is in the Freer Gallery of Art and Arthur M. Sackler Gallery Archives, FSA A13 SC-GR-249 (Illustrated in Daisy Yiyou and Jan Stuart et all, "Empresses of China's Forbidden City, 1644-1912, p. 47, fig. 12.)

"Letters from China" portrays Conger as one of the few westerners who believed in making efforts to get to know the Empress and members of the court to discover common ground with the Chinese, so that with greater familiarity and understanding, the Chinese may once again take their place among the nations of the world. Conger also clearly understood the indignities and challenges the Chinese had faced, as well as foreign fear and discrimination based on ignorance.

The title of this painting may be translated as "Heavenly Dew" or "Dewdrops from the Highest Heaven". On the surface, this may be seen as a poetic description of grapes, but the concept of dew from the ninth heaven has a deeper resonance in Chinese thought. The "Ninth Heaven" or "Nine Heavens" has been variously conceived as either the highest, most profound heights of the heavens, akin to the western empyrean, or the breadth of the sky (the center and all eight cardinal directions). It is probably the first which was referred to by the Tang dynasty poet, Li Bai in his famous poem Wanglushan pubu (Wanglu mountain waterfall), where he compares the waterfall to the Milky Way, falling from Jiutian (the ninth heaven).

The concept of "Heavenly Dew" also has ancient roots in Chinese culture, where dew was seen as a rarified substance, fit for divine beings. Special bronze vessels, Chénglùpán, (dew-collecting basins) were used to harvest dew, which seemed to magically appear overnight, thus Cixi's entitling of her painting extols the fruit as something surpassing the mundane and being fit for immortals. Grapes are also symbols of fertility and abundance, with the multitude of individual fruits in a single cluster conveying numerous descendants. Such a gift from the Empress Dowager, signifying prosperity and well-being, had particular meaning, given the events of the preceding months, and Cixi's efforts to build bridges with the representatives of Western nations.

The inscribed poem, may be translated as:
"The fruits come in crowds jostling each other, embellishing the jade-like vines.
This transplanted green plant brings harmony.
Basking in warm sunshine, the fragrance livened everyone's senses
Thanks to the gathering green clouds"

Another "Imperial" painting, "Tree Peonies in Full Bloom", 1911, in the collection of the Art Institute of Chicago, also bears colophons by Lu. "Peonies" was a diplomatic gift from the Empress Dowager Longyu (1868-1913) to Mr. and Mrs. William C. Calhoun as they departed the Imperial palace in Beijing. Calhoun served as Envoy Extraordinary and Minister Plenipotentiary to China from 1909-1913.