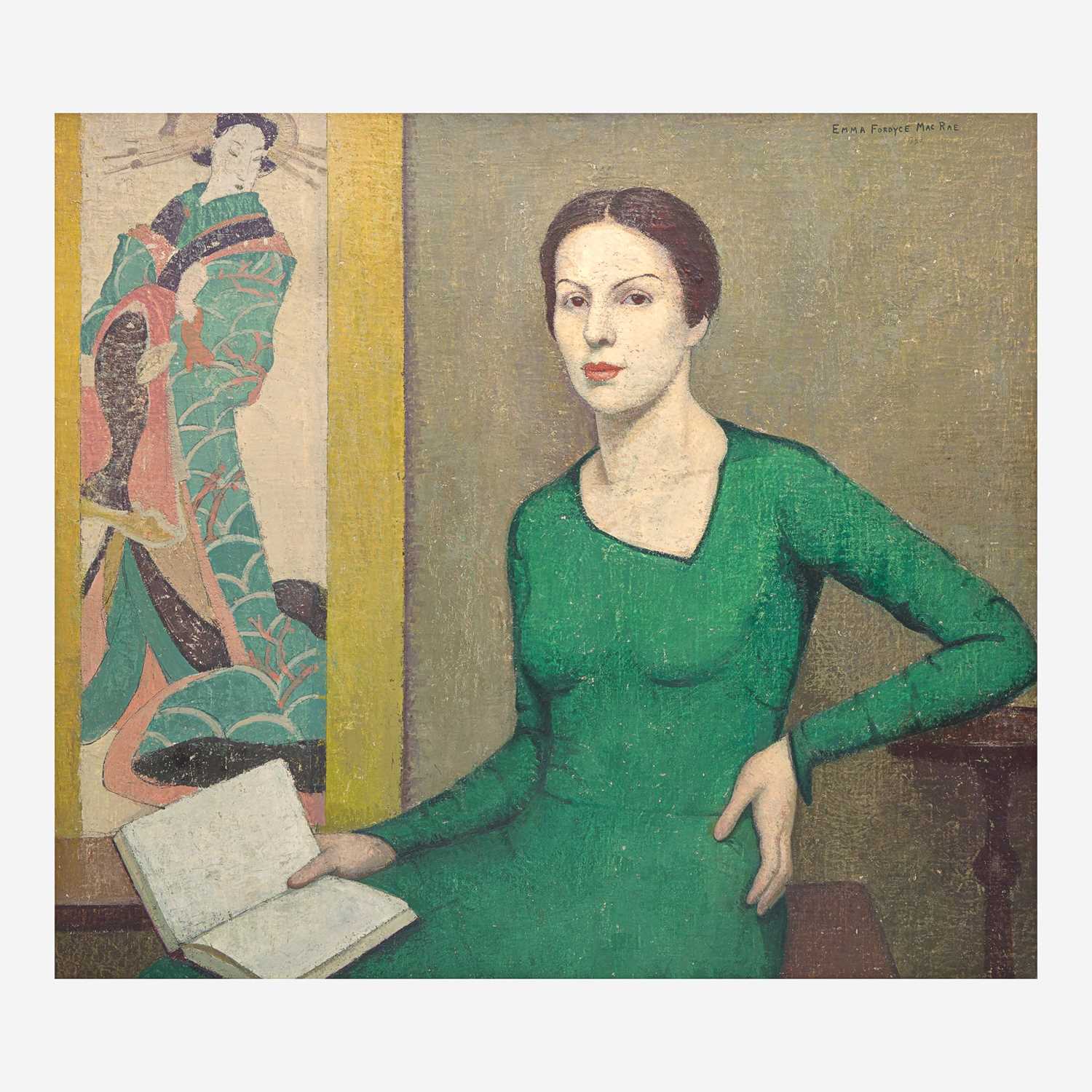 The Artist.
By descent in the family.
Private Collection, United Kingdom.

The Artist.
By descent in the family.
Private Collection, United Kingdom.

Born in Vienna to American parents, Emma Fordyce MacRae pursued part of her artistic training at the New York School of Art, where she studied under Kenneth Hayes Miller, who encouraged her sense of design and use of simplified form. She first exhbited at the Pennsylvania Academy of the Fine Arts in 1918, and joined the Philadelphia Ten in 1937, during the most productive period of her career. She later opened studios of her own in New York and Gloucester, Massachusetts and exhibited extensively on the East coast until her death in 1974.

Best known for her floral still lifes often paired with fragments of interiors or Japanesque tapestries, MacRae also received critical praise for her figural portraits of cooly detached women (usually friends or models she hired) set against a decorative background, such as Melina in Green. The present work was shown during the artist's second exhibition with the Philadelphia Ten, and sparked immediate interest, due to the contrast it offered in comparision with the other works on view. The reviewer for the Main Line Times recalled: "her portraits are arresting, not because of the people (...) but because of the extraordinary sense of pattern and harmony of time. They are simple but forceful compositions." Considered one of MacRae's finest figure paintings, Melina in Green is indeed more than just a portrait. It is a formidable arrangement of shapes and patterns, which speaks to the artist's affinity with both the Italian Quattrocento and Japanese prints. Like Mary Elizabeth Price, MacRae had an affinity for ancient techniques, especially those of the Italian Renaissance. The two artists worked differently however, and MacRae preferred to apply her paint sparingly to allow the texture of the canvas to show through, almost as a dry, plastery surface. Applied to portraiture, this technique produced a "cool, detached,... almost impersonal note," which granted her work a timeless appeal.

The present painting shows a rather mysterious woman dressed in an elegant emerald-green dress, which offers a ravishing contrast with her milky skin. Turned towards the viewer, the woman holds an open book and has placed her left hand on her hip, as if she was challenging our presence. Behind her is a neutral backdrop. A framed Japanese print of a woman dressed in a kimono hangs next to her. The Japanese figure directs her gaze towards Melina, creating a synergy between the two, as their respective palette, shapes and poses echo each other. From this confrontation results a certain akwardness, a moment lost in time. These elements are further tied together by the surface texture of the work, which adds to the overall intemporality of the scene, as if we were admiring an old fresco. As Frances R. Grant described it while her work was on view at the Roerich Museum in 1930: "A loveliness of old textures constantly suggests itself in the work of Emma Fordyce MacRae (...) Just as the human impressions of pleasure are interspun with many threads of sensation, her paintings transmit the wrap and woof of color and light, until her mood is delicately and subtly created." This is no less true of the present work than of the next lot, a highly decorative New England landscape.

Please note the proceeds of the painting's sale will go directly towards funding research into Alzheimer’s and other causes of dementia, as proned by Alzheimer's Research UK – Britain's leading dementia research charity.