Japanese Paintings and Calligraphy from the Collection of Betty Borman

Well before 20th century western artists such as Franz Kline, Pierre Soulages and Mark Tobey were exploring abstraction and the power of expressive line and restricted palette, Japanese artists were using ink as a medium to explore nature and classic themes that transcended traditional representation.

Inspired by Chinese literati and Zen practitioners, Japanese artists manipulated line, tone and gestural movement in a way that related to the execution of the calligraphic character as a means of creative expression. The depiction of expressively "drawn" written language highly influenced some of the most important artists of late Edo period Japan in the 18th and 19th centuries as evidenced by the strong exploration and abstraction of visual themes in their painting.

This interplay is wonderfully illustrated by a select group of paintings and calligraphy from the Collection of Betty Borman to be offered in our Asian Arts auctions on June 19 and 22, 2020. 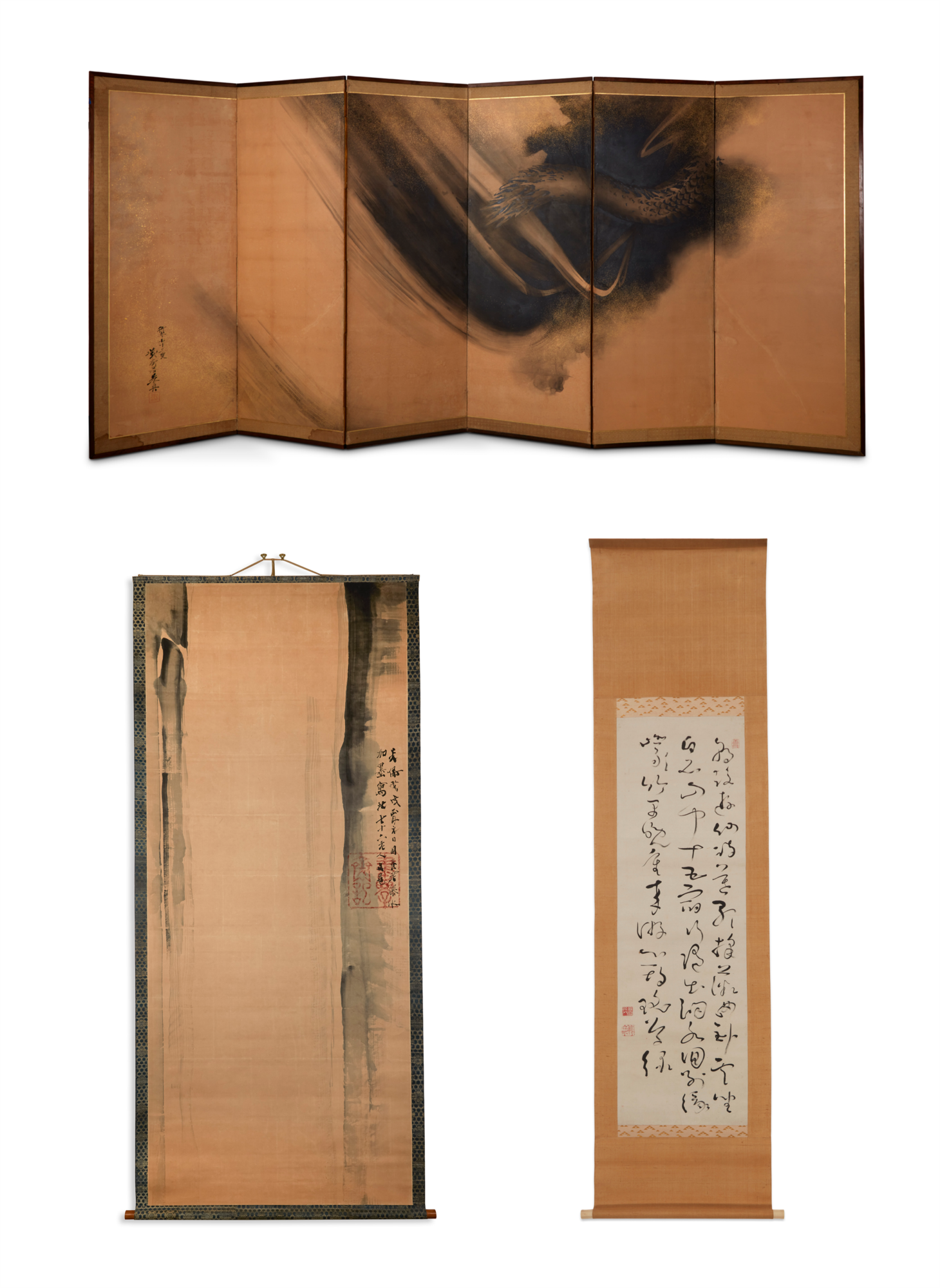 The creative uses of medium, scale, and composition are explored in the six-fold screen by Shibata Zeshin (1807-1891). Arguably one of the most innovative Japanese lacquer artists of the 19th century, Zeshin also created paintings, with some executed in lacquer techniques developed by the artist. The present screen, Lot 195, "Dragon Vanishing into Clouds", shows the tail of a dragon--an ancient symbol of power and rain--within a tight arc of dramatically graded washes, punctuated by lightning-like lighter reserves and a subtle sprinkling of gold. Like "Waterfall", as much attention is paid to the void as to the subject: the viewer is faced with literally the tail end of movement, like the fading rumble of thunder after lightning strikes among dark clouds, rendered even darker by the pale contrasting ground.

On a grand scale, Lot 194, "Waterfall", by Tani Buncho (1763-1840), one of the most influential and versatile of late Edo period artists, is a depiction of cascading volumes of water. Using both broad vertical strokes of graded ink and the dramatic and central use of the void--the unpainted paper, Buncho creates a powerful representation of natural phenomena. Quite possibly one of Buncho's largest extant works, the mural-like painting draws in and envelops the viewer; its Zen-like simplicity frees and opens the mind beyond the literal representation of an awesome environmental feature.

The elegant arcs and curves of Zeshin's screen are echoed by the sinuous energy captured in the calligraphy of Komeda Bosai (1752-1826). Bosai was one of the most sought after calligraphers of literati circles of his period. As a teacher and commentator on Chinese classics and a writer of poetry and commissioned prefaces, eulogies and inscriptions, Bosai was well-versed in various styles of writing, developing an elegant yet energetic running script, such as that illustrated here in Lot 197. The characters embody a certain fluid strength, beginning the moment the brush touches the paper and ending in "flying white" as the brush leaves the surface.