The standing-room-only auction marks one of the most successful sales of American Art & Pennsylvania Impressionists in Freeman 's recent history.

The second Sunday in December saw Freeman's winter auction of American Art & Pennsylvania Impressionists. Bidders crowded the first-floor gallery, filling every available seat and standing around the perimeter for the duration of the sale. Chairman Alasdair Nichol presided at the rostrum, taking bids from the phones, online and the room, for the nearly 160-lot auction. The sale totaled $3.33 million, including Buyer's Premium, with 83% of the lots sold. 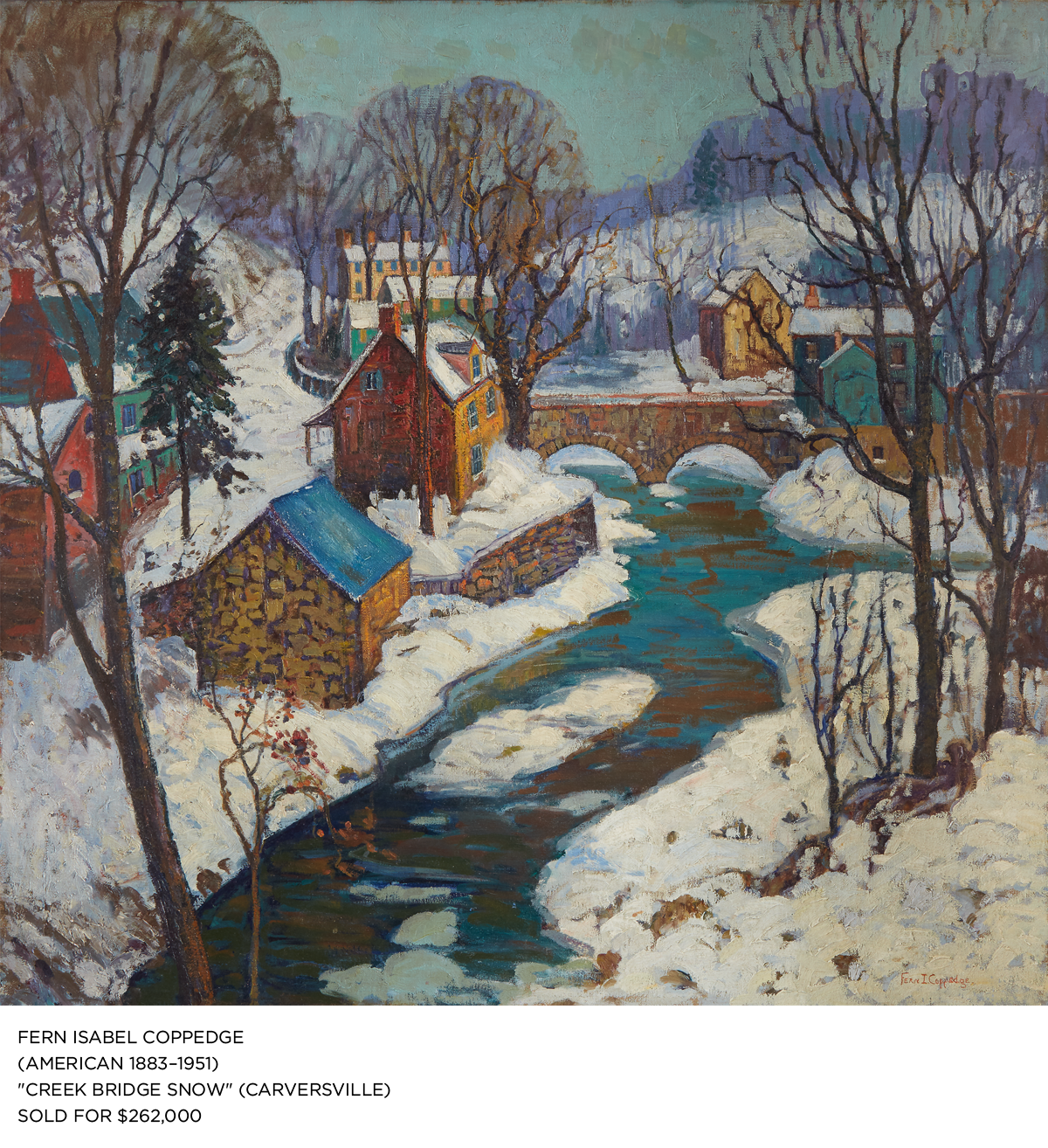 The undoubted highlight of the sale was a striking painting of a dramatic knife fight by N.C. Wyeth, "Back and Forth Across It We Went..." (Lot 94), which sold for $550,000, making it the most expensive work by Wyeth ever sold at Freeman's. The painting is an illustration for Vingie E. Roe's "The Virtue of Neils Hansen," a short-story published in Colliers Weekly in May 1915. The present lot was fresh to market, having never passed through auction before Sunday's sale.

Several lots later came an important watercolor by Andrew Wyeth, son of N.C. Wyeth. Lot 98, "At Home," depicts the summer home of President Dwight D. Eisenhower in Gettysburg, whose portrait the younger Wyeth also agreed to paint for the cover of Time Magazine in 1958. It sold for $358,000, far above its presale estimate of $100,000-150,000 to a bidder in the room, after a heated bidding war.

Works by Pennsylvania Impressionists enjoyed strong results at the auction, emphasizing Freeman's unparalleled presence in this category of collecting. Lot 119, "Creek Bridge Snow" by Fern Isabel Coppedge, depicts the Brook at Carversville, a site the artist painted numerous times. The painting soared past its estimate of $100,000-150,000, selling for $262,000, setting a world record just after another painting by Coppedge which Freeman's sold in 2006. It is the second highest price achieved for the artist since the peak of the market. Another painting by the artist, Lot 113, "Looking Up the Delaware," sold for $59,375.

"Early May – Stockton" by leading Pennsylvania Impressionist Daniel Garber (Lot 124) shows the spire of the Berean Baptist Church in Stockton, NJ, rising above a verdant landscape, and was offered in its original Harer frame. It sold for $106,250. An impressive seascape by Edward Willis Redfield, entitled "Solitude," (Lot 127) captures the rocky surf at Monhegan Island, in Maine, where the artist and his wife spent many summers. It also sold for $106,250. Lot 130, "Road to New Hope," a classic winter scene of a snowy path in the Bucks County town near Redfield's own home, sold for $100,000. 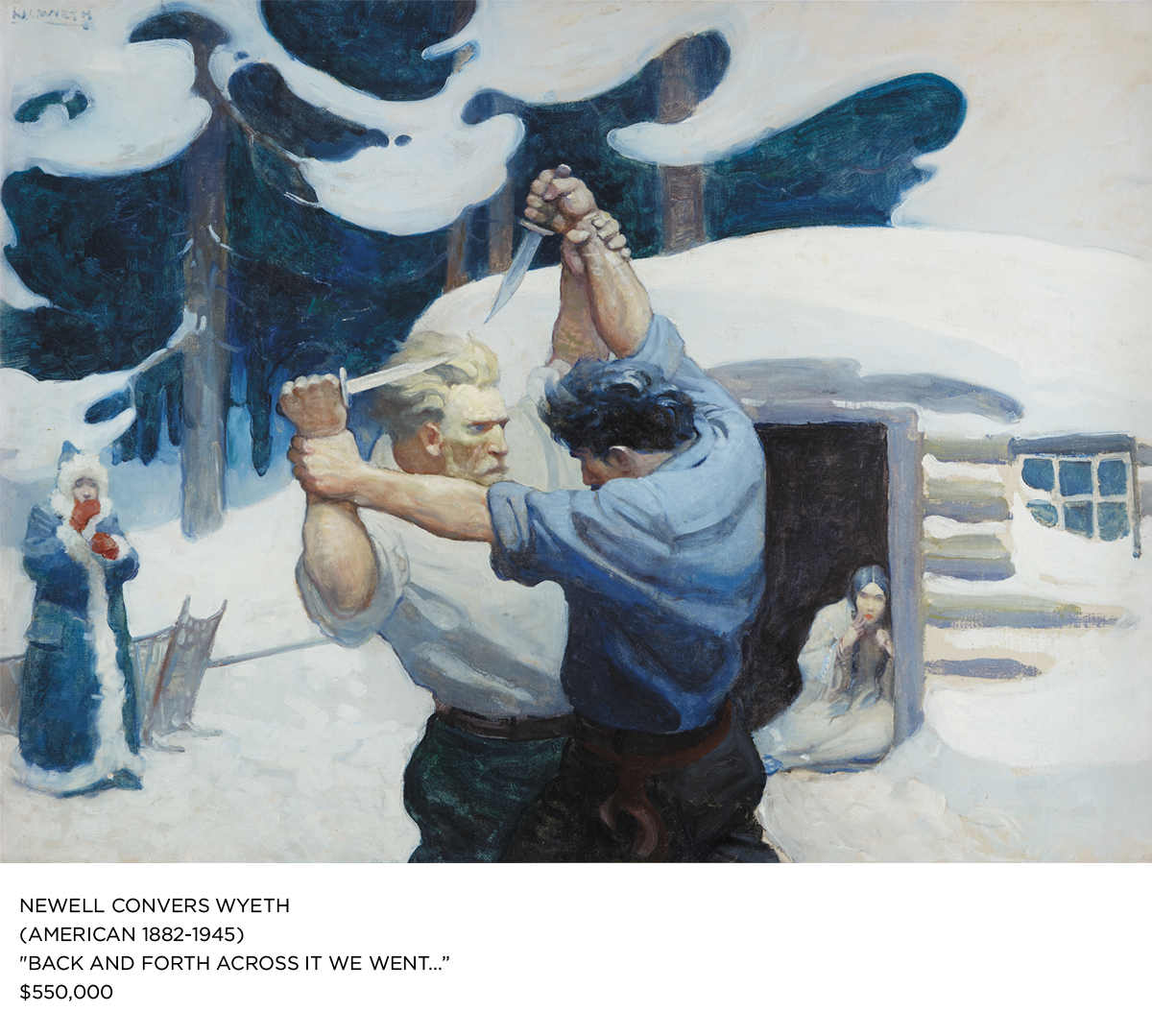 Additional highlights include Lot 73, "Road to Black Mountain," by Henry Martin Gasser, which far exceeded its presale of $10,000-15,000, when it sold for $40,625, making it the second most expensive Gasser ever sold at auction. Lot 144, "The Delaware – Winter Morning" by an artist rarely seen at auction, Charles Rosen, far surpassed its estimate when it sold for $59,375. "Ben Franklin Bridge," by Laurence A. Campbell (Lot 151) exceeded its high estimate, selling for $46,875. And a painting by Aaron Bohrod, Lot 75, "Marching in the Snow," sold for over five times its high estimate of $3,000-5,000-and became the second most expensive painting by the artist-when it sold for $28,750.

Freeman's has sold more works by the Pennsylvania Impressionists than any other auction house, and is also the only auction house to have sales dedicated to this exciting collecting area. The American Art Department is currently inviting consignments for its June 2019 auction.