Nearly 500 lots from the 18th to the 20th centuries including textiles, historical paintings and more.

An undoubted highlight of the sale is an important and rare Chippendale carved mahogany looking glass, with original phoenix cartouche, attributed to John Pollard (1740-1787) and Richard Butts (active 1768-1778), circa 1770 (Lot 104, estimate: $20,000-30,000). The craftsmen advertised their partnership in Philadelphia at the Sign of the Chinese Shield on Chestnut Street in 1773. Micro-analysis has determined the secondary woods of the glass to be white pine and Atlantic cedar. 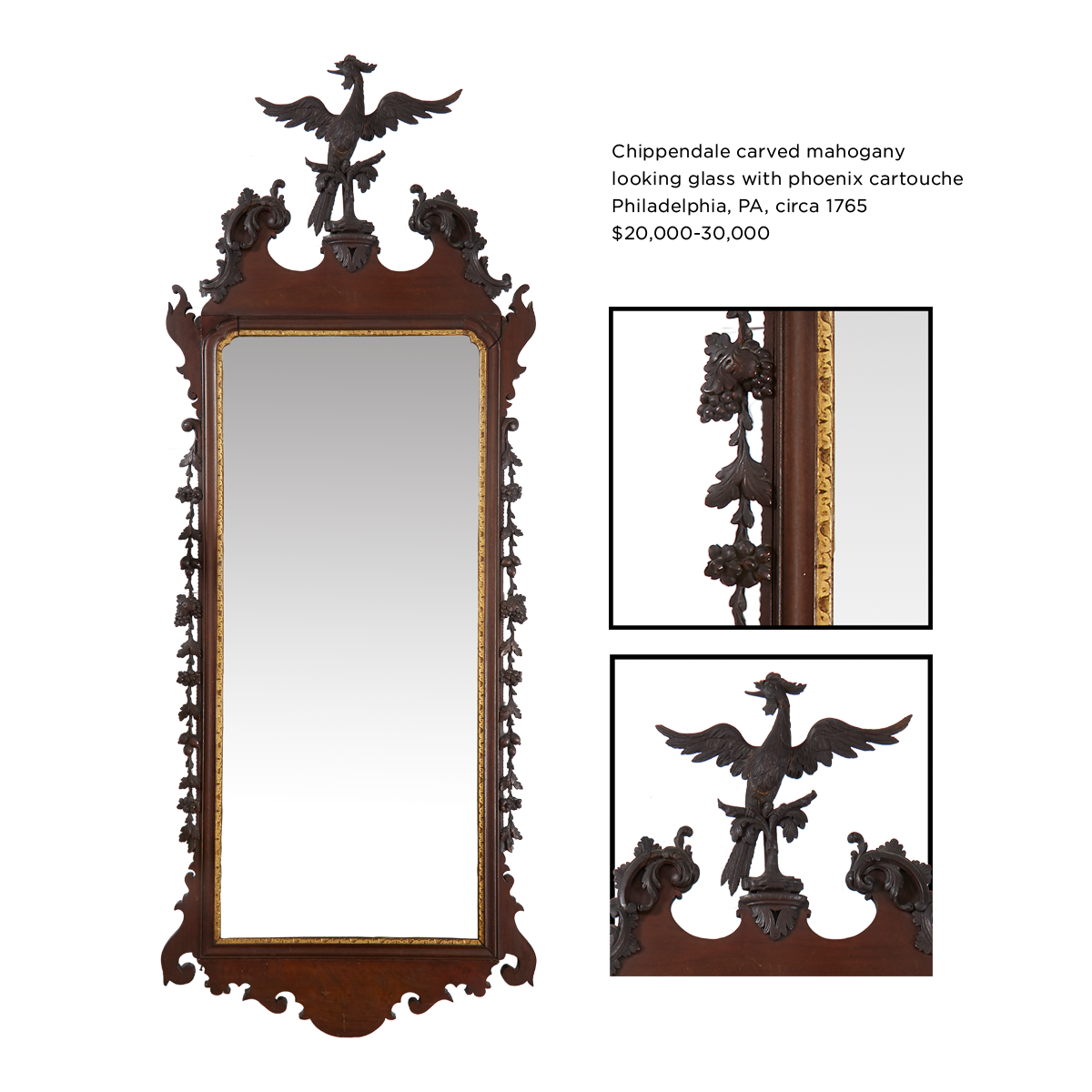 This premier example of Philadelphia Chippendale furniture joins other formal and folk pieces from the region, namely, a number of Delaware Valley Chippendale side chairs from an early Pennsylvania collection. Highlights from this collection include a set of four walnut examples each with a splat pierced with an inverted heart, circa 1770 (Lot 105, estimate: $5,000-$8,000) and a fine pair of shell-carved walnut side chairs, circa 1765 (Lot 88, estimate: $8,000-12,000). Other significant seating featured in the auction includes a rare carved mahogany Campeche chair, Mexico, early 19th century, which retains its original embossed leather (Lot 22, estimate: $8,000-$12,000) and a set of eight stained and paint- decorated Gothic Revival armchairs, circa 1900, that were used in the studio of William R. Mercer, Jr. (1858-1939), Doylestown, PA (Lot 398, estimate $2,000-$4,000). 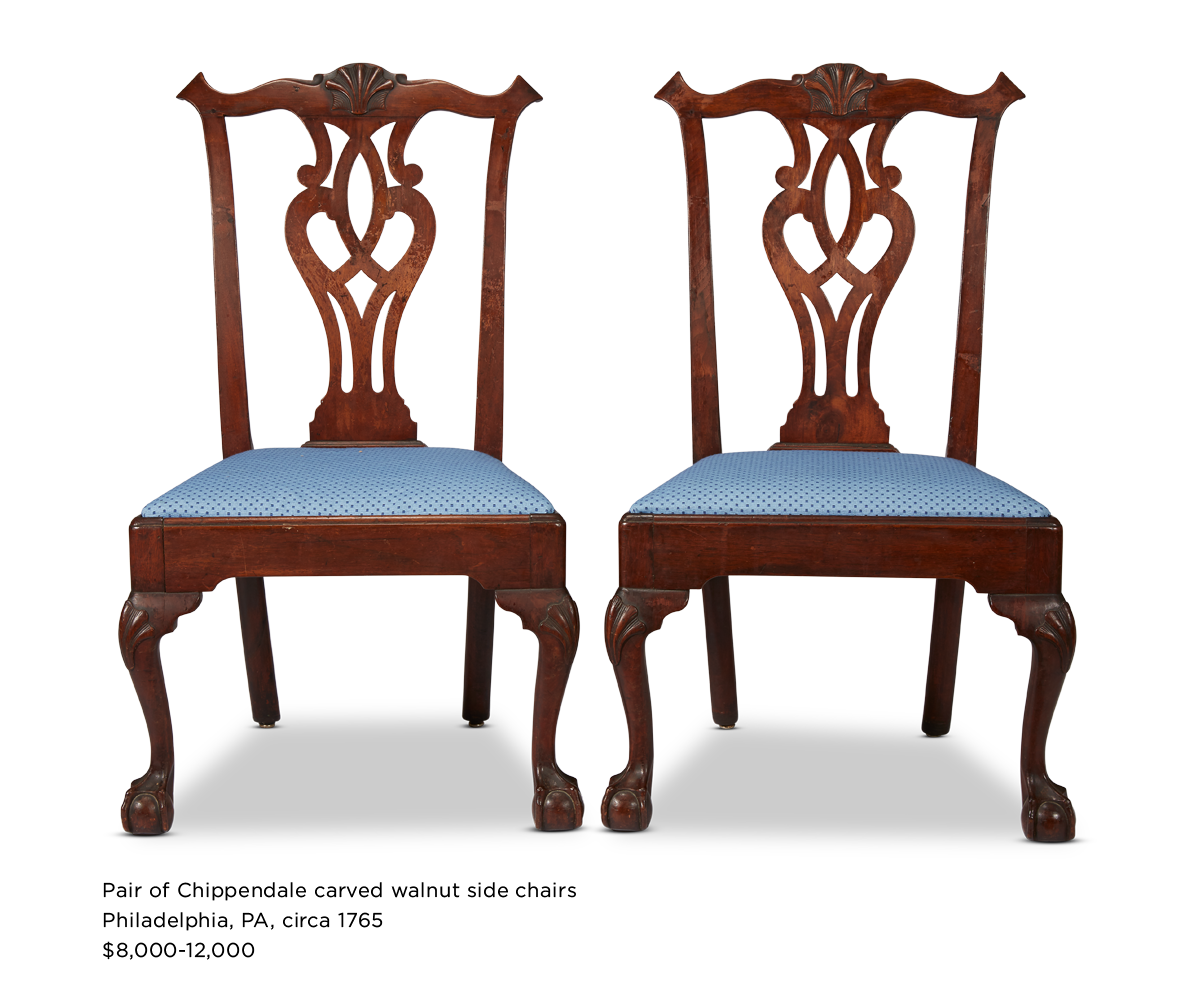 Concluding the auction are more than 60 portraits and marble busts from the Collection of the Philadelphia Bar Association, the oldest association of lawyers in the United States. A group of 71 lawyers met in 1802 and established the Law Library Company of the City of Philadelphia to share law books. Along with the purchase of legal books and manuscripts for the Law Library, portraits and sculptures were purchased and presented to honor and celebrate current and past figures of importance to the local and national legal community. The lawyers depicted in these portraits were often among Philadelphia's most famous citizens: renowned orators, educators, community and legislative leaders, as well as highly successful litigators. Highlights from the Collection include a portrait of Horace Binney (1780-1875) by Thomas Sully (1783-1872) (Lot 419, estimate: $5,000-10,000); a portrait of Joseph Reed Ingersoll (1786-1868) also by Sully (Lot 421, estimate: $4,000-6,000); and a portrait of Edward Tilghman (1750-1815) by Rembrandt Peale (1778-1860), (Lot 412, estimate: $5,000-8,000). Other artists represented in the collection are Jacob Eichholtz, John Neagle, Samuel Bell Waugh, Daniel Huntington, Albert Rosenthal and Alice Stoddard Kent, among others.