American Partisan Politics Is Nothing New

A look into the Gazette of the United States, a staging ground for early partisan politics 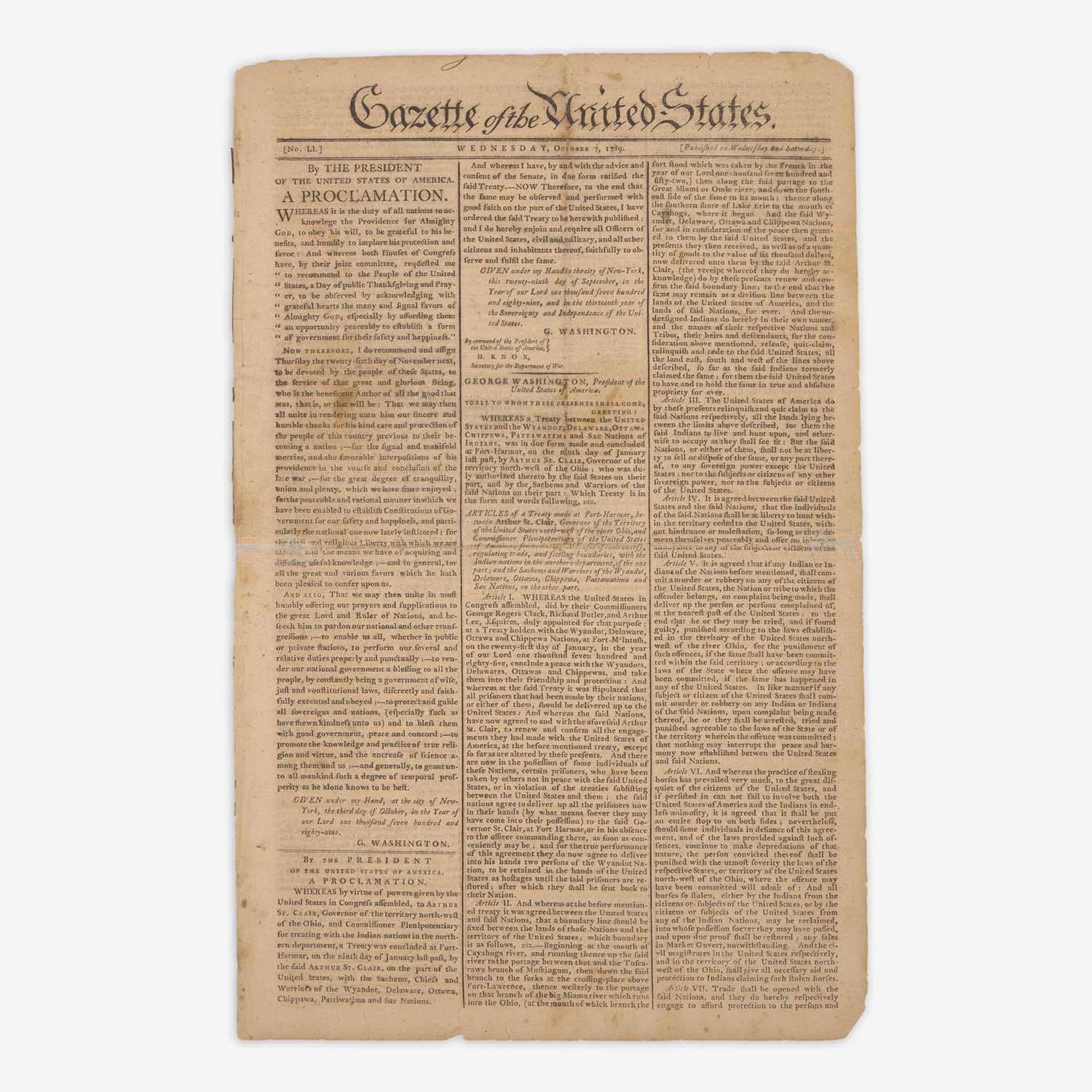 As Americans gear up for the 2022 midterm elections, the nation’s partisan divide is palpable. From text messages to lawn signs, each party’s tactics for turning out the vote in their favor are on full display. But was the nation’s political system always this partisan—and, if not, when did it emerge? In Freeman’s upcoming November 15 Books and Manuscripts: Rare Americana auction, a large collection of an important Philadelphia newspaper offers clues.

America was still in its infancy when the Gazette of the United States was first published in 1789—only thirteen years following the signing of the Declaration of Independence, and only a year after the Constitution was ratified. In its heyday, it acted as the semi-official newspaper of the United States government and regularly featured articles that championed the administrations of Presidents George Washington and John Adams. Alongside its coverage of local, national, and international news, the paper regularly printed Congressional Acts and debates, as well as essays by some of the young nation’s most prominent politicians and political thinkers—including Alexander Hamilton, Thomas Jefferson, and James Madison—and it has since come to be recognized as one of the most significant American newspapers of the late 18th century.

John Fenno, the founder of the Gazette and its editor from the newspaper’s beginning until his death in 1798, envisioned the new publication as being a mouthpiece for the new government, and whose wide publication would not only legitimize that government, but act as a means to unite Americans around it. One such unifying text on offer, Washington’s first presidential Thanksgiving Proclamation (Lot 17), printed in the October 7, 1789 edition of the paper, recommended a day of public thanksgiving to the American people, celebrating “affording them an opportunity peaceably to establish a Constitution of government for their safety and happiness.” 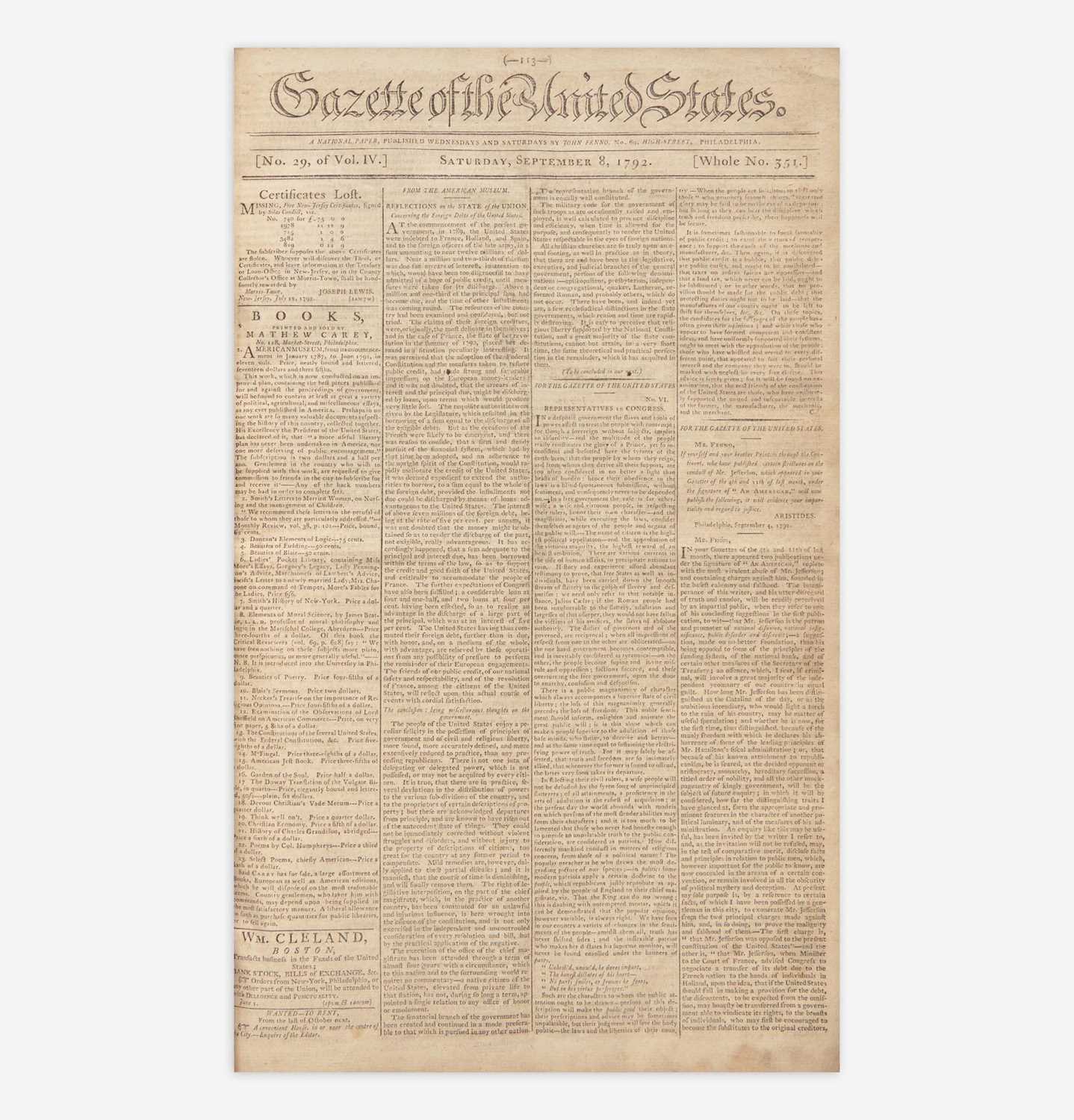 Lot 19 I Gazette of the United States

Also featured in Books and Manuscripts: Rare Americana is a remarkable and extensive collection of 131 near-continuous issues of the Gazette that span the final nine months of Washington’s first term as president and the first six months of his second term (Lot 19). This was a critical period in the early republic that saw the emergence of national partisan politics, including the formation of early political alliances that would later coalesce into America’s first political parties: The Federalists and the Democratic-Republicans.

The contentious intra-cabinet debates between Secretary of the Treasury Alexander Hamilton and Secretary of State Thomas Jefferson over the role the new government should play at home and abroad played a crucial role in this partisan emergence and is highlighted in many essays throughout this collection. As one of the nation’s most popular and widely read newspapers, the influence the Gazette wielded in the emergence of American partisan politics was vast, with Fenno’s own aims playing a role: he adopted the motto “He that is not for us, is against us.”

Fenno and the Gazette’s influential role foreshadowed how the media would come to play a central part in the nation’s partisan dialogue, a role that continues to grow and shift to this day. Freeman’s November 15 sale will have collectors vying for this collection.

View the rest of our November 15 Books and Manuscripts: Rare Americana auction.

Have something similar?
Get in touch with our Books and Manuscripts department to request a complimentary auction estimate.