Although Andrew Wyeth 's temperas are greatly renowned, watercolor was actually his central medium and technique of choice.

Andrew Wyeth first discovered watercolor while in Maine through his friend Sid Chase, and started to explore its various possibilities in order to further distinguish himself from his father, who rarely painted in this medium. Inspired by the great American watercolorists, he studied Winslow Homer's works at length, assimilating his delicate technique and impactful subject matter. Homer's late works profoundly impacted Wyeth, who slowly departed from bold compositions to venture more toward simplicity and abstraction, as is typified in the present work.

Despite the fact that he was generally reluctant to receive portrait commissions and preferred to spontaneously paint his friends or neighbors instead, Andrew Wyeth agreed to paint the official portrait of President Dwight D. Eisenhower for the cover of Time Magazine's September 7, 1959 issue. The present work was painted in the summer of 1959, and gifted to President Eisenhower while Wyeth was working on his portrait in Gettysburg, Pennsylvania – just two hours south of the artist's studio in Chadds Ford. Set in the vast garden of the President's weekend retreat, the summer scene captures a tranquil moment under the shade of an ash tree on the 189-acre farm. 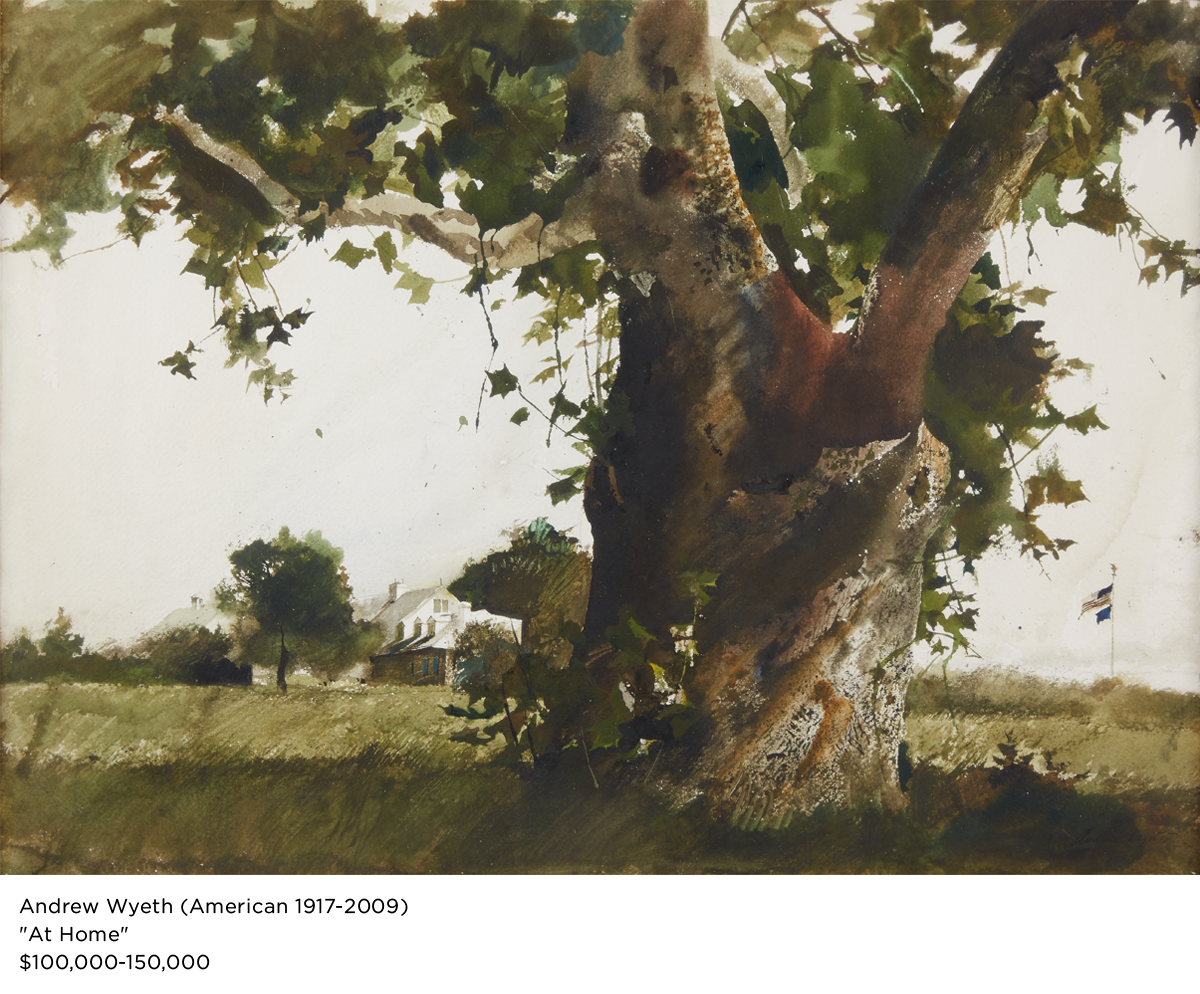 Here, Wyeth depicts the fleeting feeling of a warm summer day. Through his delicate touch and his mastery of the medium, he is able to render the effects of the soft, invisible wind on the leaves and hay, which he depicts via rapid, diagonal strokes of paint. This overall "tilting" effect is counterbalanced by the sturdy ash tree in the center of the composition, which provides a strong sense of stability. While Wyeth covers most of the paper with color, he purposefully leaves the white portions untouched, providing a bright source of light which gently illuminates the farm. The artist's soft greens and browns evoke Pennsylvania's lush and bucolic landscapes, reinforcing a sense of calm and gentle stillness to the setting. Of Wyeth's landscapes John Wilmerding writes: "[they] often seem as distilled and abstracted as still lifes, focusing on fragments of nature or objects within the view, or composed with a still-life sensibility." The scene Wyeth presents here is far from grand. In fact, it offers a touching contrast to the official portrait of the President, and leads to a more honest depiction of a modest house, bespeaking its modest inhabitant.

President Eisenhower's connection to Gettysburg began in 1915, when he visited the area on a West Point class trip. He came back to Camp Colt during World War I, where he trained soldiers for the United States Army's Tank Corps. President Eisenhower and his wife Mamie purchased the farm in 1950 from Allen Redding, who had owned it since 1921. Modest in size, the home served as the couple's residence and was visited by many foreign dignitaries during the President's tenure. On weekends, the Eisenhowers entertained family and friends at the farm. The President enjoyed playing golf and shooting at his skeet range. Eisenhower officially retired to Gettysburg in 1961, where he lived until his death in 1969. Two years before, the Eisenhowers gifted the house to the federal government, which designated it a National Historic Site, which was then authorized by an act of Congress in 1969. The National Park Service opened the site to the public in 1980, one year after the passing of President Eisenhower's widow. 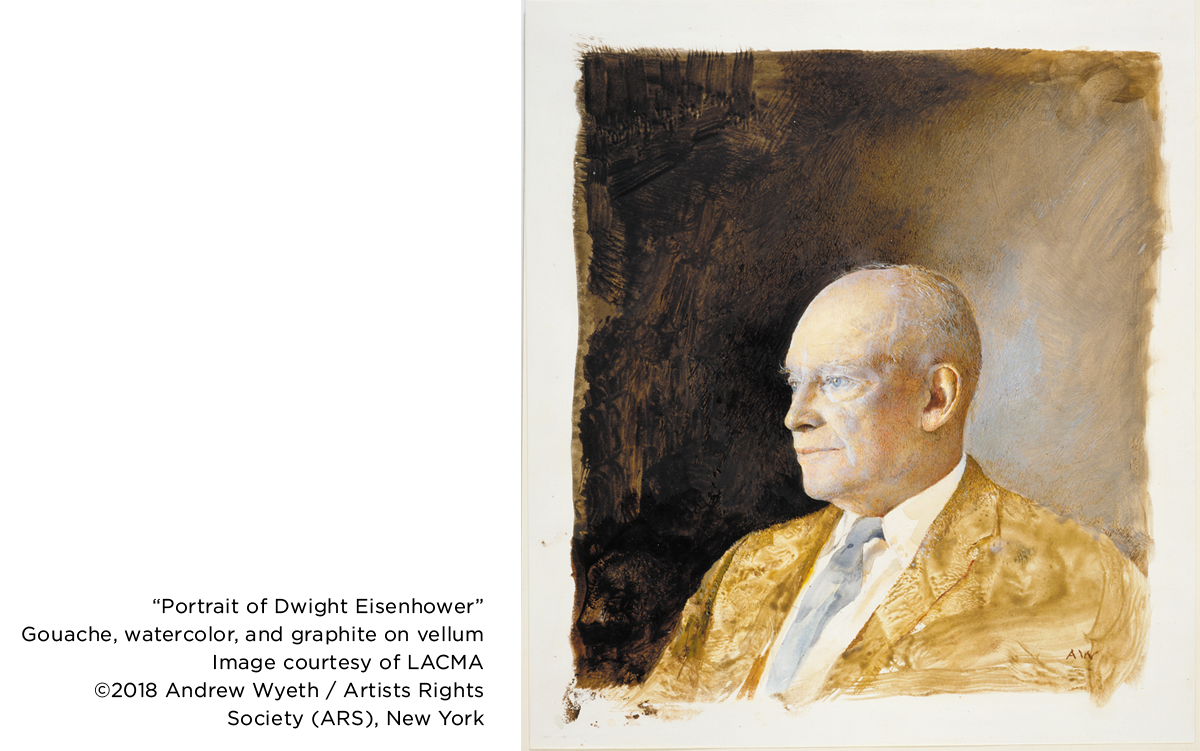 In a letter addressed to the President on October 7, 1959, Wyeth writes from his summer home in Cushing, Maine: "... About the title for the watercolor. Here along the coast of New England, one always knows when the captain is home by the flag flying. That is one of the things I clearly remember as I sat painting your farm – the flapping of the flags as they blew in the wind. Would the title "At Home" be agreeable to you?..." Eisenhower often said he could feel the "forgotten heroisms" that occurred on the grounds of his farm, during the 1863 battle of Gettysburg. Sensitive to Eisenhower's military statute, and attuned to the history of the land, Wyeth here instills a sense of meditative contemplation. With its simple geometry, the farm stands in the distance like a silent witness to the past, while the flags on the right flap timelessly.